Encyclopedia
Punta del Este is a resort town
Resort town
A resort town, sometimes called a resort city or resort destination, is a town or area where tourism or vacationing is a primary component of the local culture and economy...
on the Atlantic Coast in the Maldonado Department
Maldonado Department
The Maldonado Department , with an area of and 140,192 inhabitants, is located to the southeast of Uruguay. Its capital is Maldonado.-Geography and climate:...
of southeastern Uruguay
Uruguay
Uruguay ,officially the Oriental Republic of Uruguay,sometimes the Eastern Republic of Uruguay; ) is a country in the southeastern part of South America. It is home to some 3.5 million people, of whom 1.8 million live in the capital Montevideo and its metropolitan area...
. It is located on the intersection of Route 10
Route 10 (Uruguay)
Route 10 is a national route of Uruguay. In 1983, it was assigned the name Juan Díaz de Solís, after a national hero of Uruguay.The distance notation along Route 10 uses the same Kilometre Zero reference as Routes 1, 3, 5, 6, 7, 8, 9 and IB, which is the Pillar of Peace of Plaza de Cagancha in the...
with Route 39, directly southeast of the department capital Maldonado
Maldonado, Uruguay
Maldonado is the capital of Maldonado Department of Uruguay. It is located on Route 39 and shares borders with Punta del Este to the south, Pinares - Las Delicias to the south and to the east and suburb La Sonrisa to the north. Together they all for a unified metropolitan area. East of the city...
and about 140 kilometres (87 mi) east of Montevideo
Montevideo
Montevideo is the largest city, the capital, and the chief port of Uruguay. The settlement was established in 1726 by Bruno Mauricio de Zabala, as a strategic move amidst a Spanish-Portuguese dispute over the platine region, and as a counter to the Portuguese colony at Colonia del Sacramento...
. Although the city has a year-round population of about 7,300, the summer tourist boom often boosts the population by an extra 500,000.

The first Europeans to set foot in what is now Punta del Este were the Spanish at the beginning of the 16th century. However, the colonization of the area actually began around Maldonado at the end of the 18th century due to Portuguese expansionism. Punta del Este and its surroundings (Maldonado and Punta Ballena for example) at the end of the 19th century were kilometers of sand and dunes, but in 1896 Antonio Lussich
Antonio Lussich
Antonio Dionisio Lussich was an Uruguayan sailor, arboricultorist and writer.-Family background:...
bought 4,447 acres (1800 hectares) of uninhabited land and there he started a botanic garden and planted trees and plants from all over the world. Later the trees started to spread on their own, and now the area is full mostly of Pine
Pine
Pines are trees in the genus Pinus ,in the family Pinaceae. They make up the monotypic subfamily Pinoideae. There are about 115 species of pine, although different authorities accept between 105 and 125 species.-Etymology:...
s, Eucalyptus
Eucalyptus
Eucalyptus is a diverse genus of flowering trees in the myrtle family, Myrtaceae. Members of the genus dominate the tree flora of Australia...
, Acacias
Acacia longifolia
Acacia longifolia is a species of Acacia native to southeastern Australia, from the extreme southeast of Queensland, eastern New South Wales, eastern and southern Victoria, and southeastern South Australia. Common names for it include Acacia Trinervis, Aroma Doble, Golden Wattle, Coast Wattle,...
and various species of bushes
Shrub
A shrub or bush is distinguished from a tree by its multiple stems and shorter height, usually under 5–6 m tall. A large number of plants may become either shrubs or trees, depending on the growing conditions they experience...
. Its status was elevated to "City" category 2 July 1957 by decree Ley No. 12.397.

In 2004, Punta del Este had a population of 7,298. During the 2004 census, there were 2,943 households in the department. The average household size was 2.4 persons. For every 100 females, there were 91.6 males.
Source: Instituto Nacional de Estadística de Uruguay

Punta del Este has scenic coasts and beaches.
There are two types of coastlines: Brava and Mansa. This shows the end of the Río de la Plata
Río de la Plata
The Río de la Plata —sometimes rendered River Plate in British English and the Commonwealth, and occasionally rendered [La] Plata River in other English-speaking countries—is the river and estuary formed by the confluence of the Uruguay River and the Paraná River on the border between Argentina and...
(River of Silver) on one side and the beginning of the Atlantic Ocean
Atlantic Ocean
The Atlantic Ocean is the second-largest of the world's oceanic divisions. With a total area of about , it covers approximately 20% of the Earth's surface and about 26% of its water surface area...
, on the other side. Every beach of the peninsula has public access. There are quiet and calm water beaches while others have strong waves, white and fine sand or thick and golden ones. The split between wave types is around the Monumento al Ahogado
Monumento al Ahogado
Monumento al Ahogado is a sculpture of five fingers partially submerged in sand, located on Parada 1 at Brava Beach in Punta del Este, a popular resort town in Uruguay. It is colloquially referred to as either Monumento los Dedos or La Mano...
, which the sculptor designed to warn swimmers that the rough waves could cause them to drown. 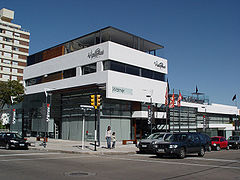 The city has much colonial
Colonialism
Colonialism is the establishment, maintenance, acquisition and expansion of colonies in one territory by people from another territory. It is a process whereby the metropole claims sovereignty over the colony and the social structure, government, and economics of the colony are changed by...
architecture
Architecture
Architecture is both the process and product of planning, designing and construction. Architectural works, in the material form of buildings, are often perceived as cultural and political symbols and as works of art...
contrasting with more modern buildings. Nowadays it has a scenic shore, typical resort houses, modern buildings, a port with mooring capacity, department stores, restaurants, and pubs.
There are several large houses, and gardens lined with plants.

Artigas square, over Gorlero Ave is the place where there is a popular handicraft market.

This icon of Punta del Este is an artwork by the Uruguayan painter and sculptor Carlos Páez Vilaró. It sits atop Punta Ballena
Punta Ballena
Punta Ballena is a small peninsula and a resort , as well as an important tourist attraction on the coast of Río de la Plata in the Maldonado Department of southeastern Uruguay. It comprises an approximately long stripe of beaches and landforms and extends on both sides of Route 10...
, as one of the main attractions of the peninsula. The artist began working on the project in 1958, and took 36 years to be completed.

It is universally considered as a “living sculpture
Living sculpture
Living sculpture is any type of sculpture that is created with living, growing grasses, vines, plants or trees. It can be functional and/or ornamental...
”. Inside this masterpiece there are many rooms facing the sea. It also boasts sculpture
Sculpture
Sculpture is three-dimensional artwork created by shaping or combining hard materials—typically stone such as marble—or metal, glass, or wood. Softer materials can also be used, such as clay, textiles, plastics, polymers and softer metals...
s, painting
Painting
Painting is the practice of applying paint, pigment, color or other medium to a surface . The application of the medium is commonly applied to the base with a brush but other objects can be used. In art, the term painting describes both the act and the result of the action. However, painting is...
s and ceramic
Ceramic
A ceramic is an inorganic, nonmetallic solid prepared by the action of heat and subsequent cooling. Ceramic materials may have a crystalline or partly crystalline structure, or may be amorphous...
s made by its creator. During the summer season there are sunset classical music
Classical music
Classical music is the art music produced in, or rooted in, the traditions of Western liturgical and secular music, encompassing a broad period from roughly the 11th century to present times...
concerts. It is possible to view the sunrise over the Atlantic Ocean
Atlantic Ocean
The Atlantic Ocean is the second-largest of the world's oceanic divisions. With a total area of about , it covers approximately 20% of the Earth's surface and about 26% of its water surface area...
and the sunset over the Río de la Plata
Río de la Plata
The Río de la Plata —sometimes rendered River Plate in British English and the Commonwealth, and occasionally rendered [La] Plata River in other English-speaking countries—is the river and estuary formed by the confluence of the Uruguay River and the Paraná River on the border between Argentina and...
in Punta Ballena.

The lighthouse is 45 metres tall, and the crystal panels which are part of its illumination system were brought from France. It works by electricity, with acetylene gas as emergency backup.
It is possible to climb the 150 steps of its spiral staircase.

This island of 21 hectares of surface is daily visited to enjoy its two beaches: Garden Port and Honda beach.
It consists of a natural port, with ships anchoring close to it, and it also became a popular area to practice water sports.

The city is served by Capitán de Corbeta Carlos A. Curbelo International Airport, being the second most important of Uruguay, located near Laguna del Sauce on the outskirts of the city. This modern airport opened in 1996. It offers domestic and international flights within the region.

Punta del Este can be reached from Buenos Aires
Buenos Aires
Buenos Aires is the capital and largest city of Argentina, and the second-largest metropolitan area in South America, after São Paulo. It is located on the western shore of the estuary of the Río de la Plata, on the southeastern coast of the South American continent...
by ferryboat to Montevideo (the capital city), 140 km from Punta del Este, and then by car or bus.