Encyclopedia
Puerto Ordaz is a planned city which, together with the older settlement of San Felix, forms Ciudad Guayana
Ciudad Guayana
Ciudad Guayana is a city in Bolívar State, Venezuela. It lies south of the Orinoco, where the river is joined by the Caroní River. The city, officially founded in 1961, is actually composed of the old town of San Félix at the east and the new town of Puerto Ordaz at the west, which lie either...
in Bolívar State, eastern Venezuela
Venezuela
Venezuela , officially called the Bolivarian Republic of Venezuela , is a tropical country on the northern coast of South America. It borders Colombia to the west, Guyana to the east, and Brazil to the south...
. Puerto Ordaz is located at the confluence of the Caroní
Caroní River
The Caroni River is the second most important river of Venezuela, the second in flow, and one of the longest, 952 km from the Tepui Kuquenan, where she originates with the same name Kuquenan, up to its confluence with the River Orinoco to which basin she belongs...
and Orinoco
Orinoco
The Orinoco is one of the longest rivers in South America at . Its drainage basin, sometimes called the Orinoquia, covers , with 76.3% of it in Venezuela and the remainder in Colombia...
Rivers and is the site of the Llovizna Falls
Llovizna falls
Llovizna falls is a waterfall on the Caroní River, close to its confluence with the Orinoco, are located in the Llovizna Park, Puerto Ordaz, Venezuela...
. There are bridges across the Caroni and a new bridge across the Orinoco (Second Orinoco crossing
Second Orinoco crossing
The Second Orinoco crossing or Orinoquia Bridge is a combined road and railway bridge over the Orinoco River near Ciudad Guayana, Venezuela. It was inaugurated on November 13, 2006 and named Orinoquia Bridge...
). It is one of Venezuela's largest cities and is the base for large iron
Ironworks
An ironworks or iron works is a building or site where iron is smelted and where heavy iron and/or steel products are made. The term is both singular and plural, i.e...
and steelworks and aluminium industries. The city has a large hydroelectric power plant, Macagua Dam
Macagua Dam
The Macagua Dam, officially known as Antonio José de Sucre, is an embankment dam with concrete gravity sections on the Caroní River in Ciudad Guayana, Bolívar State, Venezuela. It is upstream from the confluence of the Caroni and Orinoco Rivers, downstream of the Guri Dam and downstream of the...
.

Due to its planned nature, the city has a drastically different feel to it than many other South American cities. The towers of the Alta Vista district recall New York
New York
New York is a state in the Northeastern region of the United States. It is the nation's third most populous state. New York is bordered by New Jersey and Pennsylvania to the south, and by Connecticut, Massachusetts and Vermont to the east...
, and many of the residential neighborhoods have architecture and landscaping that are similar to suburbs in the United States in the 1950s, including 'cookie cutter' homes, sidewalks, and patterned lawns.

Many of Venezuela's prime industries are based in Puerto Ordaz. These include Alcasa, Venalum, Bauxilum, Carbonorca (primary aluminium manufacturers and anode suppliers for the aluminium industry), Ferrominera (iron ore processing), and Ternium Sidor (Orinoco Steelmaking). The country's main electricity producer, Edelca, and the regional development office, CVG (Corporación Venezolana de Guayana
Corporación Venezolana de Guayana
The Corporacion Venezolana de Guayana is a decentralized state-owned Venezuelan conglomerate, located in the Guayana Region in the southeast of the country. Its subsidiaries include the aluminium producer Alcasa....
), are also located in Puerto Ordaz..

The port of Puerto Ordaz in a combination of piers (muelles), all under the control of CVG, of which only one is considered for public use. The others are directly related to the CVG production companies in principal all aluminium related, approximately 9 piers in total. One of the most frequently used piers is Ferrominera at the mouth of the Caroni river. Another is Ternium Sidor (recently nationalised into a CVG company, and the only steel works) at mile 197.

In Puerto Ordaz is located the electricity industry of Caroní (Edelca) which manage several of the hydroelectric centrals over the Caroní river: Macagua I and II and Caruachi, all of the 3 located on the urban side of Ciudad Guayana
Ciudad Guayana
Ciudad Guayana is a city in Bolívar State, Venezuela. It lies south of the Orinoco, where the river is joined by the Caroní River. The city, officially founded in 1961, is actually composed of the old town of San Félix at the east and the new town of Puerto Ordaz at the west, which lie either...
. Edelca also built and administers Guri (currently the world's second biggest dam, in terms of the capacity of hydroelectric generation) and gave origin to the Guri reservoir, the second biggest lake in Venezuela. Puerto Ordaz is also the only city in the world with a hydroelectric dam in the middle of the city. Both the city, Puerto Ordaz, and Venezuela use some of the hydroelectric power from Guri Dam. 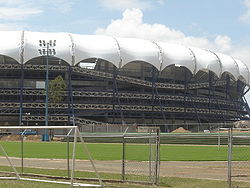 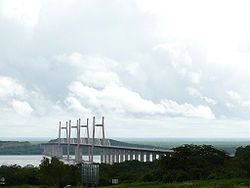 Puerto Ordaz is conformated by Caroní Municipality. Venezuelan law specifies that municipal governments have four main functions: executive, legislative, comptroller, and planning. The executive function is managed by the mayor
Mayor
In many countries, a Mayor is the highest ranking officer in the municipal government of a town or a large urban city....
, who is in charge of representing the municipality's administration. The legislative branch is represented by the Municipal Council, composed of seven councillors, charged with the deliberation of new decrees and local laws. The comptroller tasks are managed by the municipal comptroller
Comptroller
A comptroller is a management level position responsible for supervising the quality of accounting and financial reporting of an organization.In British government, the Comptroller General or Comptroller and Auditor General is in most countries the external auditor of the budget execution of the...
's office, which oversees accountancy
Accountancy
Accountancy is the process of communicating financial information about a business entity to users such as shareholders and managers. The communication is generally in the form of financial statements that show in money terms the economic resources under the control of management; the art lies in...
. Finally, planning is represented by the Local Public Planning Council, which manages development projects for the municipality.

Puerto Ordaz is crisscrossed from north to south and east to west by numerous avenues. Some of them are:

In Puerto Ordaz the principal recreation centers are:

Puerto Ordaz is also well known for having one of the best engineering
Engineering
Engineering is the discipline, art, skill and profession of acquiring and applying scientific, mathematical, economic, social, and practical knowledge, in order to design and build structures, machines, devices, systems, materials and processes that safely realize improvements to the lives of...
schools in Latin America. The main universities are:

Inside the city both the Llovizna and Cachamay Parks are located displaying their picturesque waterfall
Waterfall
A waterfall is a place where flowing water rapidly drops in elevation as it flows over a steep region or a cliff.-Formation:Waterfalls are commonly formed when a river is young. At these times the channel is often narrow and deep. When the river courses over resistant bedrock, erosion happens...
s. Other local attractions are the Caroní Ecomuseum located at the Macagua Dam. Near the city from the Angosturita bridge to the San Félix port the union of the Caroní and Orinoco rivers can be seen; the different colors of the water of both rivers make a very distinct demarcation line. Taking Puerto Ordaz as a starting point, the Orinoco Delta can be visited as well as Canaima's National Park and Guri's reservoirs. Other points of interest are the colonial castles at the Orinoco riverside and the "Cerro del Elefante" (Elephant's hill) which can be reached in a 4x4 vehicle. The Castles of Guayana are located at the right side of the Orinoco River, about 35 kilometers from San Félix.