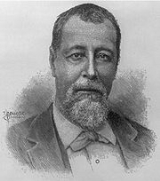 Encyclopedia
Justo Rufino Barrios was a President of Guatemala
President of Guatemala
The title of President of Guatemala has been the usual title of the leader of Guatemala since 1839, when that title was assumed by Mariano Rivera Paz...
known for his liberal
Liberalism
Liberalism is the belief in the importance of liberty and equal rights. Liberals espouse a wide array of views depending on their understanding of these principles, but generally, liberals support ideas such as constitutionalism, liberal democracy, free and fair elections, human rights,...
reforms and his attempts to reunite Central America
Central America
Central America is the central geographic region of the Americas. It is the southernmost, isthmian portion of the North American continent, which connects with South America on the southeast. When considered part of the unified continental model, it is considered a subcontinent...
. 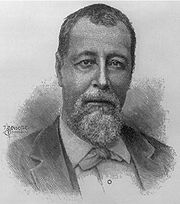 Barrios instituted a number of reforms, including freedom of the press. He attacked the Catholic Church, limiting its power and confiscating its property. He was elected President in May 1873.

Barrios oversaw substantial cleaning and rebuilding of Guatemala City, and set up a new and accountable police force. He brought the first telegraph lines and railroads to the Republic. He established a system of public schools in the country.

In 1879, a constitution was ratified for Guatemala (the Republic's first as an independent nation, as the old Conservador regime had ruled by decree). In 1880, Barrios was reelected President for a six-year term. Barrios unsuccessfully attempted to get the United States of America
United States
The United States of America is a federal constitutional republic comprising fifty states and a federal district...
to mediate the disputed boundary between Guatemala and Mexico
Mexico
The United Mexican States , commonly known as Mexico , is a federal constitutional republic in North America. It is bordered on the north by the United States; on the south and west by the Pacific Ocean; on the southeast by Guatemala, Belize, and the Caribbean Sea; and on the east by the Gulf of...
.

Guatemala, El Salvador, and Honduras agreed to reform the Central American Union, but then Salvadoran President Zaldivar decided to withdraw from the Union, and sent envoys to Mexico to join in an alliance to overthrow Barrios. Mexican President Porfirio Díaz
Porfirio Díaz
José de la Cruz Porfirio Díaz Mori was a Mexican-American War volunteer and French intervention hero, an accomplished general and the President of Mexico continuously from 1876 to 1911, with the exception of a brief term in 1876 when he left Juan N...
feared Barrios' liberal reforms and the potential of a strong Central America as a neighbor if Barrios' plans bore fruit. Díaz sent Mexican troops to seize the disputed land of Soconusco
Soconusco
Soconusco is a region of the Mexican state of Chiapas, located in the extreme south of the state and separated from Guatemala by the Suchiate River. It is a region of rich lowlands and foothills. The economic center is Tapachula. Soconusco consists of 16 municipalities.The name comes from the...
. Meanwhile, Barrios was personally leading the army into El Salvador, where he was killed at Chalchuapa
Chalchuapa
Chalchuapa is a town and a municipality located in the Santa Ana department of El Salvador. The city of Chalchuapa is in a wide valley at 650 meters above sea level, and watered by the Pampe River.- Overview :...
, El Salvador. Much of the hope for a reunited Central America died with him.