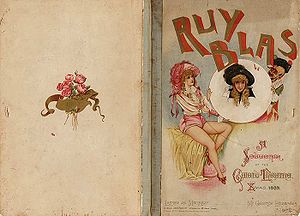 A programme or program is a booklet available for patrons attending a live event such as theatre
Theatre
Theatre is a collaborative form of fine art that uses live performers to present the experience of a real or imagined event before a live audience in a specific place. The performers may communicate this experience to the audience through combinations of gesture, speech, song, music or dance...
performances, fête
Fête
Fête is a French word meaning festival, celebration or party, which has passed into English as a label that may be given to certain events.-Description:It is widely used in England and Australia in the context of a village fête,...
s, sport
Sport
A Sport is all forms of physical activity which, through casual or organised participation, aim to use, maintain or improve physical fitness and provide entertainment to participants. Sport may be competitive, where a winner or winners can be identified by objective means, and may require a degree...
s events, etc. It is a printed leaflet outlining the parts of the event scheduled to take place, principal performers and background information. In the case of theatrical performances, the term playbill is also used. It may be provided free of charge by the event organisers or a charge may be levied.

At a theatre
Theatre
Theatre is a collaborative form of fine art that uses live performers to present the experience of a real or imagined event before a live audience in a specific place. The performers may communicate this experience to the audience through combinations of gesture, speech, song, music or dance...
, opera
Opera
Opera is an art form in which singers and musicians perform a dramatic work combining text and musical score, usually in a theatrical setting. Opera incorporates many of the elements of spoken theatre, such as acting, scenery, and costumes and sometimes includes dance...
, or ballet
Ballet
Ballet is a type of performance dance, that originated in the Italian Renaissance courts of the 15th century, and which was further developed in France and Russia as a concert dance form. The early portions preceded the invention of the proscenium stage and were presented in large chambers with...
performance it is usually given at the door in the United States
United States
The United States of America is a federal constitutional republic comprising fifty states and a federal district...
, while it is usually sold in the United Kingdom
United Kingdom
The United Kingdom of Great Britain and Northern IrelandIn the United Kingdom and Dependencies, other languages have been officially recognised as legitimate autochthonous languages under the European Charter for Regional or Minority Languages...
. The Broadway
Broadway theatre
Broadway theatre, commonly called simply Broadway, refers to theatrical performances presented in one of the 40 professional theatres with 500 or more seats located in the Theatre District centered along Broadway, and in Lincoln Center, in Manhattan in New York City...
programme is similar to a television network, in that it makes its money from selling advertisements. A programme company pays the theatre for the rights to produce the production’s programmes, which is contrary to common belief that the theatre pays the programme company. The programme generally contains photos of the production, a cast list, biographies of the actors and production staff involved, the name of the theatre, background information, and can contain advertisements. For example, the programme for the original production of Man of La Mancha
Man of La Mancha
Man of La Mancha is a musical with a book by Dale Wasserman, lyrics by Joe Darion and music by Mitch Leigh. It is adapted from Wasserman's non-musical 1959 teleplay I, Don Quixote, which was in turn inspired by Miguel de Cervantes's seventeenth century masterpiece Don Quixote...
contained articles by the staff about how the production was created. The first theatre programmes were issued in the mid-nineteenth century in magazine format. The original theatre programme first appeared in the 18th century. The early playbills were basic, with only enough pages to list the cast members and information on the play's locale and scenes. There were usually only four pages: the cover advertised the show, a back page displayed the theatre layout, and the two interior pages listed all the credits. Not all early programmes were printed, but written by hand or cut and pasted together from the letters of other printed documents. The latter was especially done by theatre entrepreneur Sarah Baker, who owned several theatres in Kent, during the late 18th century.

In early British theatre the cast was very important. Audiences were very familiar with leading actors and a particular player could draw a larger crowd. The programme was a kind of contract between the theatre and the audience, because if an audience paid to see a particular actor and they were not presented, then there was the immediate risk of crowd hissing, orange throwing, or even rioting. This sometimes resulted in property damage and physical assault.

Programmes were not only distributed in theatres, but also on the streets. The distributors were often women who worked for the theatre by selling oranges as refreshments to audiences. It has been alluded to that these women were also prostitutes. However, there was still a large rate of illiteracy among theatre goers. This resulted in companies of actors traversing urban streets with a beating drum while announcing upcoming venues.

By the 19th century, the programmes, similar to today's, were being printed. However, the earlier playbills of the 18th century still contained more designs and information about a production. By 1884, advertisements became a standard appearance in playbills. Beginning in New York City
New York City
New York is the most populous city in the United States and the center of the New York Metropolitan Area, one of the most populous metropolitan areas in the world. New York exerts a significant impact upon global commerce, finance, media, art, fashion, research, technology, education, and...
, the first company to specialize in printing theatrical programmes was founded by an Ohio
Ohio
Ohio is a Midwestern state in the United States. The 34th largest state by area in the U.S.,it is the 7th‑most populous with over 11.5 million residents, containing several major American cities and seven metropolitan areas with populations of 500,000 or more.The state's capital is Columbus...
business man, Frank Vance Strauss
Frank Vance Strauss
Frank Vance Strauss was an Ohio business man who was the first to specialize in printing the theatre programme in New York City. He began by collecting ads for the Madison Square Theatre and transformed the programme from a four page leaflet into a magazine playbill that included advertisements...
. By 1911, the company was called the Strauss Magazine Theatre Program. On September 23, 1920, the company, then known as the New York Theatre Program Corporation, advertised its sales at a million and a half per month. This corporation was the early foundation for the modern day magazine, Playbill
Playbill
Playbill is a monthly U.S. magazine for theatregoers. Although there is a subscription issue available for home delivery, most Playbills are printed for particular shows to be distributed at the door...
.

During World War II
World War II
World War II, or the Second World War , was a global conflict lasting from 1939 to 1945, involving most of the world's nations—including all of the great powers—eventually forming two opposing military alliances: the Allies and the Axis...
, British theatre programmes underwent a dramatic change as the government placed restrictions over paper use. The programme turned back into a single sheet of paper folded over once to efficiently create four available pages for text. Not until the 1970s were photo printed programmes available and widely distributed at British theatres. The American Playbill did not suffer as severely during the second World War and was still published at a regular rate.

Theatre programmes have become very valuable articles of information for a city or nation's cultural history. A fine example was Australia's celebration in 2008 over the returning of its earliest surviving document from Canada, which was a theatre playbill from 1796. The playbill advertised the production of The Tragedy of Jane Shore. George Hughes, a convict aboard the First Fleet
First Fleet
The First Fleet is the name given to the eleven ships which sailed from Great Britain on 13 May 1787 with about 1,487 people, including 778 convicts , to establish the first European colony in Australia, in the region which Captain Cook had named New South Wales. The fleet was led by Captain ...
, printed the playbill from Australia’s first printing press.

At a professional
Professional sports
Professional sports, as opposed to amateur sports, are sports in which athletes receive payment for their performance. Professional athleticism has come to the fore through a combination of developments. Mass media and increased leisure have brought larger audiences, so that sports organizations...
sporting event, programmes are often sold and it contains information about the teams competing. In the United Kingdom football programmes are issued by the home team for every home match and as a hobby are collected by supporters and football enthuiasts. Sport
Sport
A Sport is all forms of physical activity which, through casual or organised participation, aim to use, maintain or improve physical fitness and provide entertainment to participants. Sport may be competitive, where a winner or winners can be identified by objective means, and may require a degree...
s programmes can be highly collectible, with some rare football
Football (soccer)
Association football, more commonly known as football or soccer, is a sport played between two teams of eleven players with a spherical ball...
programmes selling for high prices: in the UK
United Kingdom
The United Kingdom of Great Britain and Northern IrelandIn the United Kingdom and Dependencies, other languages have been officially recognised as legitimate autochthonous languages under the European Charter for Regional or Minority Languages...
, for thousands of pounds
Pound sterling
The pound sterling , commonly called the pound, is the official currency of the United Kingdom, its Crown Dependencies and the British Overseas Territories of South Georgia and the South Sandwich Islands, British Antarctic Territory and Tristan da Cunha. It is subdivided into 100 pence...
.

In the case of film
Film
A film, also called a movie or motion picture, is a series of still or moving images. It is produced by recording photographic images with cameras, or by creating images using animation techniques or visual effects...
s, programmes are rarely provided, although they were frequently given out during the original roadshow
RoadShow
RoadShow , formerly known as "資訊娛樂共同睇" [paraphrased as Integrated View of Information and Entertainment]) is the first "Multi-Media On Board" service on transit vehicles in the world. It was launched by Kowloon Motor Bus Company on 26 November 2000...
engagements of big-screen spectaculars such as Ben-Hur
Ben-Hur (1959 film)
Ben-Hur is a 1959 American epic film directed by William Wyler and starring Charlton Heston in the title role, the third film adaptation of Lew Wallace's 1880 novel Ben-Hur: A Tale of the Christ. The screenplay was written by Karl Tunberg, Gore Vidal, and Christopher Fry. The score was composed by...
(1959), King of Kings (1961), or How the West Was Won
How the West Was Won (film)
How the West Was Won is a 1962 American epic Western film. The picture was one of the last "old-fashioned" epic films made by Metro-Goldwyn-Mayer to enjoy great success. It follows four generations of a family as they move ever westward, from western New York state to the Pacific Ocean...
(1962). They served much the same function as those for live theater. Programmes for films made in special widescreen processes also explained how the widescreen effect was accomplished.