Halibut is a flatfish
Flatfish
The flatfish are an order of ray-finned fish, also called the Heterosomata, sometimes classified as a suborder of Perciformes. In many species, both eyes lie on one side of the head, one or the other migrating through and around the head during development...
, genus Hippoglossus
Hippoglossus
Hippoglossus is a genus of fish in the Pleuronectidae family.-Nomenclature:The word hippoglossus is derived from the Greek hippos, meaning "horse", and glossus, meaning "tongue" - a reference to the shape of the fish.-Species:...
, from the family of the right-eye flounder
Flounder
The flounder is an ocean-dwelling flatfish species that is found in coastal lagoons and estuaries of the Northern Atlantic and Pacific Oceans.-Taxonomy:There are a number of geographical and taxonomical species to which flounder belong.*Western Atlantic...
s (Pleuronectidae
Pleuronectidae
Righteye flounders are a family, Pleuronectidae, of flounders. They are called "righteye flounders" because most species lie on the sea bottom on their left side, with both eyes on the right side. The Paralichthyidae are the opposite, with their eyes on the left side.Their dorsal and anal fins are...
). Other flatfish are also called halibut. The name is derived from haly (holy) and butt (flat fish), for its popularity on Catholic holy days. Halibut live in both the North Pacific and the North Atlantic
Atlantic Ocean
The Atlantic Ocean is the second-largest of the world's oceanic divisions. With a total area of about , it covers approximately 20% of the Earth's surface and about 26% of its water surface area...
oceans and are highly-regarded food fish.

The halibut is the largest flat fish, averaging 11–13.5 kg (24.3–29.8 lb), but catch as large as 333 kilograms (734.1 lb) are reported; the largest recently recorded was 245 kilograms (540.1 lb) taken off the coast of Northern Norway
Norway
Norway , officially the Kingdom of Norway, is a Nordic unitary constitutional monarchy whose territory comprises the western portion of the Scandinavian Peninsula, Jan Mayen, and the Arctic archipelago of Svalbard and Bouvet Island. Norway has a total area of and a population of about 4.9 million...
and 2.5 metres (8.2 ft) long. They are gray-black on the top side with an off-white underbelly and have very small scales invisible to the naked eye embedded in their skin. At birth they have an eye on each side of the head, and swim like a salmon. After six months one eye migrates to the other side, making them look more like flounder. At the same time the stationary-eyed side darkens to match the top side, while the other side remains white. This color scheme disguises halibut from above (blending with the ocean floor) and from below (blending into the light from the sky) and is known as countershading
Countershading
Countershading, or Thayer's Law, is a form of camouflage. Countershading, in which an animal’s pigmentation is darker dorsally, is often thought to have an adaptive effect of reducing conspicuous shadows cast on the ventral region of an animal’s body...
. 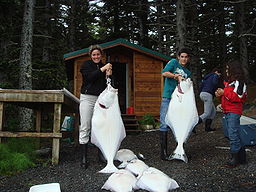 Halibut feed on almost any animal they can fit into their mouths. Juvenile halibut feed on small crustaceans and other bottom dwelling organisms. Animals found in their stomachs include sand lance
Sand lance
A sand lance or sandlance is a fish belonging to the family Ammodytidae. Several species of sand lance are commonly known as "sand eels" or "sandeels", though they are not related to true eels. Another variant name is launce, and all names of the fish are references to its slender body and...
, octopus, crab, salmon, hermit crab
Hermit crab
Hermit crabs are decapod crustaceans of the superfamily Paguroidea. Most of the 1100 species possess an asymmetrical abdomen which is concealed in an empty gastropod shell that is carried around by the hermit crab.-Description:...
s, lamprey
Lamprey
Lampreys are a family of jawless fish, whose adults are characterized by a toothed, funnel-like sucking mouth. Translated from an admixture of Latin and Greek, lamprey means stone lickers...
, sculpin
Sculpin
A Sculpin is a fish that belongs to the order Scorpaeniformes, suborder Cottoidei and superfamily Cottoidea, that contains 11 families, 149 genera, and 756 species...
, cod
Cod
Cod is the common name for genus Gadus, belonging to the family Gadidae, and is also used in the common name for various other fishes. Cod is a popular food with a mild flavor, low fat content and a dense, flaky white flesh. Cod livers are processed to make cod liver oil, an important source of...
, pollock
Pollock
Pollock is the common name used for either of the two species of marine fish in the Pollachius genus. Both P. pollachius and P. virens are commonly referred to as pollock. Other names for P...
, herring
Herring
Herring is an oily fish of the genus Clupea, found in the shallow, temperate waters of the North Pacific and the North Atlantic oceans, including the Baltic Sea. Three species of Clupea are recognized. The main taxa, the Atlantic herring and the Pacific herring may each be divided into subspecies...
, flounder
Flounder
The flounder is an ocean-dwelling flatfish species that is found in coastal lagoons and estuaries of the Northern Atlantic and Pacific Oceans.-Taxonomy:There are a number of geographical and taxonomical species to which flounder belong.*Western Atlantic...
as well as other halibut. Halibut live at depths ranging from a few meters to hundreds of meters, and although they spend most of their time near the bottom, halibut may move up in the water column to feed. In most ecosystems the halibut is near the top of the marine food chain
Food chain
A food web depicts feeding connections in an ecological community. Ecologists can broadly lump all life forms into one of two categories called trophic levels: 1) the autotrophs, and 2) the heterotrophs...
. In the North Pacific their common predators are the sea lion
Sea Lion
Sea lions are pinnipeds characterized by external ear-flaps, long fore-flippers, the ability to walk on all fours, and short thick hair. Together with the fur seal, they comprise the family Otariidae, or eared seals. There are six extant and one extinct species in five genera...
(Eumetopias jubatus), the orca
Orca
The killer whale , commonly referred to as the orca, and less commonly as the blackfish, is a toothed whale belonging to the oceanic dolphin family. Killer whales are found in all oceans, from the frigid Arctic and Antarctic regions to tropical seas...
(Orcinus orca), and the salmon shark
Salmon shark
The salmon shark, Lamna ditropis, is a species of shark occurring in the north Pacific ocean. As an apex predator, the salmon shark feeds on salmon, and also on squid, sablefish, and herring...
(Lamna ditropis).

The North Pacific commercial halibut fishery dates to the late 19th century and today is one of the region's largest and most lucrative. In Canadian and U.S. waters, longline
Long-line fishing
Longline fishing is a commercial fishing technique. It uses a long line, called the main line, with baited hooks attached at intervals by means of branch lines called "snoods". A snood is a short length of line, attached to the main line using a clip or swivel, with the hook at the other end....
predominates, using chunks of octopus ("devilfish") or other bait on circle hooks attached at regular intervals to a weighted line that can extend for several miles across the bottom. The fishing vessel retrieves the line after several hours to a day. The effects of longline gear on habitats are poorly understood but could include disturbance of sediments, benthic structures, and other structures.

For most of the modern era, halibut fishery operated as a derby. Regulators declared time slots when fishing was open (typically 24–48 hours at a time) and fisherman raced to catch as many pounds as they could within that interval. This approach accommodated unlimited participation in the fishery while allowing regulators to control the quantity of fish caught annually by controlling the number and timing of openings. The approach led to unsafe fishing as openings were necessarily set before the weather was known, forcing fisherman to leave port regardless of the weather. The approach limited fresh halibut to the markets to several weeks per year, when the gluts would push down the price received by fishermen.

In 1995, U.S. regulators allocated individual fishing quota
Individual fishing quota
Individual fishing quotas also known as "individual transferable quotas" are one kind of catch share, a means by which many governments regulate fishing. The regulator sets a species-specific total allowable catch , typically by weight and for a given time period. A dedicated portion of the TAC,...
s (IFQs) to existing fishery participants based on each vessel's documented historical catch. IFQs grant holders a specific proportion of each year's total allowable catch (TAC). The fishing season is nine months. The IFQ system improved both safety and product quality by providing a stable flow of fresh halibut to the marketplace. Critics of the program suggest that, since holders can sell their quota and the fish are a public resource, the IFQ system gave a public resource to the private sector. The fisheries were managed through a treaty between The United States and Canada per recommendations of the International Pacific Halibut Commission that was formed in 1923.

There is also a significant sport fishery in Alaska and British Columbia where halibut are a prized game and food fish. Sport fisherman use large rods and reels with 80–150 lb (36.3–68 kg) line, and often bait with herring
Herring
Herring is an oily fish of the genus Clupea, found in the shallow, temperate waters of the North Pacific and the North Atlantic oceans, including the Baltic Sea. Three species of Clupea are recognized. The main taxa, the Atlantic herring and the Pacific herring may each be divided into subspecies...
, large jigs, or whole salmon heads. Halibut are strong and fight strenuously when exposed to air. Smaller fish will usually be pulled on board with a gaff and may be clubbed or even punched in the head in order to prevent them from thrashing around on the deck. In both commercial and sport fisheries standard procedure is to shoot or otherwise subdue very large halibut over 150–200 lb (68–90.7 kg) before landing them. Alaska's sport fishery is an element of the state's tourism economy.

Halibut are often broiled, deep-fried or grilled while fresh. Smoking is more difficult with halibut meat than it is with salmon, due to its ultra-low fat content. Eaten fresh, the meat has a clean taste and requires little seasoning. Halibut is noted for its dense and firm texture.

Halibut have historically been an important food source to Native Americans
Native Americans in the United States
Native Americans in the United States are the indigenous peoples in North America within the boundaries of the present-day continental United States, parts of Alaska, and the island state of Hawaii. They are composed of numerous, distinct tribes, states, and ethnic groups, many of which survive as...
and Canadian First Nations
First Nations
First Nations is a term that collectively refers to various Aboriginal peoples in Canada who are neither Inuit nor Métis. There are currently over 630 recognised First Nations governments or bands spread across Canada, roughly half of which are in the provinces of Ontario and British Columbia. The...
and continue to be a key element to many coastal subsistence economies. Accommodating the competing interests of commercial, sport, and subsistence users is a challenge.

The Atlantic population is so depleted through overfishing that it may be declared an endangered species
Endangered species
An endangered species is a population of organisms which is at risk of becoming extinct because it is either few in numbers, or threatened by changing environmental or predation parameters...
. According to Seafood Watch
Seafood Watch
Seafood Watch is one of the best known sustainable seafood advisory lists, and has influenced similar programs around the world. It is a program designed to raise consumer awareness about the importance of buying seafood from sustainable sources...
, consumers should avoid Atlantic halibut. Most halibut eaten on the East coast of the United States are from the Pacific.