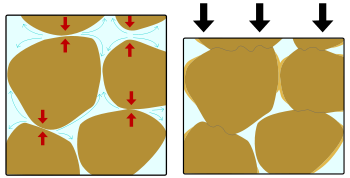 In structural geology
Structural geology
Structural geology is the study of the three-dimensional distribution of rock units with respect to their deformational histories. The primary goal of structural geology is to use measurements of present-day rock geometries to uncover information about the history of deformation in the rocks, and...
and diagenesis
Diagenesis
In geology and oceanography, diagenesis is any chemical, physical, or biological change undergone by a sediment after its initial deposition and during and after its lithification, exclusive of surface alteration and metamorphism. These changes happen at relatively low temperatures and pressures...
, pressure solution or pressure dissolution is a deformation mechanism
Deformation mechanism
In structural geology, metallurgy and materials science, deformation mechanisms refer to the various mechanisms at the grain scale that are responsible for accommodating large plastic strains in rocks, metals and other materials.-Mechanisms:...
that involves the dissolution
Solvation
Solvation, also sometimes called dissolution, is the process of attraction and association of molecules of a solvent with molecules or ions of a solute...
of minerals at grain-to-grain contacts into an aqueous
Aqueous solution
An aqueous solution is a solution in which the solvent is water. It is usually shown in chemical equations by appending aq to the relevant formula, such as NaCl. The word aqueous means pertaining to, related to, similar to, or dissolved in water...
pore
Porosity
Porosity or void fraction is a measure of the void spaces in a material, and is a fraction of the volume of voids over the total volume, between 0–1, or as a percentage between 0–100%...
fluid in areas of relatively high stress
Stress (physics)
In continuum mechanics, stress is a measure of the internal forces acting within a deformable body. Quantitatively, it is a measure of the average force per unit area of a surface within the body on which internal forces act. These internal forces are a reaction to external forces applied on the body...
and either deposition in regions of relatively low stress within the same rock or their complete removal from the rock within the fluid. It is an example of diffusive mass transfer.

The detailed kinetics of the process was reviewed by Rutter, and since then such kinetics has been used in
many applications in earth sciences.

Evidence for pressure solution has been described from sedimentary rocks that have only been affected by compaction
Compaction (geology)
Compaction refers to the process by which a sediment progressively loses its porosity due to the effects of loading. This forms part of the process of lithification. When a layer of sediment is originally deposited, it contains an open framework of particles with the pore space being usually...
. The most common example of this is bedding plane
Bed (geology)
In geology a bed is the smallest division of a geologic formation or stratigraphic rock series marked by well-defined divisional planes separating it from layers above and below. A bed is the smallest lithostratigraphic unit, usually ranging in thickness from a centimeter to several meters and...
parallel stylolite
Stylolite
Stylolites are serrated surfaces at which mineral material has been removed by pressure dissolution, in a process that decreases the total volume of rock. Insoluble minerals like clays, pyrite, oxides remain within the stylolites and make them visible...
s developed in carbonates
Carbonate rock
Carbonate rocks are a class of sedimentary rocks composed primarily of carbonate minerals. The two major types are limestone, which is composed of calcite or aragonite and dolostone, which is composed of the mineral dolomite .Calcite can be either dissolved by groundwater or precipitated by...
.

Tectonically deformed rocks also show evidence of pressure solution including stylolites at a high angle to bedding. The process is also thought to be an important part of the development of cleavage
Cleavage (geology)
This article is about rock cleavage, for cleavage in minerals see Cleavage Cleavage, in structural geology and petrology, describes a type of planar rock feature that develops as a result of deformation and metamorphism. The degree of deformation and metamorphism along with rock type determines the...
.

A theoretical model was formulated by Rutter, and a recent mathematical analysis was carried out, leading
to the so-called Fowler–Yang equations, which can explain the transition behaviour of pressure solution.
The source of this article is wikipedia, the free encyclopedia.  The text of this article is licensed under the GFDL.