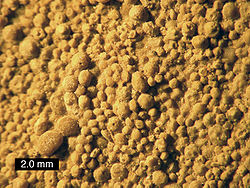 Carbonate rocks are a class of sedimentary rock
Sedimentary rock
Sedimentary rock are types of rock that are formed by the deposition of material at the Earth's surface and within bodies of water. Sedimentation is the collective name for processes that cause mineral and/or organic particles to settle and accumulate or minerals to precipitate from a solution....
s composed primarily of carbonate
Carbonate
In chemistry, a carbonate is a salt of carbonic acid, characterized by the presence of the carbonate ion, . The name may also mean an ester of carbonic acid, an organic compound containing the carbonate group C2....
mineral
Mineral
A mineral is a naturally occurring solid chemical substance formed through biogeochemical processes, having characteristic chemical composition, highly ordered atomic structure, and specific physical properties. By comparison, a rock is an aggregate of minerals and/or mineraloids and does not...
s. The two major types are limestone
Limestone
Limestone is a sedimentary rock composed largely of the minerals calcite and aragonite, which are different crystal forms of calcium carbonate . Many limestones are composed from skeletal fragments of marine organisms such as coral or foraminifera....
, which is composed of calcite
Calcite
Calcite is a carbonate mineral and the most stable polymorph of calcium carbonate . The other polymorphs are the minerals aragonite and vaterite. Aragonite will change to calcite at 380-470°C, and vaterite is even less stable.-Properties:...
or aragonite
Aragonite
Aragonite is a carbonate mineral, one of the two common, naturally occurring, crystal forms of calcium carbonate, CaCO3...
(different crystal forms of CaCO3) and dolostone
Dolostone
Dolostone or dolomite rock is a sedimentary carbonate rock that contains a high percentage of the mineral dolomite. In old U.S.G.S. publications it was referred to as magnesian limestone. Most dolostone formed as a magnesium replacement of limestone or lime mud prior to lithification. It is...
, which is composed of the mineral dolomite
Dolomite
Dolomite is a carbonate mineral composed of calcium magnesium carbonate CaMg2. The term is also used to describe the sedimentary carbonate rock dolostone....
(CaMg(CO3)2).

Calcite can be either dissolved
Solvation
Solvation, also sometimes called dissolution, is the process of attraction and association of molecules of a solvent with molecules or ions of a solute...
by groundwater
Groundwater
Groundwater is water located beneath the ground surface in soil pore spaces and in the fractures of rock formations. A unit of rock or an unconsolidated deposit is called an aquifer when it can yield a usable quantity of water. The depth at which soil pore spaces or fractures and voids in rock...
or precipitated by groundwater, depending on several factors including the water temperature, pH, and dissolved ion
Ion
An ion is an atom or molecule in which the total number of electrons is not equal to the total number of protons, giving it a net positive or negative electrical charge. The name was given by physicist Michael Faraday for the substances that allow a current to pass between electrodes in a...
concentrations. Calcite exhibits an unusual characteristic called retrograde solubility in which it becomes less soluble in water as the temperature increases.

When conditions are right for precipitation, calcite forms mineral coatings that cement the existing rock grains together or it can fill fractures.

Karst
KARST
Kilometer-square Area Radio Synthesis Telescope is a Chinese telescope project to which FAST is a forerunner. KARST is a set of large spherical reflectors on karst landforms, which are bowlshaped limestone sinkholes named after the Kras region in Slovenia and Northern Italy. It will consist of...
topography
Topography
Topography is the study of Earth's surface shape and features or those ofplanets, moons, and asteroids...
and cave
Cave
A cave or cavern is a natural underground space large enough for a human to enter. The term applies to natural cavities some part of which is in total darkness. The word cave also includes smaller spaces like rock shelters, sea caves, and grottos.Speleology is the science of exploration and study...
s develop in carbonate rocks due to their solubility
Solubility
Solubility is the property of a solid, liquid, or gaseous chemical substance called solute to dissolve in a solid, liquid, or gaseous solvent to form a homogeneous solution of the solute in the solvent. The solubility of a substance fundamentally depends on the used solvent as well as on...
in dilute acid
Acid
An acid is a substance which reacts with a base. Commonly, acids can be identified as tasting sour, reacting with metals such as calcium, and bases like sodium carbonate. Aqueous acids have a pH of less than 7, where an acid of lower pH is typically stronger, and turn blue litmus paper red...
ic groundwater
Groundwater
Groundwater is water located beneath the ground surface in soil pore spaces and in the fractures of rock formations. A unit of rock or an unconsolidated deposit is called an aquifer when it can yield a usable quantity of water. The depth at which soil pore spaces or fractures and voids in rock...
. Cooling groundwater or mixing of different groundwaters will also create conditions suitable for cave formation.

Marble
Marble
Marble is a metamorphic rock composed of recrystallized carbonate minerals, most commonly calcite or dolomite.Geologists use the term "marble" to refer to metamorphosed limestone; however stonemasons use the term more broadly to encompass unmetamorphosed limestone.Marble is commonly used for...
is the metamorphic
Metamorphic rock
Metamorphic rock is the transformation of an existing rock type, the protolith, in a process called metamorphism, which means "change in form". The protolith is subjected to heat and pressure causing profound physical and/or chemical change...
carbonate rock. Rare igneous carbonate rocks exist as intrusive carbonatite
Carbonatite
Carbonatites are intrusive or extrusive igneous rocks defined by mineralogic composition consisting of greater than 50 percent carbonate minerals. Carbonatites may be confused with marble, and may require geochemical verification....
s and even rarer volcanic carbonate lava
Lava
Lava refers both to molten rock expelled by a volcano during an eruption and the resulting rock after solidification and cooling. This molten rock is formed in the interior of some planets, including Earth, and some of their satellites. When first erupted from a volcanic vent, lava is a liquid at...
.
The source of this article is wikipedia, the free encyclopedia.  The text of this article is licensed under the GFDL.