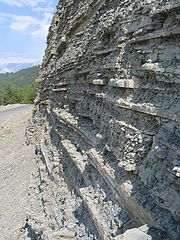 In geology
Geology
Geology is the science comprising the study of solid Earth, the rocks of which it is composed, and the processes by which it evolves. Geology gives insight into the history of the Earth, as it provides the primary evidence for plate tectonics, the evolutionary history of life, and past climates...
a bed is the smallest division of a geologic formation
Geologic formation
A formation or geological formation is the fundamental unit of lithostratigraphy. A formation consists of a certain number of rock strata that have a comparable lithology, facies or other similar properties...
or stratigraphic
Stratigraphy
Stratigraphy, a branch of geology, studies rock layers and layering . It is primarily used in the study of sedimentary and layered volcanic rocks....
rock series marked by well-defined divisional planes (bedding planes) separating it from layers above and below. A bed is the smallest lithostratigraphic
Lithostratigraphy
Lithostratigraphy is a sub-discipline of stratigraphy, the geological science associated with the study of strata or rock layers. Major focuses include geochronology, comparative geology, and petrology...
unit, usually ranging in thickness from a centimeter to several meters and distinguishable from beds above and below it. Beds can be differentiated in various ways, including rock or mineral
Mineral
A mineral is a naturally occurring solid chemical substance formed through biogeochemical processes, having characteristic chemical composition, highly ordered atomic structure, and specific physical properties. By comparison, a rock is an aggregate of minerals and/or mineraloids and does not...
type and particle size. The term is generally applied to sedimentary strata
Stratum
In geology and related fields, a stratum is a layer of sedimentary rock or soil with internally consistent characteristics that distinguish it from other layers...
, but may also be used for volcanic flows or ash
Volcanic ash
Volcanic ash consists of small tephra, which are bits of pulverized rock and glass created by volcanic eruptions, less than in diameter. There are three mechanisms of volcanic ash formation: gas release under decompression causing magmatic eruptions; thermal contraction from chilling on contact...
layers.

In a quarry
Quarry
A quarry is a type of open-pit mine from which rock or minerals are extracted. Quarries are generally used for extracting building materials, such as dimension stone, construction aggregate, riprap, sand, and gravel. They are often collocated with concrete and asphalt plants due to the requirement...
, a bedding is a term used for a structure occurring in granite and similar massive rocks that allows them to split in well-defined planes horizontally or parallel to the land surface.