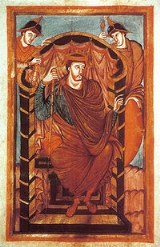 Overview
Lothair I or Lothar I (795 – 29 September 855) was the Emperor of the Romans
Carolingian Empire
Carolingian Empire is a historiographical term which has been used to refer to the realm of the Franks under the Carolingian dynasty in the Early Middle Ages. This dynasty is seen as the founders of France and Germany, and its beginning date is based on the crowning of Charlemagne, or Charles the...
(817–55), co-ruling with his father until 840, and the King of Bavaria
King of Bavaria
King of Bavaria was a title held by the hereditary Wittelsbach rulers of Bavaria in the state known as the Kingdom of Bavaria from 1805 until 1918, when the kingdom was abolished...
(815–17), Italy
King of Italy
King of Italy is a title adopted by many rulers of the Italian peninsula after the fall of the Roman Empire...
(818–55) and Middle Francia
Middle Francia
Middle Francia was an ephemeral Frankish kingdom created by the Treaty of Verdun in 843, which divided the Carolingian Empire among the sons of Louis the Pious...
(840–55). The territory of Lothringen (Lorraine in French and English) is named after him.

Lothair was the eldest son of the Carolingian emperor Louis the Pious
Louis the Pious
Louis the Pious , also called the Fair, and the Debonaire, was the King of Aquitaine from 781. He was also King of the Franks and co-Emperor with his father, Charlemagne, from 813...
and his wife Ermengarde of Hesbaye
Ermengarde of Hesbaye
Ermengarde of Hesbaye was Queen of the Franks and Holy Roman Empress as the wife of Emperor Louis I. She was Frankish, the daughter of Ingeram, count of Hesbaye, and Hedwig of Bavaria...
, daughter of Ingerman
Ingerman of Hesbaye
Ingerman, or Ingram was a Frank and count of Hesbaye. His family is known as Robertians. His family line is not entirely sure, but he was probably the son of a Frank named Rodbert. Robert of Hesbaye and Cancor, founder of the Lorsch Abbey were probably his brothers...
the duke of Hesbaye
Hesbaye
Hesbaye or Haspengouw , is a region spanning the south of the Belgian province of Limburg, the east of the Belgian provinces of Flemish Brabant and Walloon Brabant, and the northwestern part of the province of Liège.The Limburgish portion contains the cities of Tongeren, Sint-Truiden, Bilzen and...
.