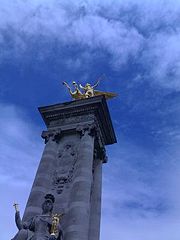 The Pont Alexandre III is an arch bridge
Arch bridge
An arch bridge is a bridge with abutments at each end shaped as a curved arch. Arch bridges work by transferring the weight of the bridge and its loads partially into a horizontal thrust restrained by the abutments at either side...
that spans the Seine
Seine
The Seine is a -long river and an important commercial waterway within the Paris Basin in the north of France. It rises at Saint-Seine near Dijon in northeastern France in the Langres plateau, flowing through Paris and into the English Channel at Le Havre . It is navigable by ocean-going vessels...
, connecting the Champs-Élysées
Champs-Élysées
The Avenue des Champs-Élysées is a prestigious avenue in Paris, France. With its cinemas, cafés, luxury specialty shops and clipped horse-chestnut trees, the Avenue des Champs-Élysées is one of the most famous streets and one of the most expensive strip of real estate in the world. The name is...
quarter and the Invalides
Les Invalides
Les Invalides , officially known as L'Hôtel national des Invalides , is a complex of buildings in the 7th arrondissement of Paris, France, containing museums and monuments, all relating to the military history of France, as well as a hospital and a retirement home for war veterans, the building's...
and Eiffel Tower
Eiffel Tower
The Eiffel Tower is a puddle iron lattice tower located on the Champ de Mars in Paris. Built in 1889, it has become both a global icon of France and one of the most recognizable structures in the world...
quarter, widely regarded as the most ornate, extravagant bridge in Paris
Paris
Paris is the capital and largest city in France, situated on the river Seine, in northern France, at the heart of the Île-de-France region...
. It is classified as a historical monument.

The bridge, with its exuberant Art Nouveau
Art Nouveau
Art Nouveau is an international philosophy and style of art, architecture and applied art—especially the decorative arts—that were most popular during 1890–1910. The name "Art Nouveau" is French for "new art"...
lamps, cherub
Cherub
A cherub is a type of spiritual being mentioned in the Hebrew Bible and cited later on in the Christian biblical canons, usually associated with the presence of God...
s, nymph
Nymph
A nymph in Greek mythology is a female minor nature deity typically associated with a particular location or landform. Different from gods, nymphs are generally regarded as divine spirits who animate nature, and are usually depicted as beautiful, young nubile maidens who love to dance and sing;...
s and winged horses at either end, was built between 1896 and 1900. It is named after Tsar Alexander III
Alexander III of Russia
Alexander Alexandrovich Romanov , historically remembered as Alexander III or Alexander the Peacemaker reigned as Emperor of Russia from until his death on .-Disposition:...
, who had concluded the Franco-Russian Alliance
Franco-Russian Alliance
The Franco-Russian Alliance was a military alliance between the French Third Republic and the Russian Empire that ran from 1892 to 1917. The alliance ended the diplomatic isolation of France and undermined the supremacy of the German Empire in Europe...
in 1892. His son Nicholas II
Nicholas II of Russia
Nicholas II was the last Emperor of Russia, Grand Prince of Finland, and titular King of Poland. His official short title was Nicholas II, Emperor and Autocrat of All the Russias and he is known as Saint Nicholas the Passion-Bearer by the Russian Orthodox Church.Nicholas II ruled from 1894 until...
laid the foundation stone in October 1896. The style of the bridge reflects that of the Grand Palais
Grand Palais
This article contains material abridged and translated from the French and Spanish Wikipedia.The Grand Palais des Champs-Elysées, commonly known as the Grand Palais , is a large historic site, exhibition hall and museum complex located at the Champs-Élysées in the 8th arrondissement of Paris, France...
, to which it leads on the right bank.

The construction of the bridge is a marvel of 19th century engineering, consisting of a six-metre high single span steel arch. The design, by the architects Joseph Cassien-Bernard and Gaston Cousin, was subject to strict controls that prevented the bridge from obscuring the view of the Champs-Élysées
Champs-Élysées
The Avenue des Champs-Élysées is a prestigious avenue in Paris, France. With its cinemas, cafés, luxury specialty shops and clipped horse-chestnut trees, the Avenue des Champs-Élysées is one of the most famous streets and one of the most expensive strip of real estate in the world. The name is...
or the Invalides
Les Invalides
Les Invalides , officially known as L'Hôtel national des Invalides , is a complex of buildings in the 7th arrondissement of Paris, France, containing museums and monuments, all relating to the military history of France, as well as a hospital and a retirement home for war veterans, the building's...
.

The bridge was built by the engineers Jean Résal and Amédée d'Alby and inaugurated in 1900 for the Universal Exhibition
Exposition Universelle (1900)
The Exposition Universelle of 1900 was a world's fair held in Paris, France, from April 15 to November 12, 1900, to celebrate the achievements of the past century and to accelerate development into the next...
(as were the nearby Grand Palais
Grand Palais
This article contains material abridged and translated from the French and Spanish Wikipedia.The Grand Palais des Champs-Elysées, commonly known as the Grand Palais , is a large historic site, exhibition hall and museum complex located at the Champs-Élysées in the 8th arrondissement of Paris, France...
and Petit Palais
Petit Palais
The Petit Palais is a museum in Paris, France. Built for the Universal Exhibition in 1900 to Charles Girault's designs, it now houses the City of Paris Museum of Fine Arts ....
).

Numerous sculptors provided the sculpture that features prominently in the bridge. Four gilt-bronze statues of Fames watch over the bridge, supported on massive 17-meter socles
Socle (architecture)
In architecture, a socle is a short plinth used to support a pedestal, sculpture or column. In the field of archaeology, this term is used to refer to a wall base, frequently of stone, that supports the upper part of the wall, which is made of a different material, frequently mud brick...
, that provide stabilizing counterweight for the arch, without interfering with monumental views. The socles are crowned by Fames restraining Pegasus : on the Right Bank, Renommée des Sciences ("Fame of the Sciences") and the Renommée des Arts ("Fame of the Arts") both by Emmanuel Frémiet
Emmanuel Frémiet
Emmanuel Frémiet was a French sculptor. He is famous for his sculpture of Joan of Arc in Paris and the monument to Ferdinand de Lesseps in Suez....
; at their bases, La France Contemporaine ("Contemporary France") by Gustave Michel
Gustave Michel
Gustave Frederic Michel was a French sculptor, according to Marina Warner "one of the most famous sculptors of the first decades of this century in France," although virtually unknown today.Work includes:...
and France de Charlemagne ("France of Charlemagne") by Alfred Lenoir. The lions groups are by Georges Gardet
Georges Gardet
Georges Gardet was a French sculptor and animalier.The son of a sculptor, Gardet attended the Ecole des Beaux-Arts in the atelier of Aimé Millet and Emmanuel Fremiet...
.

On the Left Bank, the Renommée du Commerce ("Fame of Commerce") by Pierre Granet and the Renommée de l'Industrie ("Fame of Industry") by Clément Steiner; at their bases France de la Renaissance ("France of the Renaissance") by Jules Coutan and La France de Louis XIV ("France of Louis XIV") by Laurent Marqueste
Laurent Marqueste
Laurent-Honoré Marqueste was a French sculptor in the neo-Baroque Beaux-Arts tradition. He was a pupil of François Jouffroy and of Alexandre Falguière and won the Prix de Rome in 1871. On his return he made his official debut at the Paris salon of 1874 . In 1893 he became a professor at the École...
. The lions groups are by Jules Dalou
Jules Dalou
Aimé-Jules Dalou was a French sculptor, recognized as one of the most brilliant virtuosos of nineteenth-century France, admired for his perceptiveness, execution, and unpretentious realism.-Life:...
.

At the centres of the arches, Nymphs of the Seine with the arms of France correspond with Nymphs of the Neva with the arms of Imperial Russia on the other face; both are executed in hammered copper over forms by Georges Récipon
Georges Récipon
Georges Récipon was a French painter and sculptor.The son of a sculptor, Récipon's major work is probably his work at the Grand Palais in Paris, two monumental and exuberant quadrigas on the building's roof.Other work includes:...
. (In the same political spirit, the Trinity Bridge in Saint Petersburg
Saint Petersburg
Saint Petersburg is a city and a federal subject of Russia located on the Neva River at the head of the Gulf of Finland on the Baltic Sea...
was conceived as a memorial to the Franco-Russian Alliance. It was designed by Gustave Eiffel
Gustave Eiffel
Alexandre Gustave Eiffel was a French structural engineer from the École Centrale Paris, an architect, an entrepreneur and a specialist of metallic structures...
, and the first stone laid in August 1897 by French president Félix Faure
Félix Faure
Félix François Faure was President of France from 1895 until his death.-Biography:Félix François Faure was born in Paris, the son of a small furniture maker...
.)