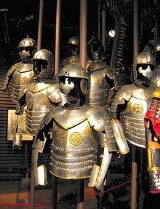 The Polish Army Museum was not too long ago given the equipment of the lost soldiers from the Presidential Smolensk aircraft crash. The equipment includes the ID Passes, Portable radios, torches, holsters and much more and all in their original state.

Museum of the Polish Army is a museum in Warsaw
Warsaw
Warsaw is the capital and largest city of Poland. It is located on the Vistula River, roughly from the Baltic Sea and from the Carpathian Mountains. Its population in 2010 was estimated at 1,716,855 residents with a greater metropolitan area of 2,631,902 residents, making Warsaw the 10th most...
documenting the military aspects of the history of Poland
History of Poland
The History of Poland is rooted in the arrival of the Slavs, who gave rise to permanent settlement and historic development on Polish lands. During the Piast dynasty Christianity was adopted in 966 and medieval monarchy established...
. Created in 1920, it occupies a wing of the building of the Polish National Museum as well as several branches in Poland. It's Warsaw's second largest museum and the largest collection of military objects in Poland. The collection illustrates a thousand years of Polish military history - from the 10th century to the Second World War.

Opened in 1920, the museum expanded in 1993 with the Museum of Katyn and the Museum of Polish Military Technology
Museum of Polish Military Technology
Muzeum Polskiej Techniki Wojskowej was a military museum in Warsaw, Poland, a branch of Polish Army Museum. It was located in former Fort IX of Warsaw Fortress. The inside exhibitions of the museum closed in 2009 because the building it was occupying was judged as unfit to receive visitors...
opened in the 9th Czerniakowski Fort. 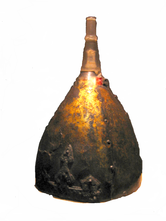 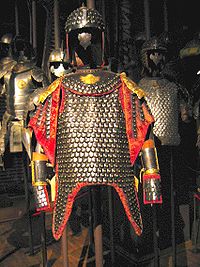 The forecourt of the museum houses several dozen armoured vehicles, artillery pieces and aircraft, being an eclectic mix of Soviet, western and Polish equipment, mostly from the World War II era.

The indoor galleries concentrate on the military history of Poland since the 10th century, and are particularly strong on Poland's era of military greatness in the 17th century, through the decline into anarchy in the 18th century. Several rooms are devoted to Poland's part in the Napoleonic Wars
Napoleonic Wars
The Napoleonic Wars were a series of wars declared against Napoleon's French Empire by opposing coalitions that ran from 1803 to 1815. As a continuation of the wars sparked by the French Revolution of 1789, they revolutionised European armies and played out on an unprecedented scale, mainly due to...
, and the national uprisings of 1830-31 and 1863. By far the largest part of exhibition space is devoted to the 20th century, especially World War II. Highlights of the Museum's collection include an extremely rare gilded helmet from the 10th century, which is said to have belonged to a Polish chieftain
Chieftain
Chieftain may refer to:The leader or head of a group:* a tribal chief or a village head.* a member of the 'House of chiefs'.* a captain, to which 'chieftain' is etymologically related.* Clan chief, the head of a Scottish clan....
and the collection of hussars' armour.

Additionally there is a permanent exhibition of oriental arms and armour from the museum's own extensive collection, which includes many world-class items from Ottoman Turkey, the Crimean Tatar Khanate, Mongolia and Japan. The heavy weaponry is on display in the adjacent park and at the Fort Czerniakowski (Muzeum Polskiej Techniki Wojskowej, closed at present as its building is repaired). The park surrounding the Museum is home to an open-air exhibition of heavy military equipment (tanks, artillery, aircraft and mine detection and diffusion). The Fort houses also the Museum of Katyń Victims, subsidiary of the Museum of the Polish Army.

The museum is run as a department of the Polish armed forces, an arrangement which brings advantages - such as limitless access to military surplus stock - but also disadvantages (not least the lack of a proper giftshop/bookshop, since by law Polish military facilities cannot sell goods to the public on a commercial basis).

On December 15, 2008, the Museum of the Polish Army announced that it will sponsor an international competition to choose an architectural design for its new premises and surrounding area. The building will be built in the historic Citadel
Warsaw Citadel
Cytadela is a 19th-century fortress in Warsaw, Poland. It was built by order of Tsar Nicholas I after the suppression of the 1830 November Uprising in order to bolster imperial Russian control of the city. It served as a prison into the late 1930s.- History :The Citadel was built by personal...
located in Warsaw's Żoliborz
Zoliborz
Żoliborz is one of the northern districts of the city of Warsaw. It is located directly to the north of the City Centre, on the left bank of the Vistula river. It has approximately 50,000 inhabitants and is one of the smallest boroughs of Warsaw....
district. The new museum is expected to be a modern multimedia institution similar in concept to the highly successful Warsaw Uprising Museum. The winner is expected to be selected in August 2009, construction of the museum will begin in 2009 or 2010 and should be completed by 2013. Once the new Polish Army Museum is built, its current building in the city center will be taken over by the National Museum in Warsaw.