Giecz was once one of the main centres of Polish statehood in the early Middle Ages
Middle Ages
The Middle Ages is a periodization of European history from the 5th century to the 15th century. The Middle Ages follows the fall of the Western Roman Empire in 476 and precedes the Early Modern Era. It is the middle period of a three-period division of Western history: Classic, Medieval and Modern...
, alongside Poznań
Poznan
Poznań is a city on the Warta river in west-central Poland, with a population of 556,022 in June 2009. It is among the oldest cities in Poland, and was one of the most important centres in the early Polish state, whose first rulers were buried at Poznań's cathedral. It is sometimes claimed to be...
and Gniezno
Gniezno
Gniezno is a city in central-western Poland, some 50 km east of Poznań, inhabited by about 70,000 people. One of the Piasts' chief cities, it was mentioned by 10th century A.D. sources as the capital of Piast Poland however the first capital of Piast realm was most likely Giecz built around...
. In the early 9th century a small keep was built on a mound on a peninsula on the Giecz lake; fortified with a stockade and earthworks. Since 940
940
Year 940 was a leap year starting on Wednesday of the Julian calendar.- Asia :* Saadia Gaon compiles his siddur in Iraq.* Narita-san Temple is founded in Chiba, Japan....
it was one of the key strongholds of the early Piast dynasty
Piast dynasty
The Piast dynasty was the first historical ruling dynasty of Poland. It began with the semi-legendary Piast Kołodziej . The first historical ruler was Duke Mieszko I . The Piasts' royal rule in Poland ended in 1370 with the death of king Casimir the Great...
. In 1038 during a war with Bohemia
Bohemia
Bohemia is a historical region in central Europe, occupying the western two-thirds of the traditional Czech Lands. It is located in the contemporary Czech Republic with its capital in Prague...
, the place was seized by Bretislaus I
Bretislaus I of Bohemia
Bretislaus I , known as Bohemian Achilles, of the house of the Přemyslids, was the duke of Bohemia from 1035 till death.-Youth:...
, who sacked the nearby settlement and sold its inhabitants into slavery. The place quickly recovered and by the 13th century was a centre of administration, trade and commerce in the Greater Poland
Greater Poland
Greater Poland or Great Poland, often known by its Polish name Wielkopolska is a historical region of west-central Poland. Its chief city is Poznań.The boundaries of Greater Poland have varied somewhat throughout history...
region. At about that time the settlement received a town charter and became the seat of a castellan
Castellan
A castellan was the governor or captain of a castle. The word stems from the Latin Castellanus, derived from castellum "castle". Also known as a constable.-Duties:...
y. However, in 1331 it was burnt to the ground, never to recover. 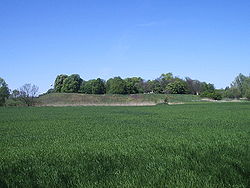 After 1945 archaeologists discovered the remnants of a mediaeval pallatium
Palace
A palace is a grand residence, especially a royal residence or the home of a head of state or some other high-ranking dignitary, such as a bishop or archbishop. The word itself is derived from the Latin name Palātium, for Palatine Hill, one of the seven hills in Rome. In many parts of Europe, the...
, a pre-Romanesque rotunda
Rotunda (architecture)
A rotunda is any building with a circular ground plan, sometimes covered by a dome. It can also refer to a round room within a building . The Pantheon in Rome is a famous rotunda. A Band Rotunda is a circular bandstand, usually with a dome...
, stone walls, a 13th-century palace and several sites of primitive iron-ore working.

Currently, Giecz is the site of ongoing excavations. There are two habitation phases being excavated at the same location. The first is a cemetery dated to the 10-11th century. The second, located just beneath the cemetery, is an earlier settlement. Features of this settlement include open earthen structures, hearths, storage pits, and rich culture layers. Funding for these excavations is provided by the Slavia Foundation and the First Piasts Museum, Lednica.
The source of this article is wikipedia, the free encyclopedia.  The text of this article is licensed under the GFDL.