Encyclopedia
Poison sumac is a woody shrub
Shrub
A shrub or bush is distinguished from a tree by its multiple stems and shorter height, usually under 5–6 m tall. A large number of plants may become either shrubs or trees, depending on the growing conditions they experience...
or small tree growing to 7 m (20 ft) tall. All parts of the plant contain a resin called urushiol
Urushiol
Urushiol is an oily organic allergen found in plants of the family Anacardiaceae, especially Toxicodendron spp. . It causes an allergic skin rash on contact, known as urushiol-induced contact dermatitis...
that causes skin and mucous membrane irritation to humans. When burned, inhalation of the smoke may cause the rash to appear on the lining of the lungs, causing extreme pain and possibly fatal respiratory difficulty.

Poison sumac is a shrub or small tree, up to 20 feet in height, with 7-13 leaflets per pinnate
Pinnate
Pinnate is a term used to describe feather-like or multi-divided features arising from both sides of a common axis in plant or animal structures, and comes from the Latin word pinna meaning "feather", "wing", or "fin". A similar term is pectinate, which refers to a comb-like arrangement of parts...
leaf. These are oval to oblong; acuminate (tapering to a sharp point); cuneate (wedge-shaped) at the base; undulate (wavy-edged); underside is glabrous (hair-less) or slightly pubescent (down-like hair) beneath, and are usually 2-4 inch long. Its flowers are greenish, in loose axillary panicles (clusters) 3-8 inches long. The fruits are subglobose (not quite spherical), gray, flattened and about 0.2 inches across. 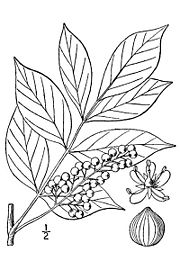 Poison sumac grows exclusively in very wet or flooded soils, usually in swamp
Swamp
A swamp is a wetland with some flooding of large areas of land by shallow bodies of water. A swamp generally has a large number of hammocks, or dry-land protrusions, covered by aquatic vegetation, or vegetation that tolerates periodical inundation. The two main types of swamp are "true" or swamp...
s and peat bog
Bog
A bog, quagmire or mire is a wetland that accumulates acidic peat, a deposit of dead plant material—often mosses or, in Arctic climates, lichens....
s, in the eastern United States
United States
The United States of America is a federal constitutional republic comprising fifty states and a federal district...
and Canada
Canada
Canada is a North American country consisting of ten provinces and three territories. Located in the northern part of the continent, it extends from the Atlantic Ocean in the east to the Pacific Ocean in the west, and northward into the Arctic Ocean...
.

In terms of its potential to cause urushiol-induced contact dermatitis, poison sumac is far more virulent than its relatives poison ivy
Poison ivy
Toxicodendron radicans, better known as poison ivy , is a poisonous North American plant that is well known for its production of urushiol, a clear liquid compound found within the sap of the plant that causes an itching rash in most people who touch it...
and poison oak
Poison oak
Poison oak may refer to* Toxicodendron diversilobum, grows on West Coast of North America* Toxicodendron pubescens, grows in the Eastern United Statesdamnnnnn tissss is terribleee...
. According to some botanists, poison sumac is the most toxic plant species in the United States (Frankel, 1991).

The poison shows itself in painful and long continued swellings and eruptions.