Encyclopedia
Podhale Rifles is the traditional name of the mountain infantry units of the Polish Army. Formed in 1918 out of volunteers of the region of Podhale
Podhale
The Podhale is Poland's most southern region, sometimes referred to as the "Polish highlands". The Podhale is located in the foothills of the Tatra range of the Carpathian mountains, and is characterized by a rich tradition of folklore that is much romanticized in the Polish patriotic imagination...
, in 1919 the smaller detachments of Podhale Rifles were pressed into two mountain infantry divisions, the 21st Mountain Infantry and 22nd Mountain Infantry Divisions, as well as into three brigades of mountain infantry. Considered an elite
Elite
Elite refers to an exceptional or privileged group that wields considerable power within its sphere of influence...
of the Polish Army, the units were roughly equivalent to the German Gebirgsjäger
Gebirgsjäger
Gebirgsjäger, in English Mountain Riflemen, is the German designation for mountain infantry. The word Jäger is the traditional German term for rifleman...
troops.

After the Polish defeat in the Polish September Campaign
Invasion of Poland (1939)
The Invasion of Poland, also known as the September Campaign or 1939 Defensive War in Poland and the Poland Campaign in Germany, was an invasion of Poland by Germany, the Soviet Union, and a small Slovak contingent that marked the start of World War II in Europe...
, the Podhale units were recreated in France as Polish Independent Highland Brigade
Polish Independent Highland Brigade
The Polish Independent Highland Brigade was a Polish military unit created in France in 1939, after the fall of Poland, as part of the Polish Army in France. It had approximately 5,000 soldiers trained in mountain warfare and was commanded by General Zygmunt Szyszko-Bohusz...
, had seen some action at Narvik
Narvik
is the third largest city and municipality in Nordland county, Norway by population. Narvik is located on the shores of the Narvik Fjord . The municipality is part of the Ofoten traditional region of North Norway, inside the arctic circle...
, and later fought in the Battle of France
Battle of France
In the Second World War, the Battle of France was the German invasion of France and the Low Countries, beginning on 10 May 1940, which ended the Phoney War. The battle consisted of two main operations. In the first, Fall Gelb , German armoured units pushed through the Ardennes, to cut off and...
and fled into Switzerland
Switzerland
Switzerland name of one of the Swiss cantons. ; ; ; or ), in its full name the Swiss Confederation , is a federal republic consisting of 26 cantons, with Bern as the seat of the federal authorities. The country is situated in Western Europe,Or Central Europe depending on the definition....
upon the French defeat. Some units were also created in the underground as part of the partisan forces of the Armia Krajowa
Armia Krajowa
The Armia Krajowa , or Home Army, was the dominant Polish resistance movement in World War II German-occupied Poland. It was formed in February 1942 from the Związek Walki Zbrojnej . Over the next two years, it absorbed most other Polish underground forces...
. The traditions of the Podhale Rifles are continued by the modern 21st Podhale Rifles Brigade.

The traditional symbols of the Podhale Rifles include the edelweiss
Edelweiss
Edelweiss , Leontopodium alpinum, is a well-known European mountain flower, belonging to the sunflower family.-Names:The common name comes from German edel, meaning "noble", and weiß "white", thus signifying "noble whiteness".The scientific name Leontopodium is a Latin adaptation of Greek...
flower and the Mountain Cross, a swastika
Swastika
The swastika is an equilateral cross with its arms bent at right angles, in either right-facing form in counter clock motion or its mirrored left-facing form in clock motion. Earliest archaeological evidence of swastika-shaped ornaments dates back to the Indus Valley Civilization of Ancient...
symbol popular in folk culture of the Polish mountainous regions. The units of Podhale Rifles, both historical and modern, are notable for their high morale and distinctive uniforms. Prior to World War II
World War II
World War II, or the Second World War , was a global conflict lasting from 1939 to 1945, involving most of the world's nations—including all of the great powers—eventually forming two opposing military alliances: the Allies and the Axis...
the mountain units were one of only two infantry units wearing non-standard uniforms based on Mountaineer folk garment rather than military uniforms. This tradition is continued.

Units and their badges 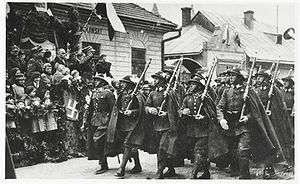 The table below shows the allegiance of the regiments of Podhale Rifles as of September 1, 1939.