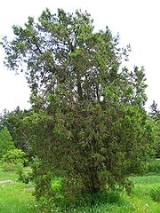 Encyclopedia
Platycladus is a distinct genus
Genus
In biology, a genus is a low-level taxonomic rank used in the biological classification of living and fossil organisms, which is an example of definition by genus and differentia...
of evergreen
Evergreen
In botany, an evergreen plant is a plant that has leaves in all seasons. This contrasts with deciduous plants, which completely lose their foliage during the winter or dry season.There are many different kinds of evergreen plants, both trees and shrubs...
coniferous
Pinophyta
The conifers, division Pinophyta, also known as division Coniferophyta or Coniferae, are one of 13 or 14 division level taxa within the Kingdom Plantae. Pinophytes are gymnosperms. They are cone-bearing seed plants with vascular tissue; all extant conifers are woody plants, the great majority being...
tree
Tree
A tree is a perennial woody plant. It is most often defined as a woody plant that has many secondary branches supported clear of the ground on a single main stem or trunk with clear apical dominance. A minimum height specification at maturity is cited by some authors, varying from 3 m to...
in the cypress family Cupressaceae
Cupressaceae
The Cupressaceae or cypress family is a conifer family with worldwide distribution. The family includes 27 to 30 genera , which include the junipers and redwoods, with about 130-140 species in total. They are monoecious, subdioecious or dioecious trees and shrubs from 1-116 m tall...
, containing only one species, Platycladus orientalis, also known as Chinese Arborvitae or Biota. It is endemic to Northwestern China
Northwestern China
Northwestern China includes the autonomous regions of Xinjiang and Ningxia and the provinces of Shaanxi, Gansu, and Qinghai.-Administrative divisions:ProvincesAutonomous Regions-Outer Northwest China:...
. It is also now naturalised
Naturalisation (biology)
In biology, naturalisation is any process by which a non-native organism spreads into the wild and its reproduction is sufficient to maintain its population. Such populations are said to be naturalised....
as an introduced species
Introduced species
An introduced species — or neozoon, alien, exotic, non-indigenous, or non-native species, or simply an introduction, is a species living outside its indigenous or native distributional range, and has arrived in an ecosystem or plant community by human activity, either deliberate or accidental...
elsewhere in Asia
Asia
Asia is the world's largest and most populous continent, located primarily in the eastern and northern hemispheres. It covers 8.7% of the Earth's total surface area and with approximately 3.879 billion people, it hosts 60% of the world's current human population...
: eastward to Korea
Korea
Korea ) is an East Asian geographic region that is currently divided into two separate sovereign states — North Korea and South Korea. Located on the Korean Peninsula, Korea is bordered by the People's Republic of China to the northwest, Russia to the northeast, and is separated from Japan to the...
and Japan
Japan
Japan is an island nation in East Asia. Located in the Pacific Ocean, it lies to the east of the Sea of Japan, China, North Korea, South Korea and Russia, stretching from the Sea of Okhotsk in the north to the East China Sea and Taiwan in the south...
; southward to northern India
India
India , officially the Republic of India , is a country in South Asia. It is the seventh-largest country by geographical area, the second-most populous country with over 1.2 billion people, and the most populous democracy in the world...
; and westward to northern Iran
Iran
Iran , officially the Islamic Republic of Iran , is a country in Southern and Western Asia. The name "Iran" has been in use natively since the Sassanian era and came into use internationally in 1935, before which the country was known to the Western world as Persia...
;

Although generally accepted as only member of its genus, it has been suggested that the closely related species Microbiota decussata
Microbiota
Microbiota is a monotypic] genus of evergreen coniferous shrub in the cypress family Cupressaceae, containing only one species, Microbiota decussata...
could be included in Platycladus, but this is not widely followed. Other fairly close relatives are the genera Juniperus and Cupressus
Cupressus
The genus Cupressus is one of several genera within the family Cupressaceae that have the common name cypress; for the others, see cypress. It is considered a polyphyletic group...
, both of these genera being graft-compatible
Grafting
Grafting is a horticultural technique whereby tissues from one plant are inserted into those of another so that the two sets of vascular tissues may join together. This vascular joining is called inosculation...
with Platycladus. In older texts, Platycladus was often included in Thuja
Thuja
Thuja is a genus of coniferous trees in the Cupressaceae . There are five species in the genus, two native to North America and three native to eastern Asia...
, but it is only distantly related to that genus. Differences from Thuja include its distinct cones, wingless seeds, and its almost scentless foliage. 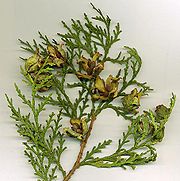 It is a small, slow-growing tree, to 15-20 m tall and 0.5 m trunk diameter (exceptionally to 30 m tall and 2 m diameter in very old trees). The foliage forms in flat sprays with scale-like leaves
Leaf
A leaf is an organ of a vascular plant, as defined in botanical terms, and in particular in plant morphology. Foliage is a mass noun that refers to leaves as a feature of plants....
2-4 mm long. The cones
Conifer cone
A cone is an organ on plants in the division Pinophyta that contains the reproductive structures. The familiar woody cone is the female cone, which produces seeds. The male cones, which produce pollen, are usually herbaceous and much less conspicuous even at full maturity...
are 15-25 mm long, green ripening brown in about 8 months from pollination, and have 6-12 thick scales arranged in opposite pairs. The seed
Seed
A seed is a small embryonic plant enclosed in a covering called the seed coat, usually with some stored food. It is the product of the ripened ovule of gymnosperm and angiosperm plants which occurs after fertilization and some growth within the mother plant...
s are 4-6 mm long, with no wing.

The common name 'arborvitae' is from Latin, 'tree of life', and is based on its association with long life and vitality in Buddhist thought in China. This is probably based on the tree's unchanging evergreen
Evergreen
In botany, an evergreen plant is a plant that has leaves in all seasons. This contrasts with deciduous plants, which completely lose their foliage during the winter or dry season.There are many different kinds of evergreen plants, both trees and shrubs...
nature in the cold dry climate of northwest China, and its longevity; some of the larger specimens planted around Buddhist temple
Temple
A temple is a structure reserved for religious or spiritual activities, such as prayer and sacrifice, or analogous rites. A templum constituted a sacred precinct as defined by a priest, or augur. It has the same root as the word "template," a plan in preparation of the building that was marked out...
s in China are said to be in excess of 1,000 years old. It is called ce bai (側柏) in Chinese
Chinese language
The Chinese language is a language or language family consisting of varieties which are mutually intelligible to varying degrees. Originally the indigenous languages spoken by the Han Chinese in China, it forms one of the branches of Sino-Tibetan family of languages...
.

It is very widely used as an ornamental tree, both in its homeland, where it is associated with long life and vitality, and very widely elsewhere in temperate
Temperate
In geography, temperate or tepid latitudes of the globe lie between the tropics and the polar circles. The changes in these regions between summer and winter are generally relatively moderate, rather than extreme hot or cold...
climate
Climate
Climate encompasses the statistics of temperature, humidity, atmospheric pressure, wind, rainfall, atmospheric particle count and other meteorological elemental measurements in a given region over long periods...
s. The wood
Wood
Wood is a hard, fibrous tissue found in many trees. It has been used for hundreds of thousands of years for both fuel and as a construction material. It is an organic material, a natural composite of cellulose fibers embedded in a matrix of lignin which resists compression...
is used in Buddhist temples, both for construction work, and chipped, for incense
Incense
Incense is composed of aromatic biotic materials, which release fragrant smoke when burned. The term "incense" refers to the substance itself, rather than to the odor that it produces. It is used in religious ceremonies, ritual purification, aromatherapy, meditation, for creating a mood, and for...
burning.