Encyclopedia
Plasminogen activator inhibitor-1 (PAI-1) also known as endothelial plasminogen activator inhibitor or serpin E1 is a protein
Protein
Proteins are biochemical compounds consisting of one or more polypeptides typically folded into a globular or fibrous form, facilitating a biological function. A polypeptide is a single linear polymer chain of amino acids bonded together by peptide bonds between the carboxyl and amino groups of...
that in humans is encoded by the SERPINE1 gene
Gene
A gene is a molecular unit of heredity of a living organism. It is a name given to some stretches of DNA and RNA that code for a type of protein or for an RNA chain that has a function in the organism. Living beings depend on genes, as they specify all proteins and functional RNA chains...
.

PAI-1 is a serine protease inhibitor (serpin
Serpin
Serpins are a group of proteins with similar structures that were first identified as a set of proteins able to inhibit proteases. The acronym serpin was originally coined because many serpins inhibit chymotrypsin-like serine proteases .The first members of the serpin superfamily to be extensively...
) that functions as the principal inhibitor of tissue plasminogen activator
Tissue plasminogen activator
Tissue plasminogen activator is a protein involved in the breakdown of blood clots. It is a serine protease found on endothelial cells, the cells that line the blood vessels. As an enzyme, it catalyzes the conversion of plasminogen to plasmin, the major enzyme responsible for clot breakdown...
(tPA) and urokinase
Urokinase
Urokinase , also called urokinase-type plasminogen activator , is a serine protease . Urokinase was originally isolated from human urine, but is present in several physiological locations, such as blood stream and the extracellular matrix...
(uPA), the activators of plasmin
Plasmin
Plasmin is an important enzyme present in blood that degrades many blood plasma proteins, most notably, fibrin clots. The degradation of fibrin is termed fibrinolysis. In humans, the plasmin protein is encoded by the PLG gene.- Function :...
ogen and hence fibrinolysis
Fibrinolysis
Fibrinolysis is a process that prevents blood clots from growing and becoming problematic. This process has two types: primary fibrinolysis and secondary fibrinolysis...
(the physiological breakdown of blood clots
Thrombus
A thrombus , or blood clot, is the final product of the blood coagulation step in hemostasis. It is achieved via the aggregation of platelets that form a platelet plug, and the activation of the humoral coagulation system...
). It is a serine protease inhibitor (serpin) protein (SERPINE1).

The other PAI, plasminogen activator inhibitor-2
Plasminogen activator inhibitor-2
Plasminogen activator inhibitor-2 is a coagulation factor that inactivates tPA and urokinase. It is present in most cells, especially monocytes/macrophages...
(PAI-2) is secreted by the placenta
Placenta
The placenta is an organ that connects the developing fetus to the uterine wall to allow nutrient uptake, waste elimination, and gas exchange via the mother's blood supply. "True" placentas are a defining characteristic of eutherian or "placental" mammals, but are also found in some snakes and...
and only present in significant amounts during pregnancy
Pregnancy
Pregnancy refers to the fertilization and development of one or more offspring, known as a fetus or embryo, in a woman's uterus. In a pregnancy, there can be multiple gestations, as in the case of twins or triplets...
. In addition, protease nexin acts as an inhibitor of tPA and urokinase. PAI-1, however, is the main inhibitor of the plasminogen activators.

The PAI-1 gene
Gene
A gene is a molecular unit of heredity of a living organism. It is a name given to some stretches of DNA and RNA that code for a type of protein or for an RNA chain that has a function in the organism. Living beings depend on genes, as they specify all proteins and functional RNA chains...
is officially called SERPINE1 and is located on the seventh chromosome
Chromosome
A chromosome is an organized structure of DNA and protein found in cells. It is a single piece of coiled DNA containing many genes, regulatory elements and other nucleotide sequences. Chromosomes also contain DNA-bound proteins, which serve to package the DNA and control its functions.Chromosomes...
(7q21.3-q22). There is a common polymorphism
Polymorphism (biology)
Polymorphism in biology occurs when two or more clearly different phenotypes exist in the same population of a species — in other words, the occurrence of more than one form or morph...
known as 4G/5G in the promoter region. The 5G allele is slightly less transcriptionally active than the 4G.

PAI-1 is mainly produced by the endothelium
Endothelium
The endothelium is the thin layer of cells that lines the interior surface of blood vessels, forming an interface between circulating blood in the lumen and the rest of the vessel wall. These cells are called endothelial cells. Endothelial cells line the entire circulatory system, from the heart...
(cells lining blood vessel
Blood vessel
The blood vessels are the part of the circulatory system that transports blood throughout the body. There are three major types of blood vessels: the arteries, which carry the blood away from the heart; the capillaries, which enable the actual exchange of water and chemicals between the blood and...
s), but is also secreted by other tissue types, such as adipose tissue
Adipose tissue
In histology, adipose tissue or body fat or fat depot or just fat is loose connective tissue composed of adipocytes. It is technically composed of roughly only 80% fat; fat in its solitary state exists in the liver and muscles. Adipose tissue is derived from lipoblasts...
.

PAI-1 inhibits the activity of matrix metalloproteinases, which play a crucial role in invasion of malignant cells across the basal lamina. 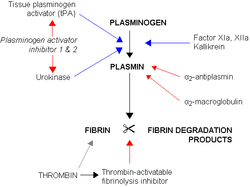 Congenital deficiency of PAI-1 has been reported; as fibrinolysis is not suppressed adequately, it leads to a hemorrhagic diathesis (a tendency to hemorrhage).

PAI-1 is present in increased levels in various disease states (such as a number of forms of cancer
Cancer
Cancer , known medically as a malignant neoplasm, is a large group of different diseases, all involving unregulated cell growth. In cancer, cells divide and grow uncontrollably, forming malignant tumors, and invade nearby parts of the body. The cancer may also spread to more distant parts of the...
), as well as in obesity
Obesity
Obesity is a medical condition in which excess body fat has accumulated to the extent that it may have an adverse effect on health, leading to reduced life expectancy and/or increased health problems...
and the metabolic syndrome
Metabolic syndrome
Metabolic syndrome is a combination of medical disorders that, when occurring together, increase the risk of developing cardiovascular disease and diabetes. It affects one in five people in the United States and prevalence increases with age...
. It has been linked to the increased occurrence of thrombosis
Thrombosis
Thrombosis is the formation of a blood clot inside a blood vessel, obstructing the flow of blood through the circulatory system. When a blood vessel is injured, the body uses platelets and fibrin to form a blood clot to prevent blood loss...
in patients with these conditions.

In inflammatory conditions in which fibrin
Fibrin
Fibrin is a fibrous, non-globular protein involved in the clotting of blood. It is a fibrillar protein that is polymerised to form a "mesh" that forms a hemostatic plug or clot over a wound site....
is deposited in tissues, PAI-1 appears to play a significant role in the progression to fibrosis
Fibrosis
Fibrosis is the formation of excess fibrous connective tissue in an organ or tissue in a reparative or reactive process. This is as opposed to formation of fibrous tissue as a normal constituent of an organ or tissue...
(pathological formation of connective tissue
Connective tissue
"Connective tissue" is a fibrous tissue. It is one of the four traditional classes of tissues . Connective Tissue is found throughout the body.In fact the whole framework of the skeleton and the different specialized connective tissues from the crown of the head to the toes determine the form of...
). Presumably, lower PAI levels would lead to less suppression of fibrinolysis and conversely a more rapid degradation of the fibrin.

Angiotensin II increases synthesis of plasminogen activator inhibitor-1, so it accelerates the development of atherosclerosis.

Plasminogen activator inhibitor-1 has been shown to interact
Protein-protein interaction
Protein–protein interactions occur when two or more proteins bind together, often to carry out their biological function. Many of the most important molecular processes in the cell such as DNA replication are carried out by large molecular machines that are built from a large number of protein...
with ORM1
ORM1
Alpha-1-acid glycoprotein 1 is a protein that in humans is encoded by the ORM1 gene.-Interactions:ORM1 has been shown to interact with Plasminogen activator inhibitor-1.-Further reading:...
.