The pitch drop experiment is a long-term
Long-term experiment
A long-term experiment is an experimental procedure that runs through a long period of time, in order to test a hypothesis or observe a phenomenon that takes place at an extremely slow rate....
experiment
Experiment
An experiment is a methodical procedure carried out with the goal of verifying, falsifying, or establishing the validity of a hypothesis. Experiments vary greatly in their goal and scale, but always rely on repeatable procedure and logical analysis of the results...
which measures the flow of a piece of pitch
Pitch (resin)
Pitch is the name for any of a number of viscoelastic, solid polymers. Pitch can be made from petroleum products or plants. Petroleum-derived pitch is also called bitumen. Pitch produced from plants is also known as resin. Products made from plant resin are also known as rosin.Pitch was...
over many years. Pitch is the name for any of a number of highly viscous
Viscosity
Viscosity is a measure of the resistance of a fluid which is being deformed by either shear or tensile stress. In everyday terms , viscosity is "thickness" or "internal friction". Thus, water is "thin", having a lower viscosity, while honey is "thick", having a higher viscosity...
liquids which appear solid, most commonly bitumen. At room temperature, tar pitch flows at a very slow rate, taking several years to form a single drop.


The pitch drop experiment at the University of Queensland

The most famous version of the experiment
Experiment
An experiment is a methodical procedure carried out with the goal of verifying, falsifying, or establishing the validity of a hypothesis. Experiments vary greatly in their goal and scale, but always rely on repeatable procedure and logical analysis of the results...
was started in 1927 by Professor
Professor
A professor is a scholarly teacher; the precise meaning of the term varies by country. Literally, professor derives from Latin as a "person who professes" being usually an expert in arts or sciences; a teacher of high rank...
Thomas Parnell
Thomas Parnell (scientist)
Thomas Parnell was the first Professor of Physics at the University of Queensland. He started the famous pitch drop experiment there....
of the University of Queensland
University of Queensland
The University of Queensland, also known as UQ, is a public university located in state of Queensland, Australia. Founded in 1909, it is the oldest and largest university in Queensland and the fifth oldest in the nation...
in Brisbane
Brisbane
Brisbane is the capital and most populous city in the Australian state of Queensland and the third most populous city in Australia. Brisbane's metropolitan area has a population of over 2 million, and the South East Queensland urban conurbation, centred around Brisbane, encompasses a population of...
, Australia
Australia
Australia , officially the Commonwealth of Australia, is a country in the Southern Hemisphere comprising the mainland of the Australian continent, the island of Tasmania, and numerous smaller islands in the Indian and Pacific Oceans. It is the world's sixth-largest country by total area...
, to demonstrate to students that some substances that appear to be solid are in fact very-high-viscosity fluids. Parnell poured a heated sample of pitch into a sealed funnel
Funnel
A funnel is a pipe with a wide, often conical mouth and a narrow stem. It is used to channel liquid or fine-grained substances into containers with a small opening. Without a funnel, spillage would occur....
and allowed it to settle for three years. In 1930, the seal at the neck of the funnel was cut, allowing the pitch to start flowing. Large droplets form and fall over the period of about a decade
Decade
A decade is a period of 10 years. The word is derived from the Ancient Greek dekas which means ten. This etymology is sometime confused with the Latin decas and dies , which is not correct....
. The eighth drop fell on 28 November 2000, allowing experimenters to calculate that the pitch has a viscosity
Viscosity
Viscosity is a measure of the resistance of a fluid which is being deformed by either shear or tensile stress. In everyday terms , viscosity is "thickness" or "internal friction". Thus, water is "thin", having a lower viscosity, while honey is "thick", having a higher viscosity...
approximately 230 billion (2.3) times that of water
Water
Water is a chemical substance with the chemical formula H2O. A water molecule contains one oxygen and two hydrogen atoms connected by covalent bonds. Water is a liquid at ambient conditions, but it often co-exists on Earth with its solid state, ice, and gaseous state . Water also exists in a...
.

This is recorded in the Guinness Book of Records as the world's longest continuously running laboratory experiment, and it is expected that there is enough pitch in the funnel to allow it to continue for at least another hundred years. This experiment is pre-dated by two other still-active scientific devices, the Oxford Electric Bell
Oxford Electric Bell
The Oxford Electric Bell or Clarendon Dry Pile is an experimental electric bell that was set up in 1840 and which has rung almost continuously ever since. It is located in the foyer of the Clarendon Laboratory at the University of Oxford, England...
(1840) and the Beverly Clock
Beverly Clock
The Beverly Clock is a clock situated in the foyer of the Department of Physics at the University of Otago, Dunedin, New Zealand. The clock is still running despite never having been manually wound since its construction in 1864 by Arthur Beverly....
(1864).

The experiment was not originally carried out under any special controlled atmospheric conditions, meaning that the viscosity could vary throughout the year with fluctuations in temperature
Temperature
Temperature is a physical property of matter that quantitatively expresses the common notions of hot and cold. Objects of low temperature are cold, while various degrees of higher temperatures are referred to as warm or hot...
. However, sometime after the seventh drop fell in 1988, air conditioning was added to the location where the experiment resided. The temperature stability has lengthened each drop's stretch before it separates from the rest of the pitch in the funnel. 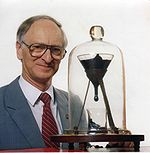 To date, no one has ever actually witnessed a drop fall. The experiment is in the view of a webcam
Webcam
A webcam is a video camera that feeds its images in real time to a computer or computer network, often via USB, ethernet, or Wi-Fi.Their most popular use is the establishment of video links, permitting computers to act as videophones or videoconference stations. This common use as a video camera...
although technical problems prevented the most recent drop from being recorded. The pitch drop experiment is on public display on Level 2 of Parnell Building in the School of Mathematics and Physics at the St Lucia
St Lucia, Queensland
St Lucia is an inner suburb of Brisbane, Australia located 4 km south-west of the Brisbane CBD. The suburb is bordered on three sides by the Brisbane River and is dominated by the main campus of the University of Queensland.-History:...
campus of The University of Queensland.