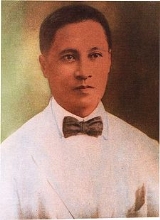 Encyclopedia
Pío Valenzuela was a Filipino
Filipino people
The Filipino people or Filipinos are an Austronesian ethnic group native to the islands of the Philippines. There are about 92 million Filipinos in the Philippines, and about 11 million living outside the Philippines ....
physician
Physician
A physician is a health care provider who practices the profession of medicine, which is concerned with promoting, maintaining or restoring human health through the study, diagnosis, and treatment of disease, injury and other physical and mental impairments...
and patriot
Patriotism
Patriotism is a devotion to one's country, excluding differences caused by the dependencies of the term's meaning upon context, geography and philosophy...
who was among the leaders of the Katipunan
Katipunan
The Katipunan was a Philippine revolutionary society founded by anti-Spanish Filipinos in Manila in 1892, whose primary aim was to gain independence from Spain through revolution. The society was initiated by Filipino patriots Andrés Bonifacio, Teodoro Plata, Ladislao Diwa, and others on the night...
that started the Philippine Revolution
Philippine Revolution
The Philippine Revolution , called the "Tagalog War" by the Spanish, was an armed military conflict between the people of the Philippines and the Spanish colonial authorities which resulted in the secession of the Philippine Islands from the Spanish Empire.The Philippine Revolution began in August...
against Spain. Valenzuela City
Valenzuela City
Valenzuela ,In rare occasion it is pronunced as , with a glottal stop after /ɐ/ in Filipino/Tagalog languages. officially known as the City of Valenzuela is a highly urbanized, first-class city and one of cities in the Philippines that constitutes Metro Manila...
in northern Metro Manila
Metro Manila
Metropolitan Manila , the National Capital Region , or simply Metro Manila, is the metropolitan region encompassing the City of Manila and its surrounding areas in the Philippines...
was named after him.

He wrote his memoirs of the Philippine Revolution in the 1920s, but historians have since been wary of his autobiography because of some inconsistencies in his version of events, particularly about his meeting with José Rizal
José Rizal
José Protacio Rizal Mercado y Alonso Realonda , was a Filipino polymath, patriot and the most prominent advocate for reform in the Philippines during the Spanish colonial era. He is regarded as the foremost Filipino patriot and is listed as one of the national heroes of the Philippines by...
in Dapitan in 1896.

Valenzuela was the first mayor (American regime) of municipality of Polo (now Valenzuela City) from 1899-1900 before he became the governor of Bulacan province
Bulacan
Bulacan , officially called the Province of Bulacan or simply Bulacan Province, is a first class province of the Republic of the Philippines located in the Central Luzon Region in the island of Luzon, north of Manila , and part of the Metro...
from 1921-1925.

Valenzuela was born in Polo, Bulacan
Valenzuela City
Valenzuela ,In rare occasion it is pronunced as , with a glottal stop after /ɐ/ in Filipino/Tagalog languages. officially known as the City of Valenzuela is a highly urbanized, first-class city and one of cities in the Philippines that constitutes Metro Manila...
(Now Barangay Polo, Valenzuela City) to Francisco Valenzuela and Lorenza Alejandrino, who both came from wealthy families.

He was elected fiscal of the secret society in December 1895. He was inducted together with the other elected officials at Bonifacio's home on New Year's Day in 1896.

Shortly after his induction, Valenzuela moved to San Nicolas district in Manila
Manila
Manila is the capital of the Philippines. It is one of the sixteen cities forming Metro Manila.Manila is located on the eastern shores of Manila Bay and is bordered by Navotas and Caloocan to the north, Quezon City to the northeast, San Juan and Mandaluyong to the east, Makati on the southeast,...
so he could supervise the publication of the secret society's official organ. Valenzuela claimed in his memoirs that he was supposed to be the editor of the publication but Emilio Jacinto
Emilio Jacinto
Emilio Jacinto y Dizon , was a Filipino revolutionary known as the Brains of the Katipunan.-Biography:Born in Trozo, Tondo, Manila. Jacinto was the son of Mariano Jacinto and Josefa Dizon...
would eventually be the one to supervise its printing.

Valenzuela said he was the one who suggested the name Kalayaan (Freedom) for the publication. To mislead the Spanish authorities, he also suggested that they place the name of Marcelo H. del Pilar
Marcelo H. del Pilar
Marcelo Hilario del Pilar y Gatmaitán , better known by his nom-de-plume Plaridel, was a celebrated figure in the Philippine Revolution and a leading propagandist for reforms in the Philippines A master polemicist in both the Tagalog and Spanish languages, he helped the Propaganda Movement through...
as editor and Yokohama
Yokohama
is the capital city of Kanagawa Prefecture and the second largest city in Japan by population after Tokyo and most populous municipality of Japan. It lies on Tokyo Bay, south of Tokyo, in the Kantō region of the main island of Honshu...
, Japan as the place of publication.

Kalayaan's first number, dated January 18, 1896, came out in March 1896 and consisted of a thousand copies which was distributed to Katipunan members all over the country. However, the publication only came out with one more issue because the Katipunan had already been uncovered by the Spanish authorities. He considered the publication of Kalayaan as the most important accomplishment of the secret chamber of the Katipunan, which he claimed consisted of himself, Bonifacio and Jacinto.

In a meeting of the secret chamber in July 1896, they decided to assassinate the Spanish Augustinian
Order of Saint Augustine
The Order of St. Augustine —historically Ordo Eremitarum Sancti Augustini", O.E.S.A.), generally called Augustinians is a Catholic Religious Order, which, although more ancient, was formally created in the thirteenth century and combined of several previous Augustinian eremetical Orders into one...
friar who uncovered the Katipunan to the authorities, but they failed to accomplish the mission. Valenzuela also claimed that after the discovery of the Katipunan, he and Bonifacio distributed letters implicating wealthy Filipinos, who refused to extend financial assistance to the Katipunan.

At the secret general meeting called by Bonifacio on the night of May 1, 1896 at Barrio Ugong in Pasig, Valenzuela presented to the body a proposal to solicit contributions to buy arms and munitions from Japan. The proposal was approved on condition that it first be approved by José Rizal
José Rizal
José Protacio Rizal Mercado y Alonso Realonda , was a Filipino polymath, patriot and the most prominent advocate for reform in the Philippines during the Spanish colonial era. He is regarded as the foremost Filipino patriot and is listed as one of the national heroes of the Philippines by...
, who was in exile in Dapitan in Mindanao
Mindanao
Mindanao is the second largest and easternmost island in the Philippines. It is also the name of one of the three island groups in the country, which consists of the island of Mindanao and smaller surrounding islands. The other two are Luzon and the Visayas. The island of Mindanao is called The...
.

Valenzuela was tasked to discuss the matter with Rizal and he left for Dapitan on June 15, 1896. However, Rizal told him that the revolution should not be started until sufficient arms had been secured and the support of the wealthy Filipinos had been won over.

When the Katipunan was discovered, he fled to Balintawak on August 20, 1896, but he later availed of an amnesty that the Spanish colonial government offered and he surrendered on September 1, 1896.

He was deported to Spain where he was tried and imprisoned in Madrid
Madrid
Madrid is the capital and largest city of Spain. The population of the city is roughly 3.3 million and the entire population of the Madrid metropolitan area is calculated to be 6.271 million. It is the third largest city in the European Union, after London and Berlin, and its metropolitan...
. He was later transferred to Málaga
Málaga
Málaga is a city and a municipality in the Autonomous Community of Andalusia, Spain. With a population of 568,507 in 2010, it is the second most populous city of Andalusia and the sixth largest in Spain. This is the southernmost large city in Europe...
, Barcelona
Barcelona
Barcelona is the second largest city in Spain after Madrid, and the capital of Catalonia, with a population of 1,621,537 within its administrative limits on a land area of...
and then to a Spanish outpost in Africa. He was incarcerated for about two years.

He returned to the Philippines in April 1899. In Manila, he was denounced to the American Military authorities as a radical propagandist and once more imprisoned up September of the same year.

To suppress aggressive leadership upon his release, he was made municipal president of Polo. From 1902 to 1919, he served as president of the military division of his district. From 1919 to 1925, he served the people of Bulacan for two terms as provincial executive. As governor, he was uncompromising against graft and corruption in the government.

After he retired from politics, he wrote his memoirs on the revolutionary days. He also practiced his medical profession, but only for philanthropic purposes. He was married to Marciana Castro by whom he had seven children. Early in the morning of April 6, 1956, he died in his hometown.
The source of this article is wikipedia, the free encyclopedia.  The text of this article is licensed under the GFDL.