The city was originally founded by the Voortrekkers
Voortrekkers
The Voortrekkers were emigrants during the 1830s and 1840s who left the Cape Colony moving into the interior of what is now South Africa...
, following the defeat of Dingane
Dingane
Dingane kaSenzangakhona Zulu —commonly referred to as Dingane or Dingaan—was a Zulu chief who became king of the Zulu Kingdom in 1828...
at the Battle of Blood River
Battle of Blood River
The Battle of Blood River, so called due to the colour of water in the Ncome River turning red with blood, was fought between 470 Voortrekkers led by Andries Pretorius, and an estimated 10,000–15,000 Zulu attackers on the bank of the Ncome River on 16 December 1838, in what is today KwaZulu-Natal,...
, and was the capital of the short-lived Boer republic, Natalia
Natalia Republic
The Natalia Republic was a short-lived Boer republic, established in 1839 by local Afrikaans-speaking Voortrekkers shortly after the Battle of Blood River. The republic was located on the coast of the Indian Ocean beyond the Eastern Cape, and was previously named Natalia by Portuguese sailors. The...
. Britain
United Kingdom of Great Britain and Ireland
The United Kingdom of Great Britain and Ireland was the formal name of the United Kingdom during the period when what is now the Republic of Ireland formed a part of it....
took over Pietermaritzburg in 1843 and it became the seat of the Natal Colony's administration with the first lieutenant-governor, Martin West
Martin West
Sir Martin West was born in England, the son of a civil servant in the Treasury.Martin West studied at Balliol College, Oxford, before joining the British East India Company...
, making it his home. Fort Napier, named after the governor of the Cape Colony
Cape Colony
The Cape Colony, part of modern South Africa, was established by the Dutch East India Company in 1652, with the founding of Cape Town. It was subsequently occupied by the British in 1795 when the Netherlands were occupied by revolutionary France, so that the French revolutionaries could not take...
, Sir George Thomas Napier
George Thomas Napier
Lieutenant-General Sir George Thomas Napier KCB entered the British army in 1800, and served with distinction under Sir John Moore and the Duke Wellington in the Peninsula--and lost his right arm at the storming of Ciudad Rodrigo, where, as a Major in the 52nd Foot, he led the Light Division's...
, was built to house a garrison. In 1893 Natal received responsibility for their own government and an assembly building was built along with the city hall. In 1910, when the Union of South Africa
Union of South Africa
The Union of South Africa is the historic predecessor to the present-day Republic of South Africa. It came into being on 31 May 1910 with the unification of the previously separate colonies of the Cape, Natal, Transvaal and the Orange Free State...
was formed, Natal became a province of the union, and Pietermaritzburg remained the capital.

There exist two interpretations about the origin of the city's name. One is that it was named after Piet Retief
Piet Retief
Pieter Mauritz Retief was a South African Boer leader. Settling in 1814 in the frontier region of the Cape Colony, he assumed command of punitive expeditions in response to raiding parties from the adjacent Xhosa territory...
and Gert (Gerrit) Maritz, two famous Voortrekker leaders. The other is that it was originally named after Piet Retief alone, since his full name was Pieter Mouriets Retief. In this interpretation the original name was "Pieter Mouriets Burg", later transliterated to the current name (Jenkins, 1971:11).

Retief was killed by Dingane
Dingane
Dingane kaSenzangakhona Zulu —commonly referred to as Dingane or Dingaan—was a Zulu chief who became king of the Zulu Kingdom in 1828...
, successor to Shaka
Shaka
Shaka kaSenzangakhona , also known as Shaka Zulu , was the most influential leader of the Zulu Kingdom....
, king of the Zulus
Zulu Kingdom
The Zulu Kingdom, sometimes referred to as the Zulu Empire or, rather imprecisely, Zululand, was a monarchy in Southern Africa that extended along the coast of the Indian Ocean from the Tugela River in the south to Pongola River in the north....
. Maritz died of illness on 23 September 1838 near the present-day town of Estcourt, some hundreds of kilometres northwest of Pietermaritzburg. This was after the battle with the Zulus at Bloukranz, and Maritz did not ever reach the Pietermaritzburg area. In 1938, however, the city announced officially that the second element Maritz should also honour Gert Maritz.

At the time of the rise of the Zulu Empire, the site that was to become Pietermaritzburg was called Umgungundlovu. This is popularly translated from the Zulu as "Place of the Elephant", although it could also be translated to mean "The elephant wins". Umgungundlovu is thus thought to be the site of some Zulu king's victory, since "Elephant" (Indlovu) is a name traditionally taken by the Zulu monarch. Legend has it that Shaka had his warriors hunt elephant there to sell the ivory to English traders at Durban (then called Port Natal). Today, the town is still called by its Voortrekker name, although the municipality of which it is part bears the Zulu name.

During apartheid, the city was segregated into various sections. 90% of the Indian population was moved to the suburb of Northdale while most of its Zulu inhabitants were moved to the neighbouring township
Township (South Africa)
In South Africa, the term township and location usually refers to the urban living areas that, from the late 19th century until the end of Apartheid, were reserved for non-whites . Townships were usually built on the periphery of towns and cities...
of Edendale.

Pietermaritzburg is also famous for an incident early in the life of Mahatma Gandhi
Mahatma Gandhi
Mohandas Karamchand Gandhi , pronounced . 2 October 1869 – 30 January 1948) was the pre-eminent political and ideological leader of India during the Indian independence movement...
. In May 1893, while Gandhi was on his way to Pretoria
Pretoria
Pretoria is a city located in the northern part of Gauteng Province, South Africa. It is one of the country's three capital cities, serving as the executive and de facto national capital; the others are Cape Town, the legislative capital, and Bloemfontein, the judicial capital.Pretoria is...
, a white man objected to Gandhi's presence in a first-class carriage, and he was ordered to move to the van compartment
Baggage car
A baggage car or luggage van is a type of railway vehicle often forming part of the composition of passenger trains and used to carry passengers' checked baggage, as well as parcels . Being typically coupled at the front of the train behind the locomotive, this type of car is sometimes described...
at the end of the train. Gandhi, who had a first-class ticket, refused, and was thrown off the train at Pietermaritzburg. Shivering through the winter night in the waiting room of the station
Pietermaritzburg railway station
Pietermaritzburg railway station is the main railway station in Pietermaritzburg, South Africa. It is located on Railway and Pine Streets in the South Western corner of the city centre. The station is a stop on long-distance passenger rail services operated by Shosholoza Meyl...
, Gandhi made the momentous decision to stay on in South Africa and fight the racial discrimination
Racism
Racism is the belief that inherent different traits in human racial groups justify discrimination. In the modern English language, the term "racism" is used predominantly as a pejorative epithet. It is applied especially to the practice or advocacy of racial discrimination of a pernicious nature...
against Indians there. Out of that struggle emerged his unique version of nonviolent resistance
Nonviolent resistance
Nonviolent resistance is the practice of achieving goals through symbolic protests, civil disobedience, economic or political noncooperation, and other methods, without using violence. It is largely synonymous with civil resistance...
, Satyagraha
Satyagraha
Satyagraha , loosely translated as "insistence on truth satya agraha soul force" or "truth force" is a particular philosophy and practice within the broader overall category generally known as nonviolent resistance or civil resistance. The term "satyagraha" was conceived and developed by Mahatma...
. Today, a bronze statue of Gandhi stands in Church Street, in the city centre. 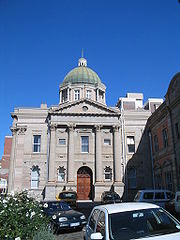 Prior to the end of apartheid in 1994, Pietermaritzburg was the capital of Natal Province
Natal Province
Natal, meaning "Christmas" in Portuguese, was a province of South Africa from 1910 until 1994. Its capital was Pietermaritzburg. The Natal Province included the bantustan of KwaZulu...
. Following the first post-apartheid elections in South Africa, as a result of which the Inkatha Freedom Party
Inkatha Freedom Party
The Inkatha Freedom Party is a political party in South Africa. Since its founding, it has been led by Mangosuthu Buthelezi. It is currently the fourth largest party in the National Assembly of South Africa.-History:...
won a majority in the KwaZulu-Natal provincial government, Pietermaritzburg shared its status as capital of the (then newly created) province of KwaZulu-Natal with Ulundi. Pietermaritzburg became the legislative capital of the new province, while Ulundi became the administrative capital. The IFP, being strongly Zulu nationalist, desired that Ulundi, the capital of the Zulu Kingdom at the time of its fall to the British in the Anglo-Zulu War
Anglo-Zulu War
The Anglo-Zulu War was fought in 1879 between the British Empire and the Zulu Kingdom.Following the imperialist scheme by which Lord Carnarvon had successfully brought about federation in Canada, it was thought that a similar plan might succeed with the various African kingdoms, tribal areas and...
, be the post-apartheid capital of the province. Ulundi had also been the capital of the bantustan
Bantustan
A bantustan was a territory set aside for black inhabitants of South Africa and South West Africa , as part of the policy of apartheid...
KwaZulu
KwaZulu
KwaZulu was a bantustan in South Africa, intended by the apartheid government as a semi-independent homeland for the Zulu people. The capital, formerly at Nongoma, was moved in 1980 to Ulundi....
, which makes up a portion of modern KwaZulu-Natal. However, Ulundi severely lacked the infrastructure to be an effective seat of government, and the African National Congress
African National Congress
The African National Congress is South Africa's governing Africanist political party, supported by its tripartite alliance with the Congress of South African Trade Unions and the South African Communist Party , since the establishment of non-racial democracy in April 1994. It defines itself as a...
(ANC) and the Democratic Party
Democratic Party (South Africa)
The Democratic Party was the name of the South African political party now called the Democratic Alliance . Although the Democratic Party name dates from 1989, the party existed under other labels throughout the Apartheid years, when it was the Parliamentary opposition to the ruling National...
, the two other strong political parties in the province, among others, called for Pietermaritzburg alone to be the capital. The debate came to an end when the ANC came to power in the province in 2004, and named Pietermaritzburg the sole capital of KwaZulu-Natal. This has resulted in the relocation of several government offices to Pietermaritzburg. This has generally been welcomed as a positive development for the region. Since 2004, progress such as the modernisation of several buildings in the city centre and a proliferation of retail and housing developments in the suburbs are results of recent investment in the city by both the public and private sectors.

Some of the many Tourist Attractions include; The Natal Museum, Tatham Art Gallery, City Hall and SANBI Botanical Gardens.

Some of the many Entertainments include; Golden Horse Casino and Liberty Midlands Mall.