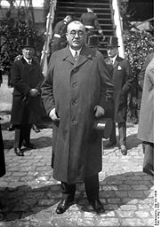 Noske was born in Brandenburg an der Havel. He was a Master Butcher by trade, who had climbed the political ladder within the trade union movement. He was a member of the Social Democratic Party
Social Democratic Party of Germany
The Social Democratic Party of Germany is a social-democratic political party in Germany...
and became a member of the German Parliament
Reichstag (German Empire)
The Reichstag was the parliament of the North German Confederation , and of the German Reich ....
in 1906, where he remained during World War I
World War I
World War I , which was predominantly called the World War or the Great War from its occurrence until 1939, and the First World War or World War I thereafter, was a major war centred in Europe that began on 28 July 1914 and lasted until 11 November 1918...
. He had long shown an interest in military and colonial affairs. 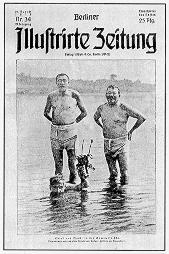 Noske is regarded as a moderate and pragmatic Social Democrat; however, many in the party in his lifetime were angered by such acts as Noske's voting for the construction of new dreadnought
Dreadnought
The dreadnought was the predominant type of 20th-century battleship. The first of the kind, the Royal Navy's had such an impact when launched in 1906 that similar battleships built after her were referred to as "dreadnoughts", and earlier battleships became known as pre-dreadnoughts...
s for the German Navy, at the time when the pre-1914 Social Democratic Party took a strongly anti-militarist and anti-war position. Noske justified his act by the argument that naval construction created jobs for shipyard workers. In the 1914-1918 period, the Party's outspoken support for Germany's participation in the First World War in effect affirmed the deviant position taken by Noske in the pre-war years.

Best known for putting down the Communist and left wing risings throughout Germany in early 1919, Noske was and remains a controversial figure. To crush the incipient revolution, he permitted and even encouraged the organization and employment of right-wing, nationalist Freikorps
Freikorps
Freikorps are German volunteer military or paramilitary units. The term was originally applied to voluntary armies formed in German lands from the middle of the 18th century onwards. Between World War I and World War II the term was also used for the paramilitary organizations that arose during...
. Between January 10 and January 17, 1919 they, together with Reichswehr
Reichswehr
The Reichswehr formed the military organisation of Germany from 1919 until 1935, when it was renamed the Wehrmacht ....
troops under the command of General von Lüttwitz
Walther von Lüttwitz
Walther von Lüttwitz was a German general known for his involvement in the Kapp-Lüttwitz Putsch.Lüttwitz was born in Bodland near Kreuzburg in Upper Silesia. During World War I, Lüttwitz held several high military ranks...
, crushed the Spartacist revolt
Spartacist uprising
The Spartacist Uprising , also known as the January uprising , was a general strike in Germany from January 5 to January 15, 1919. Its suppression marked the end of the German Revolution...
by military force, the leaders - Rosa Luxemburg
Rosa Luxemburg
Rosa Luxemburg was a Marxist theorist, philosopher, economist and activist of Polish Jewish descent who became a naturalized German citizen...
and Karl Liebknecht
Karl Liebknecht
was a German socialist and a co-founder with Rosa Luxemburg of the Spartacist League and the Communist Party of Germany. He is best known for his opposition to World War I in the Reichstag and his role in the Spartacist uprising of 1919...
- were shot by members of the 1st Horse Guards Division as they were being arrested after the fighting had ended on January 17. On the other hand, he defused the Kiel Mutiny of 1918 without a shot being fired.

Noske was Governor of the Province of Hanover
Province of Hanover
The Province of Hanover was a province of the Kingdom of Prussia and the Free State of Prussia from 1868 to 1946.During the Austro-Prussian War, the Kingdom of Hanover had attempted to maintain a neutral position, along with some other member states of the German Confederation...
from 1920 on, but was dismissed by the Nazi government in 1933. In 1944 he was arrested by the Gestapo
Gestapo
The Gestapo was the official secret police of Nazi Germany. Beginning on 20 April 1934, it was under the administration of the SS leader Heinrich Himmler in his position as Chief of German Police...
under suspicion of involvement in the July 20 plot
July 20 Plot
On 20 July 1944, an attempt was made to assassinate Adolf Hitler, Führer of the Third Reich, inside his Wolf's Lair field headquarters near Rastenburg, East Prussia. The plot was the culmination of the efforts of several groups in the German Resistance to overthrow the Nazi-led German government...
against Adolf Hitler
Adolf Hitler
Adolf Hitler was an Austrian-born German politician and the leader of the National Socialist German Workers Party , commonly referred to as the Nazi Party). He was Chancellor of Germany from 1933 to 1945, and head of state from 1934 to 1945...
. Noske was freed by advancing Allied troops and lived in Frankfurt am Main afterwards. He died while preparing for a lecture tour of the United States
United States
The United States of America is a federal constitutional republic comprising fifty states and a federal district...
.

SPD politician Johannes Kahrs
Johannes Kahrs (politician)
Johannes Kahrs is a German politician. He is a member of the Social Democratic Party of Germany.Kahrs' parents are Wolfgang and Bringfriede Kahrs, who were both senators in Bremen for Social Democratic Party of Germany. After his schooling in Bremen, Kahrs went in to the military and became an...
, a leading contemporary representative of the moderate wing of the SPD, has described Gustav Noske as one of his political role models.
The source of this article is wikipedia, the free encyclopedia.  The text of this article is licensed under the GFDL.