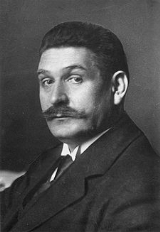 Born in Darkehmen (now Ozyorsk, Kaliningrad Oblast
Ozyorsk, Kaliningrad Oblast
Ozyorsk is a town and the administrative center of Ozyorsky District of Kaliningrad Oblast, Russia, located on the Angrapa River, southeast of Chernyakhovsk near the border with the Polish Warmia-Masuria Voivodship. Population: -Notable residents:...
) near Königsberg
Königsberg
Königsberg was the capital of East Prussia from the Late Middle Ages until 1945 as well as the northernmost and easternmost German city with 286,666 inhabitants . Due to the multicultural society in and around the city, there are several local names for it...
in East Prussia
East Prussia
East Prussia is the main part of the region of Prussia along the southeastern Baltic Coast from the 13th century to the end of World War II in May 1945. From 1772–1829 and 1878–1945, the Province of East Prussia was part of the German state of Prussia. The capital city was Königsberg.East Prussia...
, Bauer, who rose to notice through his leadership of a white-collar trade union, served from 1908 to 1918 as chairman of the General Commission of Trade Unions for all of Germany. A member of the Reichstag
Reichstag (German Empire)
The Reichstag was the parliament of the North German Confederation , and of the German Reich ....
, Bauer entered Prince Max of Baden's
Prince Maximilian of Baden
Maximilian of Baden was a German prince and politician...
government in October 1918 as Minister of Labour, a role which he continued to hold in the government of Philipp Scheidemann
Philipp Scheidemann
Philipp Scheidemann was a German Social Democratic politician, who proclaimed the Republic on 9 November 1918, and who became the second Chancellor of the Weimar Republic....
after the war. When Scheidemann resigned in June 1919 to protest the Treaty of Versailles
Treaty of Versailles
The Treaty of Versailles was one of the peace treaties at the end of World War I. It ended the state of war between Germany and the Allied Powers. It was signed on 28 June 1919, exactly five years after the assassination of Archduke Franz Ferdinand. The other Central Powers on the German side of...
, Bauer became Chancellor, serving until March 1920, when he resigned shortly after the failure of the Kapp Putsch
Kapp Putsch
The Kapp Putsch — or more accurately the Kapp-Lüttwitz Putsch — was a 1920 coup attempt during the German Revolution of 1918–1919 aimed at overthrowing the Weimar Republic...
.

Bauer resigned from the Social Democratic Party and the Reichstag in disgrace in February 1925, after it appeared that he had accepted improper payments in the Barmat Scandal
Barmat Scandal
The Barmat Scandal in 1924 and 1925 in Weimar Republic implicated the Social Democratic Party of Germany in Germany in charges of corruption, war profiteering, fraud, bribery and financial misdeeds. The scandal provided right-wing political forces within Germany with a basis with which to attack...
and then lied about it, but was reinstated in 1926.