Encyclopedia
Philip Henry Kerr, 11th Marquess of Lothian KT
Order of the Thistle
The Most Ancient and Most Noble Order of the Thistle is an order of chivalry associated with Scotland. The current version of the Order was founded in 1687 by King James VII of Scotland who asserted that he was reviving an earlier Order...
CH
Order of the Companions of Honour
The Order of the Companions of Honour is an order of the Commonwealth realms. It was founded by King George V in June 1917, as a reward for outstanding achievements in the arts, literature, music, science, politics, industry or religion....
PC
Privy Council of the United Kingdom
Her Majesty's Most Honourable Privy Council, usually known simply as the Privy Council, is a formal body of advisers to the Sovereign in the United Kingdom...
(1882–1940) was a British politician and diplomat.

Philip Kerr was the son of Lord Ralph Drury Kerr, the third son of John Kerr, 7th Marquess of Lothian
John Kerr, 7th Marquess of Lothian
John William Robert Kerr, 7th Marquess of Lothian PC , styled Lord Newbottle until 1815 and Earl of Ancram from 1815 to 1824, was a Scottish Tory politician...
. He was born in London
London
London is the capital city of :England and the :United Kingdom, the largest metropolitan area in the United Kingdom, and the largest urban zone in the European Union by most measures. Located on the River Thames, London has been a major settlement for two millennia, its history going back to its...
and educated at the The Oratory School
The Oratory School
The Oratory School is a Roman Catholic, independent school for boys in Woodcote, Berkshire. It is the last Catholic all-boys boarding school remaining in Great Britain. It has approximately 420 pupils...
and New College, Oxford
New College, Oxford
New College is one of the constituent colleges of the University of Oxford in the United Kingdom.- Overview :The College's official name, College of St Mary, is the same as that of the older Oriel College; hence, it has been referred to as the "New College of St Mary", and is now almost always...
. 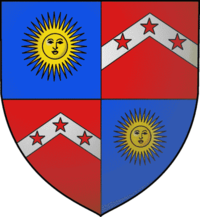 He served in the South African government from 1905–10 after which he returned to the United Kingdom to found and edit the Round Table Journal
The Round Table Journal
The Round Table: The Commonwealth Journal of International Affairs is a policy matters journal relating to the Commonwealth of Nations.-History:...
. In 1916, he was appointed David Lloyd George
David Lloyd George
David Lloyd George, 1st Earl Lloyd-George of Dwyfor OM, PC was a British Liberal politician and statesman...
's private secretary and was active in the Paris Peace Conference
Paris Peace Conference, 1919
The Paris Peace Conference was the meeting of the Allied victors following the end of World War I to set the peace terms for the defeated Central Powers following the armistices of 1918. It took place in Paris in 1919 and involved diplomats from more than 32 countries and nationalities...
. For these services he was appointed a Member of the Order of the Companions of Honour
Order of the Companions of Honour
The Order of the Companions of Honour is an order of the Commonwealth realms. It was founded by King George V in June 1917, as a reward for outstanding achievements in the arts, literature, music, science, politics, industry or religion....
(CH) in March 1920.

He was a member of what was called "Milner's Kindergarten
Milner's Kindergarten
Milner's Kindergarten is an informal reference to a group of Britons who served in the South African Civil Service under High Commissioner Alfred, Lord Milner, between the Second Boer War and the founding of the Union of South Africa. They were in favour of the South African union and, ultimately,...
". This was more a group of colonial officers who deemed themselves reformist than an actual political faction. They believed the colonies should have more say in the Commonwealth
Commonwealth of Nations
The Commonwealth of Nations, normally referred to as the Commonwealth and formerly known as the British Commonwealth, is an intergovernmental organisation of fifty-four independent member states...
. In the terms of the era they were liberal, but in modern terms they might be deemed right wing as most of them only had interest in elevating the status of white colonials, rejected independence, and had a paternalistic view of non-whites. Philip Kerr became more liberal on these issues than them, admiring Mohandas Gandhi and trying, if not entirely succeeding, to be more progressive than them on racial issues.

He came from an aristocratic family who were staunch members of the Roman Catholic Church
Roman Catholic Church
The Catholic Church, also known as the Roman Catholic Church, is the world's largest Christian church, with over a billion members. Led by the Pope, it defines its mission as spreading the gospel of Jesus Christ, administering the sacraments and exercising charity...
. He himself considered becoming a priest or monastic at times, but in adulthood he became disillusioned with the faith. His close friendship to Nancy Astor led to their both converting to the Church of Christ, Scientist
Church of Christ, Scientist
The Church of Christ, Scientist was founded in 1879 in Boston, Massachusetts, USA, by Mary Baker Eddy. She was the author of the book Science and Health with Key to the Scriptures. Christian Science teaches that the "allness" of God denies the reality of sin, sickness, death, and the material world...
together. The reaction of his family to this eventually led to his support of Anti-Catholicism
Anti-Catholicism
Anti-Catholicism is a generic term for discrimination, hostility or prejudice directed against Catholicism, and especially against the Catholic Church, its clergy or its adherents...
. A confirmed bachelor having never been romantically linked with any female, he left no heirs and the marquessate was inherited by his first cousin, Peter Kerr.

Lord Lothian was best known in the United States for having aided Washington Post owner Eugene Meyer
Eugene Meyer
Eugene Isaac Meyer was an American financier, public official, publisher of the Washington Post newspaper. He served as Chairman of the Federal Reserve from 1930 to 1933. He was the father of publisher Katharine Graham.-Biography:Born in Los Angeles, California, he was one of eight children of...
scoop the world on reporting Britain's King Edward VIII
Edward VIII of the United Kingdom
Edward VIII was King of the United Kingdom and the Dominions of the British Commonwealth, and Emperor of India, from 20 January to 11 December 1936.Before his accession to the throne, Edward was Prince of Wales and Duke of Cornwall and Rothesay...
's relationship with Wallis Simpson, eventually leading to Edward's abdication
Edward VIII abdication crisis
In 1936, a constitutional crisis in the British Empire was caused by King-Emperor Edward VIII's proposal to marry Wallis Simpson, a twice-divorced American socialite....
of the crown.

Speaking on 24 June 1933, at Gresham's School
Gresham's School
Gresham’s School is an independent coeducational boarding school in Holt in North Norfolk, England, a member of the HMC.The school was founded in 1555 by Sir John Gresham as a free grammar school for forty boys, following King Henry VIII's dissolution of the Augustinian priory at Beeston Regis...
, he said "There probably never was a time of more uncertainty in the world than today. Every kind of political and economic philosophy is seeking approbation, and there is every kind of uncertainty about social and personal habits."

He was later British Ambassador to the United States of America, from 1939 to 1940. He felt initial sympathy for Germany over the Treaty of Versailles
Treaty of Versailles
The Treaty of Versailles was one of the peace treaties at the end of World War I. It ended the state of war between Germany and the Allied Powers. It was signed on 28 June 1919, exactly five years after the assassination of Archduke Franz Ferdinand. The other Central Powers on the German side of...
and so at first he favoured appeasement, stating that in 1936, just after Germany reclaimed the Rhineland that it was nothing more than the Germans walking into their own back yard, however he later abandoned the idea after the Munich crisis. Devoted to the very end to the religion to which he had converted, he died having refused medical treatment as a Christian Scientist.