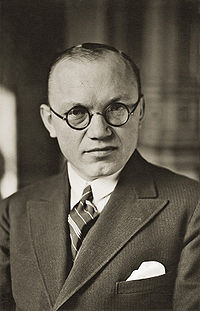 Klimas attended law school at the University of Moscow. After graduating, he returned to Vilnius
Vilnius
Vilnius is the capital of Lithuania, and its largest city, with a population of 560,190 as of 2010. It is the seat of the Vilnius city municipality and of the Vilnius district municipality. It is also the capital of Vilnius County...
and served on the Lithuanian Central Relief Committee. He was elected to the Council of Lithuania
Council of Lithuania
The Council of Lithuania , after July 11, 1918 The State Council of Lithuania , was convened at the Vilnius Conference that took place between September 18 and 23, 1917. The council was granted the executive authority of the Lithuanian people and was entrusted to establish an independent...
in 1917, and signed the Act of Independence in 1918. Klimas went on to serve as the Lithuanian diplomatic envoy to France
France
The French Republic , The French Republic , The French Republic , (commonly known as France , is a unitary semi-presidential republic in Western Europe with several overseas territories and islands located on other continents and in the Indian, Pacific, and Atlantic oceans. Metropolitan France...
, Belgium
Belgium
Belgium , officially the Kingdom of Belgium, is a federal state in Western Europe. It is a founding member of the European Union and hosts the EU's headquarters, and those of several other major international organisations such as NATO.Belgium is also a member of, or affiliated to, many...
, Spain
Spain
Spain , officially the Kingdom of Spain languages]] under the European Charter for Regional or Minority Languages. In each of these, Spain's official name is as follows:;;;;;;), is a country and member state of the European Union located in southwestern Europe on the Iberian Peninsula...
, Portugal
Portugal
Portugal , officially the Portuguese Republic is a country situated in southwestern Europe on the Iberian Peninsula. Portugal is the westernmost country of Europe, and is bordered by the Atlantic Ocean to the West and South and by Spain to the North and East. The Atlantic archipelagos of the...
, and Luxembourg
Luxembourg
Luxembourg , officially the Grand Duchy of Luxembourg , is a landlocked country in western Europe, bordered by Belgium, France, and Germany. It has two principal regions: the Oesling in the North as part of the Ardennes massif, and the Gutland in the south...
.

During the Interwar period
Interwar period
Interwar period can refer to any period between two wars. The Interbellum is understood to be the period between the end of the Great War or First World War and the beginning of the Second World War in Europe....
Klimas published a number of scholarly works in Lithuanian and German language, including Russisch Litauen (Russian Lithuania), a study of Russian rule of Lithuania from 1795–1915; Der Werdegang des litauischen Staates (The Development of the Lithuanian State), describing the emergence of the Lithuanian state from 1915–1918; and Lietuvos žemės valdymo istorija (History of land ownership in Lithuania).

While he was serving on a diplomatic mission to Paris
Paris
Paris is the capital and largest city in France, situated on the river Seine, in northern France, at the heart of the Île-de-France region...
in 1940, the Lithuanian Legation was turned over to the Soviet Union
Soviet Union
The Soviet Union , officially the Union of Soviet Socialist Republics , was a constitutionally socialist state that existed in Eurasia between 1922 and 1991....
. The Nazi occupational authorities in France arrested him in 1942, and he was sent to a concentration camp until 1943. He was released for a short while and returned to Lithuania, but was re-arrested in 1944 during the second Soviet occupation of Lithuania. This time he was sent to a concentration camp in Siberia and spent ten years there. His health was permanently impaired until his death in 1969. He was buried in Petrašiūnai Cemetery
Petrašiunai Cemetery
Petrašiūnai Cemetery is Lithuania's premiere last resting place formally designated for graves of people influential in national history, politics, arts, and science.- Location :...
.
The source of this article is wikipedia, the free encyclopedia.  The text of this article is licensed under the GFDL.