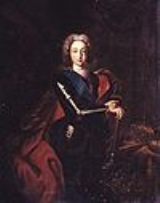 Encyclopedia
Pyotr II Alekseyevich (Russian: Пётр II Алексеевич or Pyotr II Alekseyevich) ( – ) was Emperor
Emperor
An emperor is a monarch, usually the sovereign ruler of an empire or another type of imperial realm. Empress, the female equivalent, may indicate an emperor's wife or a woman who rules in her own right...
of Russia from 1727 until his death. He was the only son of Tsarevich Alexei Petrovich, son of Peter I of Russia
Peter I of Russia
Peter the Great, Peter I or Pyotr Alexeyevich Romanov Dates indicated by the letters "O.S." are Old Style. All other dates in this article are New Style. ruled the Tsardom of Russia and later the Russian Empire from until his death, jointly ruling before 1696 with his half-brother, Ivan V...
by his first wife
Queen consort
A queen consort is the wife of a reigning king. A queen consort usually shares her husband's rank and holds the feminine equivalent of the king's monarchical titles. Historically, queens consort do not share the king regnant's political and military powers. Most queens in history were queens consort...
Eudoxia Lopukhina
Eudoxia Lopukhina
Tsarina Evdokiya Feodorovna Lopukhina was the first wife of Peter I of Russia. They married in 1689 but divorced in 1698...
, and Princess Charlotte, daughter of Duke Louis Rudolph of Brunswick-Lüneburg
Louis Rudolph, Duke of Brunswick-Lüneburg
Louis Rudolph, Duke of Brunswick-Lüneburg ruled over the Wolfenbüttel subdivision of the duchy from 1731 until his death....
and sister-in-law of Charles VI, Holy Roman Emperor
Charles VI, Holy Roman Emperor
Charles VI was the penultimate Habsburg sovereign of the Habsburg Empire. He succeeded his elder brother, Joseph I, as Holy Roman Emperor, King of Bohemia , Hungary and Croatia , Archduke of Austria, etc., in 1711...
. He was also the only male-line grandson of Peter the Great.

Peter was born in Saint Petersburg
Saint Petersburg
Saint Petersburg is a city and a federal subject of Russia located on the Neva River at the head of the Gulf of Finland on the Baltic Sea...
on 23 October 1715 (Julian calendar
Julian calendar
The Julian calendar began in 45 BC as a reform of the Roman calendar by Julius Caesar. It was chosen after consultation with the astronomer Sosigenes of Alexandria and was probably designed to approximate the tropical year .The Julian calendar has a regular year of 365 days divided into 12 months...
). From his childhood the orphan grand duke was kept in the strictest seclusion. His grandfather, Peter the Great, systematically ignored him. His earliest governesses were the wives of a tailor and a vintner from the Dutch settlement; a sailor called Norman taught him the rudiments of navigation; and, when he grew older, he was placed under the care of a Hungarian refugee, Janos Zeikin, who seems to have been a conscientious teacher.

During the reign of Catherine I
Catherine I of Russia
Catherine I , the second wife of Peter the Great, reigned as Empress of Russia from 1725 until her death.-Life as a peasant woman:The life of Catherine I was said by Voltaire to be nearly as extraordinary as that of Peter the Great himself. There are no documents that confirm her origins. Born on...
, Peter was quite ignored; but just before her death it became clear to those in power that the grandson of Peter the Great could not be kept out of his inheritance much longer. The majority of the nation and three-quarters of the nobility were on his side, while his uncle, Emperor Charles VI
Charles VI, Holy Roman Emperor
Charles VI was the penultimate Habsburg sovereign of the Habsburg Empire. He succeeded his elder brother, Joseph I, as Holy Roman Emperor, King of Bohemia , Hungary and Croatia , Archduke of Austria, etc., in 1711...
, through the imperial ambassador at Saint Petersburg
Saint Petersburg
Saint Petersburg is a city and a federal subject of Russia located on the Neva River at the head of the Gulf of Finland on the Baltic Sea...
, persistently urged his claims. The matter was arranged between Aleksandr Danilovich Menshikov
Aleksandr Danilovich Menshikov
Aleksandr Danilovich Menshikov was a Russian statesman, whose official titles included Generalissimus, Prince of the Russian Empire and Duke of Izhora , Prince of the Holy Roman Empire, Duke of Cosel. A highly appreciated associate and friend of Tsar Peter the Great, he was the de facto ruler of...
and Count Andrei Osterman
Andrei Osterman
Count Andrey Ivanovich Osterman was a German-born Russian statesman who came to prominence under Tsar Peter I of Russia and served until the accession of the Tsesarevna Elizabeth. His foreign policy was based upon the Austrian alliance...
; and on 18 May 1727 Peter II, according to the terms of the forged last will of Catherine I, was proclaimed emperor.

Peter tightened Serfdom by banning them from volunteering for military service and thus escaping serfdom.

The senate, the privy council
Privy council
A privy council is a body that advises the head of state of a nation, typically, but not always, in the context of a monarchic government. The word "privy" means "private" or "secret"; thus, a privy council was originally a committee of the monarch's closest advisors to give confidential advice on...
and the guards took the oath of allegiance
Oath of allegiance
An oath of allegiance is an oath whereby a subject or citizen acknowledges a duty of allegiance and swears loyalty to monarch or country. In republics, modern oaths specify allegiance to the country's constitution. For example, officials in the United States, a republic, take an oath of office that...
forthwith. The education of the young prince was wisely entrusted to the vice-chancellor Ostermann. Menshikov, who took possession of Peter II and lodged him in his own palace on the Vasilievsky Island
Vasilievsky Island
Vasilyevsky Island is an island in Saint Petersburg, Russia, bordered by the rivers Bolshaya Neva and Malaya Neva in the south and northeast, and by the Gulf of Finland in the west. Vasilyevsky Island is separated from Dekabristov Island by the Smolenka River...
, had intended to marry Peter to his daughter Maria. For a few months in the summer of 1727,"Not even Peter the Great was so feared or so obeyed" according to the Saxon ambassador. Menshikov became arrogant and domineering. He issued orders to the Emperor himself and then removed a silver plate that Peter had just given as a gift to his sister Natalya. To which the Emperor replied, "we shall see who is emperor, you or I." Then after Menshikov had recovered from a brief illness, Peter turned his back on him and said, "You see, I am at last learning how to keep him in order." Soon, Menshikov was arrested (21 September 1727); but Peter only fell into the hands of the equally unscrupulous Prince Vasily Lukich Dolgorukov
Vasily Lukich Dolgorukov
Prince Vasiliy Lukich Dolgorukov was a Russian diplomat and minister who was the most powerful man in the country in the later years of Peter II's reign....
, who carried him away from Petersburg to Moscow. Peter's coronation was celebrated at that city on 25 February 1728. He was betrothed to his mentor's niece, Princess Catherine Dolgorukova
Ekaterina Alekseyevna Dolgorukova
Ekaterina Alekseyevna Dolgorukova was a Russian noble, enganged to tsar Peter II of Russia.Daughter of the Russian Prince Alexei Dolgorukov and niece to Prince Vasily Lukich Dolgorukov. She grew up with her brother Ivan in Warsaw in the house of her grandfather Gregory Fjodorovitj. Reportedly, she...
, and the wedding was actually fixed for 30 January 1730; but on that very day the emperor died of smallpox.

He is buried in the Kremlin
Kremlin
A kremlin , same root as in kremen is a major fortified central complex found in historic Russian cities. This word is often used to refer to the best-known one, the Moscow Kremlin, or metonymically to the government that is based there...
, the only post-Petrine Russian monarch given that honor. In fact, with Ivan VI (who was murdered and buried in the fortress of Shlisselburg
Shlisselburg
Shlisselburg is a town in Leningrad Oblast, Russia, situated at the head of the Neva River on Lake Ladoga, east of St. Petersburg. From 1944 to 1992, it was known as Petrokrepost...
), he is the only post-Petrine monarch not buried in the Peter and Paul Cathedral
Peter and Paul Cathedral
The Peter and Paul Cathedral is a Russian Orthodox cathedral located inside the Peter and Paul Fortress in St. Petersburg, Russia. It is the first and oldest landmark in St. Petersburg, built between 1712 and 1733 on Zayachy Island along the Neva River. Both the cathedral and the fortress were...
in Saint Petersburg.

With Peter's death, the direct male line of the Romanov
Romanov
The House of Romanov was the second and last imperial dynasty to rule over Russia, reigning from 1613 until the February Revolution abolished the crown in 1917...
Dynasty
Dynasty
A dynasty is a sequence of rulers considered members of the same family. Historians traditionally consider many sovereign states' history within a framework of successive dynasties, e.g., China, Ancient Egypt and the Persian Empire...
ended. He was succeeded by Anna Ivanovna, daughter of Peter the Great's half-brother and co-ruler, Ivan V
Ivan V of Russia
Ivan V Alekseyevich Romanov was a joint Tsar of Russia who co-reigned between 1682 and 1696. He was the youngest son of Alexis I of Russia and Maria Miloslavskaya. His reign was only formal, since he had serious physical and mental disabilities...
.