Menshikov was born on in Moscow
Moscow
Moscow is the capital, the most populous city, and the most populous federal subject of Russia. The city is a major political, economic, cultural, scientific, religious, financial, educational, and transportation centre of Russia and the continent...
. It has been disputed by his enemies whether his father was a stablehand or worked on a barge; it's more likely that he was of petty noble stock. As the story goes, he was making a living on the streets of Moscow as a vendor of stuffed buns known as pirozhki at the age of twenty. His fine appearance and witty character caught the attention of Franz Lefort
Franz Lefort
Franz Lefort was a Russian military figure of Swiss origin, general admiral , and close associate of Peter the Great....
, Peter's first favorite, who took him into his service and finally transferred him to the tsar. On the death of Lefort in 1699, Menshikov succeeded him as Peter's prime favorite and confidant.

He took an active part in the Azov campaigns
Azov campaigns
Azov campaigns of 1695–96 , two Russian military campaigns during the Russo-Turkish War of 1686–1700, led by Peter the Great and aimed at capturing the Turkish fortress of Azov , which had been blocking Russia's access to the Azov Sea and the Black Sea...
(1695–1696) against the Ottoman Empire. During the tsar's first foreign tour in the next year, Menshikov worked by his side in the dockyard of Amsterdam
Amsterdam
Amsterdam is the largest city and the capital of the Netherlands. The current position of Amsterdam as capital city of the Kingdom of the Netherlands is governed by the constitution of August 24, 1815 and its successors. Amsterdam has a population of 783,364 within city limits, an urban population...
, and acquired a thorough knowledge of shipbuilding and colloquial Dutch
Dutch language
Dutch is a West Germanic language and the native language of the majority of the population of the Netherlands, Belgium, and Suriname, the three member states of the Dutch Language Union. Most speakers live in the European Union, where it is a first language for about 23 million and a second...
and German
German language
German is a West Germanic language, related to and classified alongside English and Dutch. With an estimated 90 – 98 million native speakers, German is one of the world's major languages and is the most widely-spoken first language in the European Union....
. He acted as subordinate to Boris Sheremetev, who was commander-in-chief during the retreat before Charles XII
Charles XII of Sweden
Charles XII also Carl of Sweden, , Latinized to Carolus Rex, Turkish: Demirbaş Şarl, also known as Charles the Habitué was the King of the Swedish Empire from 1697 to 1718...
in 1708, subsequently participating in the battle of Holowczyn
Battle of Holowczyn
The Battle of Holowczyn or Golovchin was fought between the Russian army, led by Field Marshal Boris Sheremetyev, and the Swedish army, led by Charles XII of Sweden, only 26 years of age at the time. Despite difficult natural obstacles and superior enemy artillery, the Swedes were able to achieve...
, the reduction of Mazepa
Ivan Mazepa
Ivan Stepanovych Mazepa , Cossack Hetman of the Hetmanate in Left-bank Ukraine, from 1687–1708. He was famous as a patron of the arts, and also played an important role in the Battle of Poltava where after learning of Peter I's intent to relieve him as acting Hetman of Ukraine and replace him...
, and the crowning victory of Poltava
Battle of Poltava
The Battle of Poltava on 27 June 1709 was the decisive victory of Peter I of Russia over the Swedish forces under Field Marshal Carl Gustav Rehnskiöld in one of the battles of the Great Northern War. It is widely believed to have been the beginning of Sweden's decline as a Great Power; the...
, where he won his field-marshal's baton.

From 1709 to 1714 he served during the Courland
Courland
Courland is one of the historical and cultural regions of Latvia. The regions of Semigallia and Selonia are sometimes considered as part of Courland.- Geography and climate :...
, Holstein
Holstein
Holstein is the region between the rivers Elbe and Eider. It is part of Schleswig-Holstein, the northernmost state of Germany....
and Pomerania
Pomerania
Pomerania is a historical region on the south shore of the Baltic Sea. Divided between Germany and Poland, it stretches roughly from the Recknitz River near Stralsund in the West, via the Oder River delta near Szczecin, to the mouth of the Vistula River near Gdańsk in the East...
n campaigns, but then, as governor-general of Ingria
Ingria
Ingria is a historical region in the eastern Baltic, now part of Russia, comprising the southern bank of the river Neva, between the Gulf of Finland, the Narva River, Lake Peipus in the west, and Lake Ladoga and the western bank of the Volkhov river in the east...
, with almost unlimited powers, was entrusted with a leading part in the civil administration. Menshikov understood perfectly the principles on which Peter's reforms were conducted and was the right hand of the tsar in all his gigantic undertakings. But he abused his powerful position, and his corrupt practices frequently brought him to the verge of ruin. Every time the tsar returned to Russia he received fresh accusations of plunder against "his Serene Highness
Serene Highness
His/Her Serene Highness is a style used today by the reigning families of Liechtenstein and Monaco. It also preceded the princely titles of members of some German ruling and mediatised dynasties as well as some non-ruling but princely German noble families until 1918...
."

Peter's first serious outburst of indignation (March 1711) was due to the prince's looting in Poland
Poland
Poland , officially the Republic of Poland , is a country in Central Europe bordered by Germany to the west; the Czech Republic and Slovakia to the south; Ukraine, Belarus and Lithuania to the east; and the Baltic Sea and Kaliningrad Oblast, a Russian exclave, to the north...
. On his return to Russia in 1712, Peter discovered that Menshikov had turned a blind eye to wholesale corruption in his own governor-generalship. Peter warned him "for the last time" to change his ways. Yet, in 1713, he was implicated in the famous Solov'ey process, in the course of which it was demonstrated that he had defrauded the government of 100,000 roubles. He only owed his life on this occasion to a sudden illness. On his recovery Peter's fondness for his friend overcame his sense of justice.

In the last year of Peter's reign new allegations of fraud by Menshikov came to light, and he was obliged to appeal for protection to the empress Catherine
Catherine I of Russia
Catherine I , the second wife of Peter the Great, reigned as Empress of Russia from 1725 until her death.-Life as a peasant woman:The life of Catherine I was said by Voltaire to be nearly as extraordinary as that of Peter the Great himself. There are no documents that confirm her origins. Born on...
. It was chiefly through the efforts of Menshikov and his colleague Tolstoi that, on the death of Peter, in 1725, Catherine was raised to the throne. Menshikov was committed to the Petrine system, and he recognized that, if that system were to continue, Catherine was, at that particular time, the only possible candidate. Her name was a watchword for the progressive faction. The placing of her on the throne meant a final victory over ancient prejudices, a vindication of the new ideas of progress, and not least security for Menshikov and his ill-gotten fortune. 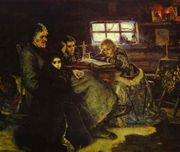 During Catherine's short reign (February 1725 – May 1727), Menshikov was practically the absolute ruler of Russia. He promoted himself to the unprecedented rank of Generalissimus, and was the only Russian to bear a ducal title. Upon finishing the construction of the Menshikov Palace
Menshikov Palace
The Menshikov Palace is a Petrine Baroque edifice in Saint Petersburg, situated on Universitetskaya Embankment of the Bolshaya Neva on Vasilyevsky Island. It was the first stone building in the city...
on the Neva Embankment in St Petersburg (now assigned to the Hermitage Museum
Hermitage Museum
The State Hermitage is a museum of art and culture in Saint Petersburg, Russia. One of the largest and oldest museums of the world, it was founded in 1764 by Catherine the Great and has been opened to the public since 1852. Its collections, of which only a small part is on permanent display,...
), Menshikov intended to make Oranienbaum
Oranienbaum, Russia
Oranienbaum is a Russian royal residence, located on the Gulf of Finland west of St. Petersburg. The Palace ensemble and the city centre are UNESCO World Heritage Sites.-History:...
a capital of his ephemeral duchy
Duchy
A duchy is a territory, fief, or domain ruled by a duke or duchess.Some duchies were sovereign in areas that would become unified realms only during the Modern era . In contrast, others were subordinate districts of those kingdoms that unified either partially or completely during the Medieval era...
. Pushkin in one of his poems alluded to Menshikov as "half-tsar".

He now aimed at establishing himself definitely by marrying his daughter Mary to Peter II. But the old nobility
Rurik Dynasty
The Rurik dynasty or Rurikids was a dynasty founded by the Varangian prince Rurik, who established himself in Novgorod around the year 862 AD...
, represented by the Dolgorukov
Dolgorukov
Dolgoroukov is the name of a princely Russian family Dolgorukovs of Rurikid stock. Descendants of Mikhail of Chernigov, they took their name from one prince of Obolensk, whose sobriquet was Dolgorouky, or "Long-Armed" in Russian, alluding their lineage to the ancient Persian monarchy. Among its...
s and the Galitzine
Galitzine
For Orthodox clergyman and theologian, see Alexander Golitzin.The Galitzines are one of the largest and noblest princely houses of Russia. Since the extinction of the Korecki family in the 17th century, the Golitsyns have claimed dynastic seniority in the House of Gediminas...
s, united to overthrow him, and he was deprived of all his dignities and offices and expelled from the capital . Subsequently he was deprived of his enormous wealth, stripped of the titles, and he and his whole family were banished to Berezov
Beryozovo
Beryozovo is an urban locality and the administrative center of Beryozovsky District of Khanty–Mansi Autonomous Okrug, Russia, located on the Ob River. Population:...
in Siberia
Siberia
Siberia is an extensive region constituting almost all of Northern Asia. Comprising the central and eastern portion of the Russian Federation, it was part of the Soviet Union from its beginning, as its predecessor states, the Tsardom of Russia and the Russian Empire, conquered it during the 16th...
, where he died on .

In Beryozovo Menshikov (with his own hands!) built a wooden church. He buried his daughter who died in exile there.