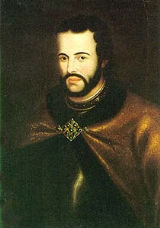 Encyclopedia
Ivan V Alekseyevich Romanov (Russian
Russian language
Russian is a Slavic language used primarily in Russia, Belarus, Uzbekistan, Kazakhstan, Tajikistan and Kyrgyzstan. It is an unofficial but widely spoken language in Ukraine, Moldova, Latvia, Turkmenistan and Estonia and, to a lesser extent, the other countries that were once constituent republics...
: Иван V Алексеевич, — ) was a joint Tsar
Tsar
Tsar is a title used to designate certain European Slavic monarchs or supreme rulers. As a system of government in the Tsardom of Russia and Russian Empire, it is known as Tsarist autocracy, or Tsarism...
of Russia
Russia
Russia or , officially known as both Russia and the Russian Federation , is a country in northern Eurasia. It is a federal semi-presidential republic, comprising 83 federal subjects...
(with his younger half-brother Peter I
Peter I of Russia
Peter the Great, Peter I or Pyotr Alexeyevich Romanov Dates indicated by the letters "O.S." are Old Style. All other dates in this article are New Style. ruled the Tsardom of Russia and later the Russian Empire from until his death, jointly ruling before 1696 with his half-brother, Ivan V...
) who co-reigned between 1682 and 1696. He was the youngest son of Alexis I of Russia
Alexis I of Russia
Aleksey Mikhailovich Romanov was the Tsar of Russia during some of the most eventful decades of the mid-17th century...
and Maria Miloslavskaya
Maria Miloslavskaya
Maria Ilyinichna Miloslavskaya was the first wife of tsar Alexis of Russia and mother of the tsars Feodor III of Russia and Ivan V of Russia, as well as regent princess Sophia Alekseyevna.-Biography:...
. His reign was only formal, since he had serious physical
Physical disability
A physical disability is any impairment which limits the physical function of one or more limbs or fine or gross motor ability. Other physical disabilities include impairments which limit other facets of daily living, such as respiratory disorders and epilepsy....
and mental disabilities. He sat still for hours at a time and needed assistance in order to walk. 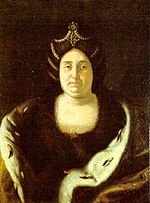 Ivan V was the 11th child of Tsar Alexis. As he was eye-sore and infirm, his capacity for supreme power was challenged by the party of the Naryshkins, who aspired to bring Natalia Naryshkina
Natalia Naryshkina
Natalya Kirillovna Naryshkina was the Tsaritsa of Russia from 1671 to 1676 as the second spouse of tsar Alexei I of Russia.-Biography:Coming from a petty noble family, daughter of Kirill Poluektovich Naryshkin and wife Anna Leontyevna Leontyeva Natalya Kirillovna Naryshkina was the Tsaritsa of...
's son, Peter I, to the throne. Upon the death of Feodor III of Russia
Feodor III of Russia
Feodor III Alexeevich of Russia was the Tsar of all Russia between 1676 and 1682....
in April 1682, their enemies insinuated that the Naryshkins had Ivan strangled, thus fomenting the Moscow Uprising of 1682
Moscow Uprising of 1682
Moscow Uprising of 1682, also known as Streltsy Uprising of 1682 , was an uprising of the Moscow Streltsy regiments which resulted in supreme power being devolved on Sophia Alekseyevna...
, which was put to an end only after Ivan was demonstrated by his relatives to the furious crowd.

Ivan had a very close relationship with his stepmother and half-brother/co-Tsar Peter. He did not really want to become Tsar but was persuaded to.

On 25 June the same year, Ivan and Peter were crowned in the Cathedral of the Dormition
Cathedral of the Dormition
The Cathedral of the Dormition is a Russian Orthodox church dedicated to the Dormition of the Theotokos. It is located on the north side of Cathedral Square of the Moscow Kremlin in Russia, where a narrow alley separates the north from the Patriarch's Palace with the Twelve Apostles Church....
as "dvoetsarstvenniki" (double tsars). A special throne with two seats was executed for the occasion (now on display in the Kremlin Armoury
Kremlin Armoury
The Kremlin Armory is one of the oldest museums of Moscow, established in 1808 and located in the Moscow Kremlin .The Kremlin Armoury originated as the royal arsenal in 1508. Until the transfer of the court to St Petersburg, the Armoury was in charge of producing, purchasing and storing weapons,...
). Although Ivan was considered the "senior tsar", actual power was wielded by his
elder sister, Sophia Alekseyevna
Sophia Alekseyevna
Sophia Alekseyevna was a regent of Russian Tsardom who allied herself with a singularly capable courtier and politician, Prince Vasily Galitzine, to install herself as a regent during the minority of her brothers, Peter the Great and Ivan V...
. In 1689, when she realized that power was slipping from her hands, she attempted to raise another riot, speculating that the Naryshkins had destroyed Ivan's crown and were poised to set his room on fire. However, Ivan's tutor, Prince Prozorovsky
Prozorovsky
Princes Prozorovsky were a Russian noble family of Rurikid stock descending from medieval rulers of Yaroslavl and Mologa. Their name is derived from the village of Prozorovo near Mologa, which used to be their only votchina in the 15th century...
, persuaded him to change sides, whereupon Ivan declared his allegiance to his brother's cause.

During the last decade of his life, Ivan was completely overshadowed by the more energetic Peter I. He spent his days with his wife, Praskovia Saltykova
Praskovia Saltykova
Praskovia Fyodorovna Saltykova was the tsaritsa of Russia as the only wife of Ivan V of Russia. She was the mother of Empress Anna of Russia...
, caring about little but "praying and fasting day and night". Ivan's purported debility did not prevent him from producing robust offspring in the shape of five daughters, one of whom — Anna Ivanovna — would assume the throne in 1730. His granddaughter through another child, Anna Leopoldovna would become a non-crowned ruler of Russia. Her son and Ivan's great-grandson, Ivan VI
Ivan VI of Russia
Ivan VI Antonovich of Russia , was proclaimed Emperor of Russia in 1740, as an infant, although he never actually reigned. Within less than a year, he was overthrown by the Empress Elizabeth of Russia, Peter the Great's daughter...
would be the last Russian emperor among the issue of Maria Miloslavskaya
Maria Miloslavskaya
Maria Ilyinichna Miloslavskaya was the first wife of tsar Alexis of Russia and mother of the tsars Feodor III of Russia and Ivan V of Russia, as well as regent princess Sophia Alekseyevna.-Biography:...
, the first wife of Tsar Alexis
Alexis I of Russia
Aleksey Mikhailovich Romanov was the Tsar of Russia during some of the most eventful decades of the mid-17th century...
. The last surviving offspring of Ivan V died in Denmark in 1807.

At the age of 27 he was described by foreign ambassadors as senile, paralytic and almost blind
Blindness
Blindness is the condition of lacking visual perception due to physiological or neurological factors.Various scales have been developed to describe the extent of vision loss and define blindness...
. He died two years later and was interred in the Archangel Cathedral.

For many years Ivan was treated like a puppet ruler of Muscovy. His largest ruling influence was his older sister Sophia. She vied for power along with Ivan and her half brother Peter, and is even blamed for the murders of Peter's mother and immediate family. Due to this and other situations tension arose between the two groups of Tsar Alexis' children. After Ivan's death on January 29, 1696 his half brother Peter I was left to become supreme ruler and Tsar of all of Russia. The struggle for power between the family had finally come to an end, and Peter was left to bring Russia into a new age.
The source of this article is wikipedia, the free encyclopedia.  The text of this article is licensed under the GFDL.