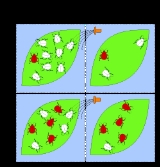 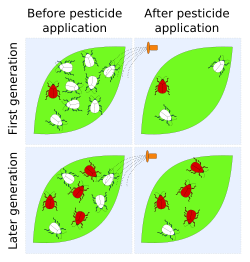 Pesticide resistance is the adaptation
Adaptation
An adaptation in biology is a trait with a current functional role in the life history of an organism that is maintained and evolved by means of natural selection. An adaptation refers to both the current state of being adapted and to the dynamic evolutionary process that leads to the adaptation....
of pest population targeted by a pesticide
Pesticide
Pesticides are substances or mixture of substances intended for preventing, destroying, repelling or mitigating any pest.A pesticide may be a chemical unicycle, biological agent , antimicrobial, disinfectant or device used against any pest...
resulting in decreased susceptibility to that chemical. In other words, pests develop a resistance to a chemical through natural selection
Natural selection
Natural selection is the nonrandom process by which biologic traits become either more or less common in a population as a function of differential reproduction of their bearers. It is a key mechanism of evolution....
: the most resistant organisms are the ones to survive and pass on their genetic
Genetics
Genetics , a discipline of biology, is the science of genes, heredity, and variation in living organisms....
traits to their offspring.

Manufacturers of pesticides tend to prefer a definition that is dependent on failure of a product in a real situation, sometimes called field resistance. For example, the Insecticide Resistance Action Committee (IRAC) definition of insecticide
Insecticide
An insecticide is a pesticide used against insects. They include ovicides and larvicides used against the eggs and larvae of insects respectively. Insecticides are used in agriculture, medicine, industry and the household. The use of insecticides is believed to be one of the major factors behind...
resistance is 'a heritable change in the sensitivity of a pest population that is reflected in the repeated failure of a product to achieve the expected level of control when used according to the label recommendation for that pest species'.

Pesticide resistance is increasing in occurrence. In the 1940s, farmers in the USA
United States
The United States of America is a federal constitutional republic comprising fifty states and a federal district...
lost 7% of their crops to pests, while since the 1980s, the percentage lost has increased to 13, even though more pesticides are being used. Over 500 species of pests have developed a resistance to a pesticide. Other sources estimate the number to be around 1000 species since 1945.

Propensity of pest populations to develop resistance is probably caused by a number of factors. First, pest species are usually capable of producing large number of offspring. This increases the probability of random mutations and ensures the rapid build-up in numbers of resistant mutants once such mutations have occurred. Secondly, pest species have been exposed to natural toxins for a long time before the onset of human civilization. For example, many plants produce phytotoxins to protect them from herbivores. As a result, coevolution of herbivores and their host plants required development of the physiological capability to detoxify or tolerate poisons. Thirdly, humans often rely almost exclusively on insecticides for pest control. This increases selection pressure towards resistance. Pesticides that fail to break down quickly and remain in the area contribute to selection for resistant organisms even after they are no longer being applied.

In response to pesticide resistance, pest managers may resort to increased use of pesticides, exacerbating the problem. In addition, when pesticides are toxic toward species that feed on or compete with pests, the pest population will likely expand further, requiring more pesticides. This is sometimes referred to as pesticide trap, or a pesticide treadmill, since farmers are continually paying more for less benefit.

Insect predators and parasites which live on other insects generally have smaller populations and are therefore much less likely to develop resistance than are the primary targets of the pesticides, such as mosquitoes and those that feed on plants. This can compound the pest problem because these species normally keep pest populations in check. But resistant predators of pest species can be bred in laboratories, which can help keep pest populations down.

The fewer sources of food a pest has the more likely it is to develop resistance, because it is exposed to higher concentrations of pesticides and has less opportunity to breed with populations that have not been exposed. Other factors in the speed with which a species develops resistance are generation time and fecundity
Fecundity
Fecundity, derived from the word fecund, generally refers to the ability to reproduce. In demography, fecundity is the potential reproductive capacity of an individual or population. In biology, the definition is more equivalent to fertility, or the actual reproductive rate of an organism or...
(shorter generations and more offspring lead to resistance more quickly).


Although resistance development is usually discussed as a result of pesticide use, it is important to keep in mind that pest populations can also adapt to non-chemical methods of control. For example, the northern corn rootworm (Diabrotica barberi) became adapted to a corn-soybean crop rotation by spending the year when field is planted to soybeans in a diapause.

Multiple resistance is the phenomenon in which a pest is resistant to more than one class of pesticides. This can happen if one pesticide is used until pests display a resistance and then another is used until they are resistant to that one, and so on. Cross resistance, a related phenomenon, occurs when the genetic mutation that made the pest resistant to one pesticide also makes it resistant to other pesticides, especially ones with similar mechanisms of action
Mechanism of action
In pharmacology, the term mechanism of action refers to the specific biochemical interaction through which a drug substance produces its pharmacological effect...
.

Frequently a pest becomes resistant to a pesticide because it develops physiological changes that protect it from the chemical. In some cases, a pest may gain an increased number of copies of a gene
Gene
A gene is a molecular unit of heredity of a living organism. It is a name given to some stretches of DNA and RNA that code for a type of protein or for an RNA chain that has a function in the organism. Living beings depend on genes, as they specify all proteins and functional RNA chains...
, allowing it to produce more of a protective enzyme
Enzyme
Enzymes are proteins that catalyze chemical reactions. In enzymatic reactions, the molecules at the beginning of the process, called substrates, are converted into different molecules, called products. Almost all chemical reactions in a biological cell need enzymes in order to occur at rates...
that breaks down the pesticide into less toxic chemicals. Such enzymes include esterase
Esterase
An esterase is a hydrolase enzyme that splits esters into an acid and an alcohol in a chemical reaction with water called hydrolysis.A wide range of different esterases exist that differ in their substrate specificity, their protein structure, and their biological function.- EC classification/list...
s, glutathione transferases, and mixed microsomal oxidases. Alternatively, the number of biochemical receptors for the chemicals may be reduced in the pest, or the receptor may be altered, reducing the pest's sensitivity to the compound. Behavioral resistance has also been described for some chemicals; for example, some Anopheles mosquitoes developed a preference for resting outside that prevented them from coming in contact with pesticide sprayed on interior walls. Still other mechanisms include increased rates of excretion of toxic molecules, their sequestration and storage inside of the insect body away from vulnerable tissues and organs, and decreased toxin penetration through the insect body wall.

Often, mutation in a single gene only leads to the development of a resistant organism. In other cases, multiple genes are involved. Resistant genes are usually autosomal. This means that they are located on autosomes (as opposed to sex chromosomes). As a result, resistance is inherited similarly in males and females. Also, resistance is usually inherited as an incompletely dominant trait. When a resistant and a susceptible individual mate with each other, their progeny has an intermediate level of resistance (more resistant than the susceptible parent, but not as resistant as the resistant parent).

Adaptation to pesticides usually decreases relative fitness of organisms in the absence of pesticides. Resistant individuals often have reduced reproductive output, life expectancy, mobility, etc. Therefore, relatively few of them persist in a population that is not exposed to a particular insecticide to which they have developed resistance.

Blowfly maggots produce an enzyme that confers resistance to organochloride insecticides. Scientists have researched ways to use this enzyme to break down pesticides in the environment, which would detoxify them and prevent harmful environmental effects. Later they discovered a similar enzyme produced by soil bacteria that also breaks down organochloride
Organochloride
An organochloride, organochlorine, chlorocarbon, chlorinated hydrocarbon, or chlorinated solvent is an organic compound containing at least one covalently bonded chlorine atom. Their wide structural variety and divergent chemical properties lead to a broad range of applications...
insecticides but which works faster and remains stable in a variety of conditions. The product, called Landguard is used in Australia to decontaminate spray equipment, soil and water after pesticide spraying and spills.

Pest resistance to a pesticide can be managed by reducing selection pressure by this pesticide on the pest population. In other words, the situation when all the pests except the most resistant ones are killed by a given chemical should be avoided. This can be achieved by avoiding unnecessary pesticide applications, using non-chemical control techniques, and leaving untreated refuges where susceptible pests can survive. Adopting the integrated pest management (IPM)
Integrated Pest Management
Integrated pest management is an ecological approach to agricultural pest control that integrates pesticides/herbicides into a management system incorporating a range of practices for economic control of a pest...
approach usually helps with resistance management.

When pesticides are the sole or predominant method of pest control, resistance is commonly managed through pesticide rotation. This involves alternating among pesticide classes with different modes of action to delay the onset of or mitigate existing pest resistance. Different pesticide classes may have different effects on a pest. The U.S. Environmental Protection Agency (EPA or USEPA) designates different classes of fungicides, herbicides and insecticides. Pesticide manufacturers may, on product labeling, require that no more than a specified number of consecutive applications of a pesticide class be made before alternating to a different pesticide class. This manufacturer requirement is intended to extend the useful life of a product.

Tankmixing pesticides is the combination of two or more pesticides with different modes of action in order to improve individual pesticide application results and delay the onset of or mitigate existing pest resistance.