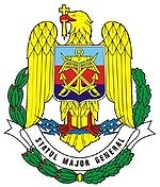 Encyclopedia
The Land Forces
Romanian Land Forces
The Romanian Land Forces is the army of Romania, and the main component of the Romanian Armed Forces. In recent years, full professionalisation and a major equipment overhaul have transformed the nature of the force.The Romanian Land Forces were founded on...
, Air Force
Romanian Air Force
The Romanian Air Force is the air force branch of the Romanian Armed Forces. It has an air force headquarters, an operational command, four air bases and an air defense brigade...
and Naval Forces
Romanian Naval Forces
The Romanian Navy is the navy branch of the Romanian Armed Forces; it operates in the Black Sea and on the Danube.-History:-Development of the Romanian Navy:The Romanian Navy has been founded in 1860 as a river flotilla on the Danube...
of Romania
Romania
Romania is a country located at the crossroads of Central and Southeastern Europe, on the Lower Danube, within and outside the Carpathian arch, bordering on the Black Sea...
are collectively known as the Romanian Armed Forces (Romanian: Forţele Armate Române or Armata Română) . The current Commander-in-chief
Commander-in-Chief
A commander-in-chief is the commander of a nation's military forces or significant element of those forces. In the latter case, the force element may be defined as those forces within a particular region or those forces which are associated by function. As a practical term it refers to the military...
is Major General
Major General
Major general or major-general is a military rank used in many countries. It is derived from the older rank of sergeant major general. A major general is a high-ranking officer, normally subordinate to the rank of lieutenant general and senior to the ranks of brigadier and brigadier general...
Ștefan Dănilă, managed by the Minister of National Defense, while the president
President of Romania
The President of Romania is the head of state of Romania. The President is directly elected by a two-round system for a five-year term . An individual may serve two terms...
is the Supreme Commander of the Armed Forces during wartime.

Total defence spending currently accounts for 2.05% of total national GDP
Gross domestic product
Gross domestic product refers to the market value of all final goods and services produced within a country in a given period. GDP per capita is often considered an indicator of a country's standard of living....
, which represents approximately 2.9 billion dollar
Dollar
The dollar is the name of the official currency of many countries, including Australia, Belize, Canada, Ecuador, El Salvador, Hong Kong, New Zealand, Singapore, Taiwan, and the United States.-Etymology:...
s (ranked 47th).

The Land Forces have overhauled their equipment in recent years, and are today a modern army
Army
An army An army An army (from Latin arma "arms, weapons" via Old French armée, "armed" (feminine), in the broadest sense, is the land-based military of a nation or state. It may also include other branches of the military such as the air force via means of aviation corps...
with multiple NATO capabilities. They are participating in a peacekeeping mission in Afghanistan
Afghanistan
Afghanistan , officially the Islamic Republic of Afghanistan, is a landlocked country located in the centre of Asia, forming South Asia, Central Asia and the Middle East. With a population of about 29 million, it has an area of , making it the 42nd most populous and 41st largest nation in the world...
, together with the other NATO countries. The Air Force currently operates modernized Soviet MiG-21 LanceR fighters, which are due to be replaced by new fighters by 2013, according to present plans, however due to poor funds and economy the plan may easily change. The Air Force has also ordered 7 new C-27J Spartan tactical airlift aircraft, in order to replace the bulk of the old transport force. Two modernized ex-Royal Navy
Royal Navy
The Royal Navy is the naval warfare service branch of the British Armed Forces. Founded in the 16th century, it is the oldest service branch and is known as the Senior Service...
Type 22 frigate
Type 22 frigate
The Type 22 Broadsword class is a class of frigate built for the British Royal Navy. Fourteen of the class were built in total, with production divided into three batches. With the decommissioning of HMS Cornwall on 30 June 2011, the final Type 22 of the Royal Navy was retired from service...
s were acquired by the Naval Forces in 2004 and a further four modern missile corvettes will be commissioned in the next few years. Three domestically-produced IAR 330 Puma NAVAL
IAR 330
|-See also:-External links:*...
helicopters were also ordered by the Naval Forces, and were commissioned in late 2008.

Romania
Romania
Romania is a country located at the crossroads of Central and Southeastern Europe, on the Lower Danube, within and outside the Carpathian arch, bordering on the Black Sea...
joined NATO in 2004. As a consequence, extensive preparations were made to abolish conscription by 2007 and create a professional army in place of a conscripted one.

The Romanian Military will essentially undergo a three-stage restructuring. As of 2007, the first short-term stage has been completed. 2015 marks the end of the second stage when the armed forces will reach a superior compatibility with NATO forces.. In 2025, the long-term stage is to be completed.
The stages aim at modernizing the structure of the armed forces, reducing the personnel as well as acquiring newer and more improved technology that is compatible with NATO standards.

Romanian troops participated in the occupation of Iraq, reaching a peak of 730 soldiers before being slowly drawn down to 350 soldiers. Romania terminated its mission in Iraq and withdrew its last troops on July 24, 2009.

Romania currently has troops deployed in Afghanistan
Afghanistan
Afghanistan , officially the Islamic Republic of Afghanistan, is a landlocked country located in the centre of Asia, forming South Asia, Central Asia and the Middle East. With a population of about 29 million, it has an area of , making it the 42nd most populous and 41st largest nation in the world...
, and is planning to nearly double its troop strength there to 1,800 by September 2010, according to an announcement made by President Traian Basescu in Prague on April 8, 2010. 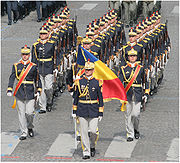 The following Romanian institutions have military status but are not part of the Armed Forces: