The Pentagon
The Pentagon
The Pentagon is the headquarters of the United States Department of Defense, located in Arlington County, Virginia. As a symbol of the U.S. military, "the Pentagon" is often used metonymically to refer to the Department of Defense rather than the building itself.Designed by the American architect...
has parking lots on both sides of nearby Shirley Memorial Highway (I-395
Interstate 395 (District of Columbia-Virginia)
Interstate 395 in Washington, D.C., and Virginia is a 13 mile long spur route that begins at a junction with Interstate 95 in Springfield, Virginia and ends in northwest Washington, D.C. It passes underneath the National Mall near the United States Capitol and ends at a junction with U.S...
), on the North edge of Pentagon City. The neighborhood of Crystal City
Crystal City, Virginia
Crystal City is an urban neighborhood in the southeastern corner of Arlington County, Virginia, south of downtown Washington, D.C.. Its residents can live, shop, and work without going outside, due to its extensive integration of office buildings and residential high-rise buildings using...
borders Pentagon City to the East along Jefferson Davis Highway
Jefferson Davis Highway
The Jefferson Davis Memorial Highway was a planned transcontinental highway in the United States in the 1910s and 1920s that began in Washington, D.C. and extended south and west to San Diego, California; it was named for Jefferson Davis, who, in addition to being the first and only President of...
(U.S. Route 1), separating Pentagon City from National Airport. To the South is the neighborhood of Aurora Highlands and the Virginia Highlands Park. To the West is the neighborhood of Arlington Ridge. Washington Boulevard
Washington Boulevard (Arlington)
Washington Boulevard is a road in Arlington County, Virginia. It begins as a highway, connecting the George Washington Memorial Parkway and Arlington Memorial Bridge with Interstate 395, running past The Pentagon and Arlington National Cemetery...
(State Route 27), Arlington Boulevard
Arlington Boulevard
Arlington Boulevard is a major arterial road in Arlington County, Fairfax County, and the independent City of Fairfax in Northern Virginia in metropolitan Washington, DC, United States. It is designated U.S...
(U.S. Route 50), Columbia Pike (State Route 244), and State Route 110 are nearby major thoroughfares.

The area was formerly known as "ReLee." The land was undeveloped through World War II. In the post-World War II era, the land was held by the Cafritz family pending future development, as empty fields and commercial warehouses. A Western Electric
Western Electric
Western Electric Company was an American electrical engineering company, the manufacturing arm of AT&T from 1881 to 1995. It was the scene of a number of technological innovations and also some seminal developments in industrial management...
telephone manufacturing facility occupied the structure now redeveloped as "Pentagon Centre." In the 1960s, high-rise apartment buildings were erected on Hayes, Fern, and Joyce Streets.

In the 1990s, MCI Communications
MCI Communications
MCI Communications Corp. was an American telecommunications company that was instrumental in legal and regulatory changes that led to the breakup of the AT&T monopoly of American telephony and ushered in the competitive long-distance telephone industry. It was headquartered in Washington,...
had a major presence in Pentagon City, with the company's Consumer Markets headquarters occupying Washington Tower, a 12-story office building that sits atop the Fashion Centre at Pentagon City. MCI also occupied two of the four office towers immediately across South Hayes Street, known as Pentagon City I & II (often abbreviated "PCY").

In 2003, the Virginia Baseball Stadium Authority proposed five Northern Virginia
Northern Virginia
Northern Virginia consists of several counties and independent cities in the Commonwealth of Virginia, in a widespread region generally radiating southerly and westward from Washington, D.C...
sites as possible locations to host the relocating Montréal Expos
Montreal Expos
The Montreal Expos were a Major League Baseball team located in Montreal, Quebec from 1969 through 2004, holding the first MLB franchise awarded outside the United States. After the 2004 season, MLB moved the Expos to Washington, D.C. and renamed them the Nationals.Named after the Expo 67 World's...
. Pentagon Centre, shopping mall, was one of three sites in Arlington County. The other two proposed Arlington sites were a plot of undeveloped land closer to the Pentagon and a site in the neighborhood of Rosslyn
Rosslyn, Virginia
Rosslyn is an unincorporated area in Northern Virginia located in the northeastern corner of Arlington County, Virginia, north of Arlington National Cemetery and directly across the Potomac River from Georgetown in Washington, D.C. Rosslyn encompasses the Arlington neighborhoods of North Rosslyn...
. The issue was highly divisive and some Pentagon City residents launched a visible campaign against it. After the Arlington County Board opposed a stadium in Arlington, the final Virginia bid featured a site near Dulles Airport instead. Major League Baseball
Major League Baseball
Major League Baseball is the highest level of professional baseball in the United States and Canada, consisting of teams that play in the National League and the American League...
finally announced in the fall of 2004 that the Expos would move to the District of Columbia as the Washington Nationals
Washington Nationals
The Washington Nationals are a professional baseball team based in Washington, D.C. The Nationals are a member of the Eastern Division of the National League of Major League Baseball . The team moved into the newly built Nationals Park in 2008, after playing their first three seasons in RFK Stadium...
. 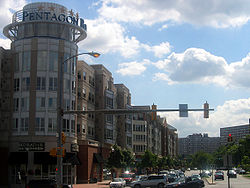 Within Pentagon City there are many high-rise luxury apartments and condos. Around the Fashion Centre Mall complex are several apartment buildings including The Metropolitan at Pentagon Row, Pentagon Row, and Park View. Across from the Pentagon City Mall and Costco is the four-story Southampton Condominium townhouse community. Also on that block are Claridge House, and Potomac Center Genesis Care; both residences for retired
Retirement
Retirement is the point where a person stops employment completely. A person may also semi-retire by reducing work hours.Many people choose to retire when they are eligible for private or public pension benefits, although some are forced to retire when physical conditions don't allow the person to...
as well as disabled
Disability
A disability may be physical, cognitive, mental, sensory, emotional, developmental or some combination of these.Many people would rather be referred to as a person with a disability instead of handicapped...
residents.

There is an open eight phase construction site next door to Costco on Fern St, where the new Metropolitan Park development is being constructed. Kettler, real-estate development and property management company, razed warehouses that were a portion of an older industrial park for the project. The first phase of the project, completed in late 2007, consisted of The Gramercy at Metropolitan Park high-end rental apartments. Phase two of the project is scheduled for completion in late 2009 and consists of The Millennium at Metropolitan Park, a second high-end rental apartments. Both phases were architecturally planned by Robert A.M. Stern and include ground floor retail spaces suitable for any use. A two-and-a-half-acre park, with commissioned art, is also being constructed at the center of the project.

Virginia Highlands Park, located immediately south of the central retail area, provides a lush green space as well as basketball, tennis, soccer, and softball/baseball facilities. Adjacent to the park are the Aurora Hills branch of the Arlington Public Library system and a firehouse. The suburban neighborhood of Aurora Hills, which consists primarily of single-family detached housing, extends due south of Pentagon City.