The Pennsylvania Ministerium was the first Lutheran
Lutheranism
Lutheranism is a major branch of Western Christianity that identifies with the theology of Martin Luther, a German reformer. Luther's efforts to reform the theology and practice of the church launched the Protestant Reformation...
church body in North America
North America
North America is a continent wholly within the Northern Hemisphere and almost wholly within the Western Hemisphere. It is also considered a northern subcontinent of the Americas...
. With the encouragement of Henry Melchior Muhlenberg, the Ministerium was founded at a meeting of German-American Lutheran clergy on August 26, 1748. The group was known as the "Ministerium of North America" until 1792, when it adopted the name "The Ministerium of Pennsylvania and Adjacent States."

The Pennsylvania Ministerium was also the source of the first Lutheran liturgy
Christian liturgy
A liturgy is a set form of ceremony or pattern of worship. Christian liturgy is a pattern for worship used by a Christian congregation or denomination on a regular basis....
in America. Because of its unique place in the history of North American Lutheranism, the Ministerium continued to influence the church politics of Lutherans in America into the twentieth century.

German settlers had been arriving in North America since the mid-seventeenth century, and they were particularly attracted by William Penn
William Penn
William Penn was an English real estate entrepreneur, philosopher, and founder of the Province of Pennsylvania, the English North American colony and the future Commonwealth of Pennsylvania. He was an early champion of democracy and religious freedom, notable for his good relations and successful...
's promise of religious freedom in the colony of Pennsylvania
Pennsylvania
The Commonwealth of Pennsylvania is a U.S. state that is located in the Northeastern and Mid-Atlantic regions of the United States. The state borders Delaware and Maryland to the south, West Virginia to the southwest, Ohio to the west, New York and Ontario, Canada, to the north, and New Jersey to...
. By 1683, the number was large enough to form communities such as Germantown
Germantown, Philadelphia, Pennsylvania
Germantown is a neighborhood in the northwest section of the city of Philadelphia, Pennsylvania, United States, about 7–8 miles northwest from the center of the city...
(now a neighborhood in Philadelphia). Many of these immigrants brought with them their Lutheran faith and began to form congregations in their new homeland.

By the mid-eighteenth century, there was a growing need for well-trained Lutheran clergy
Pastor
The word pastor usually refers to an ordained leader of a Christian congregation. When used as an ecclesiastical styling or title, this role may be abbreviated to "Pr." or often "Ps"....
in the colonies. The Pietist
Pietism
Pietism was a movement within Lutheranism, lasting from the late 17th century to the mid-18th century and later. It proved to be very influential throughout Protestantism and Anabaptism, inspiring not only Anglican priest John Wesley to begin the Methodist movement, but also Alexander Mack to...
foundation at the University of Halle responded to this need, and sent 24 clergymen to minister in the colonies in 1742. Among those sent was Henry Melchior Muhlenberg. Muhlenberg's influence went beyond those congregations he served; he organized other Lutheran congregations in Pennsylvania so that they might work in cooperation. Such was his influence that Muhlenberg became regarded to be "the patriarch of the Lutheran church in North America. 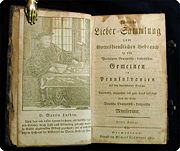 At Muhlenberg's request, German-American Lutheran pastors met together in Philadelphia on August 26, 1748. Six pastors and lay representatives from ten congregations attended the meeting, where they agreed to work together as the "ministerium of North America." They also adopted a common liturgy to be used in North America. This meeting has become known as "the most important event in the history of North American Lutheranism."

The Ministerium remained a relatively informal association until a constitution was drawn up and agreed upon in 1781. Along with a formal constitution, it adopted the name of the "German Evangelical Lutheran Ministerium of North America." The churches of the ministerium followed a polity influenced by the Dutch Reformed model and by Muhlenberg's Pietism, and did not insist on strict adherence to the Lutheran Confessions. During these early years, there were not only German pastors, but also Swedish pastors in the Ministerium. Members of the Ministerium could be found in Pennsylvania, New York, New Jersey, Maryland, Virginia, and even the Carolinas.

In 1784, Frederick A. Muhlenberg (second son of the earlier patriarch) organized the growing number of Lutheran congregations and clergy in the state of New York into the Ministerium of New York. Mindful of this and other Lutheran church bodies being founded in North America, in 1792 the group in Philadelphia renamed itself "The Ministerium of Pennsylvania and Adjacent States".

In 1818, the Pennsylvania Ministerium began talks of organizing the various Lutheran church bodies in America, so that they could "stand in some or another in closer connection with one another." At a meeting in Hagerstown, Maryland
Hagerstown, Maryland
Hagerstown is a city in northwestern Maryland, United States. It is the county seat of Washington County, and, by many definitions, the largest city in a region known as Western Maryland. The population of Hagerstown city proper at the 2010 census was 39,662, and the population of the...
in October 1820, just such an organization was founded in the General Synod (formally titled the "Evangelical Lutheran General Synod of the United States of North America"). At the outset, this group consisted of the Pennsylvania Ministerium, along with the New York Ministerium and the Maryland-Virginia Synod.

The General Synod served largely in an advisory function—each church body within the Synod retained its own constitution and independence. The primary role of the Synod was to facilitate cooperation among the various church bodies. It was under the auspices of the General Synod, with the leadership of Samuel Simon Schmucker
Samuel Simon Schmucker
Samuel Simon Schmucker was a German-American Lutheran pastor and theologian. He was integral to the founding of the Lutheran church body known as the General Synod, as well as the oldest continuously-operating Lutheran seminary and college in North America .Later in his career, Schmucker became a...
, that a Lutheran seminary
Lutheran Theological Seminary at Gettysburg
The Lutheran Theological Seminary at Gettysburg is America's oldest Lutheran seminary and a site of 1863 Battle of Gettysburg military engagements.-History:...
and college
Gettysburg College
Gettysburg College is a private four-year liberal arts college founded in 1832, in Gettysburg, Pennsylvania, United States, adjacent to the famous battlefield. Its athletic teams are nicknamed the Bullets. Gettysburg College has about 2,700 students, with roughly equal numbers of men and women...
were founded in Gettysburg, Pennsylvania
Gettysburg, Pennsylvania
Gettysburg is a borough that is the county seat, part of the Gettysburg Battlefield, and the eponym for the 1863 Battle of Gettysburg. The town hosts visitors to the Gettysburg National Military Park and has 3 institutions of higher learning: Lutheran Theological Seminary, Gettysburg College, and...
.

Despite its role in establishing the General Synod, the Pennsylvania Ministerium withdrew from the inter-Lutheran organization in 1823. Within the Ministerium, there was a close relationship between Lutheran and Reformed congregations, and many felt that the General Synod might jeopardize that relationship. In addition, many in the Ministerium were wary of a centralized organization, and the control that it might exert over individual congregations.

Thus, in the years following, the Pennsylvania Ministerium remained an independent Lutheran church body. However, the Ministerium sought to maintain a relationship with the Synod, including continuing to send its ministerial students to the General Synod's seminary in Gettysburg, which was headed by Samuel Schmucker.

In the decades that followed, the Ministerium became less concerned with its relationship with the Reformed church and saw a significant increase in Lutheran identity and the importance of the Lutheran Confessions. Thus, in 1853, the Ministerium rejoined other Lutherans in the General Synod. However, this renewed relationship would prove to be short-lived. 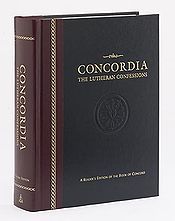 As with many Protestant churches, the General Synod was split on the issue of the American Civil War
American Civil War
The American Civil War was a civil war fought in the United States of America. In response to the election of Abraham Lincoln as President of the United States, 11 southern slave states declared their secession from the United States and formed the Confederate States of America ; the other 25...
in the 1860s. Yet this was not the biggest challenge to Lutheran unity in the middle of the 19th century. As the importance of the Lutheran Confessions grew among American Lutherans, Samuel Schmucker—who was once seen confessionally conservative—found himself on the outside of the consensus of other Lutherans. In 1855, Schmucker, along with two other theologians from the Gettysburg seminary, penned the Definite Synodical Platform. This document downplayed the importance of the Confessions—indeed even suggested an edited "American Recension" of the Augsburg Confession
Augsburg Confession
The Augsburg Confession, also known as the "Augustana" from its Latin name, Confessio Augustana, is the primary confession of faith of the Lutheran Church and one of the most important documents of the Lutheran reformation...
—and sought to establish a distinctly American Lutheranism that was more at home with other Protestants in the country.

It is not clear whether the members of the Ministerium intended for this to be a permanent break, or a temporary protest. Regardless, it became permanent when the officials at the next Gathering of the General Synod refused to admit the delegates from the Ministerium. Thus, the Ministerium found themselves on their own.

In 1864, unhappy with the direction of the General Synod and its seminary at Gettysburg, the Ministerium established a new seminary in Philadelphia, and asked Charles Porterfield Krauth
Charles Porterfield Krauth
Charles Porterfield Krauth was a pastor, theologian and educator in the Lutheran branch of Christianity. He is a leading figure in the revival of the Lutheran Confessions connected to Neo-Lutheranism in the United States.- Education and parish ministry :He was born in Martinsburg, Virginia...
to head the seminary (now known as the Lutheran Theological Seminary at Philadelphia
Lutheran Theological Seminary at Philadelphia
The Lutheran Theological Seminary at Philadelphia is one of eight seminaries associated with the Evangelical Lutheran Church in America , located in Philadelphia . It was founded in 1864 but traces its roots further back to the first Lutheran establishment in Philadelphia founded by Henry Melchior...
). This was followed, in 1867, with the Ministerium being joined by thirteen other church bodies in a more conservative and confessional organization known as the General Council
General Council (Lutheran)
The General Council of the Evangelical Lutheran Church in North America was a conservative Lutheran church body, formed as a reaction against the new "Americanized Lutheranism" of Samuel Simon Schmucker and the General Synod....
.