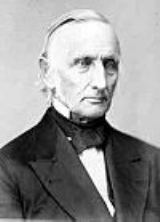 Encyclopedia
Samuel Simon Schmucker (February 28, 1799–July 26, 1873) was a German-American Lutheran
Lutheranism
Lutheranism is a major branch of Western Christianity that identifies with the theology of Martin Luther, a German reformer. Luther's efforts to reform the theology and practice of the church launched the Protestant Reformation...
pastor and theologian. He was integral to the founding of the Lutheran church body known as the General Synod
General Synod (Lutheran)
The General Synod was an association of Lutheran church bodies in America....
, as well as the oldest continuously-operating Lutheran seminary (Gettysburg Seminary) and college in North America (Gettysburg College
Gettysburg College
Gettysburg College is a private four-year liberal arts college founded in 1832, in Gettysburg, Pennsylvania, United States, adjacent to the famous battlefield. Its athletic teams are nicknamed the Bullets. Gettysburg College has about 2,700 students, with roughly equal numbers of men and women...
).

Later in his career, Schmucker became a controversial figure because of his theological positions, in particular his approach to the Lutheran Confessions. Outside of the church, Schmucker was a noted abolitionist.

Samuel Simon Schmucker was born in 1799 in Hagerstown, Maryland
Hagerstown, Maryland
Hagerstown is a city in northwestern Maryland, United States. It is the county seat of Washington County, and, by many definitions, the largest city in a region known as Western Maryland. The population of Hagerstown city proper at the 2010 census was 39,662, and the population of the...
. His father, Johann Georg Schmucker, was a German immigrant and an ordained pastor in the Pennsylvania Ministerium
Pennsylvania Ministerium
The Pennsylvania Ministerium was the first Lutheran church body in North America. With the encouragement of Henry Melchior Muhlenberg, the Ministerium was founded at a meeting of German-American Lutheran clergy on August 26, 1748...
. Samuel Schmucker showed a promising intellect at a young age, and entered the University of Pennsylvania
University of Pennsylvania
The University of Pennsylvania is a private, Ivy League university located in Philadelphia, Pennsylvania, United States. Penn is the fourth-oldest institution of higher education in the United States,Penn is the fourth-oldest using the founding dates claimed by each institution...
at age 15.

After teaching briefly at the York Academy, Schmucker went on a missionary journey to the western frontier of Kentucky and Ohio. On his return he studied at Princeton Theological Seminary
Princeton Theological Seminary
Princeton Theological Seminary is a theological seminary of the Presbyterian Church located in the Borough of Princeton, New Jersey in the United States...
, and was ordained a Lutheran minister (1820). In 1820 he helped to establish the General Synod
General Synod (Lutheran)
The General Synod was an association of Lutheran church bodies in America....
of the Lutheran Church in America, one of the first organizations of the American Lutheran church. From 1826 to 1864 he served as professor
Professor
A professor is a scholarly teacher; the precise meaning of the term varies by country. Literally, professor derives from Latin as a "person who professes" being usually an expert in arts or sciences; a teacher of high rank...
of didactic theology and chairman of the faculty
Faculty (university)
A faculty is a division within a university comprising one subject area, or a number of related subject areas...
in Gettysburg Seminary
Lutheran Theological Seminary at Gettysburg
The Lutheran Theological Seminary at Gettysburg is America's oldest Lutheran seminary and a site of 1863 Battle of Gettysburg military engagements.-History:...
, of which he was one of the founders. Schmucker Hall on the campus was named in his honor. During the Battle of Gettysburg
Battle of Gettysburg
The Battle of Gettysburg , was fought July 1–3, 1863, in and around the town of Gettysburg, Pennsylvania. The battle with the largest number of casualties in the American Civil War, it is often described as the war's turning point. Union Maj. Gen. George Gordon Meade's Army of the Potomac...
, Schmucker's house was used as a field hospital
Field hospital
A field hospital is a large mobile medical unit that temporarily takes care of casualties on-site before they can be safely transported to more permanent hospital facilities...
for soldiers of both armies. He was never compensated for the damages incurred.

His publication of 1838 prepared the way for the formation of the Evangelical Alliance
Evangelical Alliance
The Evangelical Alliance is a London-based charitable organization founded in 1846. It has a claimed representation of over 1,000,000 evangelical Christians in the United Kingdom and is the oldest alliance of evangelical Christians in the world....
, which was formed in Freemason's Hall, London
London
London is the capital city of :England and the :United Kingdom, the largest metropolitan area in the United Kingdom, and the largest urban zone in the European Union by most measures. Located on the River Thames, London has been a major settlement for two millennia, its history going back to its...
, August 19–23, 1846. The American branch was organized in 1867. He was the leader of the low-church Lutheran party who were connected with the General Synod and was better known outside of his communion
Christian denomination
A Christian denomination is an identifiable religious body under a common name, structure, and doctrine within Christianity. In the Orthodox tradition, Churches are divided often along ethnic and linguistic lines, into separate churches and traditions. Technically, divisions between one group and...
than any other Lutheran minister.

Schmucker was a very controversial theologian that Confessional Lutheran
Confessional Lutheran
Confessional Lutheran is a name used by certain Lutheran Christians to designate themselves as those who accept the doctrines taught in the Book of Concord of 1580 in their entirety, because they believe them to be completely faithful to the teachings of the Bible...
s viewed as a threat to American Lutheranism. They did not believe he was actually a Lutheran, but rather, a Reformed theologian working to destroy American Lutheranism from the inside through absorbing it into a union with non-Lutheran American Protestants. His plan to discard the Augsburg Confession as a declaration of Lutheran belief in favor of a mutilated confession compatible with Reformed theology alienated him from former allies. He published this altered confession anonymously, but it failed to pass even within his own church body.

Because Schmucker denied the Real Presence in the Lord's Supper, he is categorically placed in the "Un-Lutheran" camp by Charles Porterfield Krauth
Charles Porterfield Krauth
Charles Porterfield Krauth was a pastor, theologian and educator in the Lutheran branch of Christianity. He is a leading figure in the revival of the Lutheran Confessions connected to Neo-Lutheranism in the United States.- Education and parish ministry :He was born in Martinsburg, Virginia...
. Schmucker wrote, "worthy communicants, in this ordinance, by faith spiritually feed on the body and blood of the Redeemer, thus holding communion or fellowship with Him.". This demonstrates Schmucker held to the Calvinist spiritual explanation of the Lord's Supper rather than the Lutheran teaching of Sacramental Union
Sacramental Union
Sacramental union is the Lutheran theological doctrine of the Real Presence of the body and blood of Christ in the Christian Eucharist....
. Wilhelm Sihler
Wilhelm Sihler
Wilhelm Sihler was a German American Lutheran minister. A proponent for Christian education, Wilhelm Sihler founded Concordia Theological Seminary, in Fort Wayne, Indiana.-Biography:...
of the Missouri Synod criticized Samuel Simon Schmucker, terming him "apostate," and asserting that Schmucker and other like-minded leaders of the General Synod were "open counterfeiters, Calvinists, Methodists, and Unionists...traitors and destroyers of the Lutheran Church".

The Schaff Herzog Encyclopedia of Religious knowledge states his theological position was a mix of "Puritanism, Pietism, and shallow Rationalism" rather than Lutheranism.

His published works number more than one hundred. Among them are:
He wrote a large number of discourses and addresses, and articles in the Evangelical Review and other periodicals.