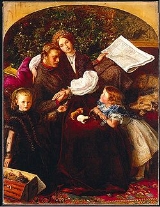 Encyclopedia
Peace Concluded, 1856 is a painting by John Everett Millais
John Everett Millais
Sir John Everett Millais, 1st Baronet, PRA was an English painter and illustrator and one of the founders of the Pre-Raphaelite Brotherhood.-Early life:...
which depicts a wounded British officer reading The Times
The Times
The Times is a British daily national newspaper, first published in London in 1785 under the title The Daily Universal Register . The Times and its sister paper The Sunday Times are published by Times Newspapers Limited, a subsidiary since 1981 of News International...
newspaper's report of the end of the Crimean war
Crimean War
The Crimean War was a conflict fought between the Russian Empire and an alliance of the French Empire, the British Empire, the Ottoman Empire, and the Kingdom of Sardinia. The war was part of a long-running contest between the major European powers for influence over territories of the declining...
. It was exhibited at the Royal Academy
Royal Academy
The Royal Academy of Arts is an art institution based in Burlington House on Piccadilly, London. The Royal Academy of Arts has a unique position in being an independent, privately funded institution led by eminent artists and architects whose purpose is to promote the creation, enjoyment and...
in 1856 to mixed reviews, but was strongly endorsed by the critic John Ruskin
John Ruskin
John Ruskin was the leading English art critic of the Victorian era, also an art patron, draughtsman, watercolourist, a prominent social thinker and philanthropist. He wrote on subjects ranging from geology to architecture, myth to ornithology, literature to education, and botany to political...
who proclaimed that in the future it would be recognised as "among the world's best masterpieces". The central figure in the painting is a portrait of Millais's wife Effie Gray
Effie Gray
Euphemia Chalmers Millais, Lady Millais née Gray, known as Effie Gray, Effie Ruskin or Effie Millais was the wife of the critic John Ruskin, but left her husband without the marriage being consummated, and after the annulment of the marriage, married his protégé, the Pre-Raphaelite painter John...
, who had previously been married to Ruskin, but had left her husband for the artist.

There is some evidence that Millais originally intended the painting to be satirical - an attack on pampered officers who were allowed to go home for so-called "urgent private affairs", while ordinary soldiers were forced to live in poor conditions in the Crimea. When the war ended, the satire seemed obsolete, so he changed it to a portrayal of a wounded officer recuperating at home.

The two children have been playing with a wooden box in the form of Noah's ark
Noah's Ark
Noah's Ark is a vessel appearing in the Book of Genesis and the Quran . These narratives describe the construction of the ark by Noah at God's command to save himself, his family, and the world's animals from the worldwide deluge of the Great Flood.In the narrative of the ark, God sees the...
, a popular toy in this period. It contains models of various animals, some of which have been placed on the mother's lap. Each animal symbolises one of the combatants in the Crimean war. The Gallic rooster
Gallic rooster
The Gallic rooster is an unofficial national symbol of France as a nation .-France:...
is the symbol of France
France
The French Republic , The French Republic , The French Republic , (commonly known as France , is a unitary semi-presidential republic in Western Europe with several overseas territories and islands located on other continents and in the Indian, Pacific, and Atlantic oceans. Metropolitan France...
; the lion
Lion
The lion is one of the four big cats in the genus Panthera, and a member of the family Felidae. With some males exceeding 250 kg in weight, it is the second-largest living cat after the tiger...
of Britain; the bear
Polar Bear
The polar bear is a bear native largely within the Arctic Circle encompassing the Arctic Ocean, its surrounding seas and surrounding land masses. It is the world's largest land carnivore and also the largest bear, together with the omnivorous Kodiak Bear, which is approximately the same size...
of Russia
Russia
Russia or , officially known as both Russia and the Russian Federation , is a country in northern Eurasia. It is a federal semi-presidential republic, comprising 83 federal subjects...
; the turkey
Turkey (bird)
A turkey is a large bird in the genus Meleagris. One species, Meleagris gallopavo, commonly known as the Wild Turkey, is native to the forests of North America. The domestic turkey is a descendant of this species...
of the Ottoman empire
Ottoman Empire
The Ottoman EmpireIt was usually referred to as the "Ottoman Empire", the "Turkish Empire", the "Ottoman Caliphate" or more commonly "Turkey" by its contemporaries...
(based in Turkey
Turkey
Turkey , known officially as the Republic of Turkey , is a Eurasian country located in Western Asia and in East Thrace in Southeastern Europe...
). The child at the left has just picked a dove from the box, symbolising peace. The rich fabric of the mother's dress creates a large red patch under the toys, suggestive of blood. The girl on the right holds up her father's campaign medal, looking at him questioningly.

In the background is a print of
The Death of Major Peirson by John Singleton Copley
John Singleton Copley
John Singleton Copley was an American painter, born presumably in Boston, Massachusetts, and a son of Richard and Mary Singleton Copley, both Irish. He is famous for his portrait paintings of important figures in colonial New England, depicting in particular middle-class subjects...
, depicting the death of a British officer defending Jersey
Jersey
Jersey, officially the Bailiwick of Jersey is a British Crown Dependency off the coast of Normandy, France. As well as the island of Jersey itself, the bailiwick includes two groups of small islands that are no longer permanently inhabited, the Minquiers and Écréhous, and the Pierres de Lecq and...
(Millais's family home) during the Battle of Jersey
Battle of Jersey
The Battle of Jersey was an attempt by France to invade Jersey and remove the threat the island posed to American shipping in the American War of Independence. Jersey was used as a base for privateering by the British, and France, engaged in the war as an ally of the United States, sent an...
(1781).