Components of the shopping mall 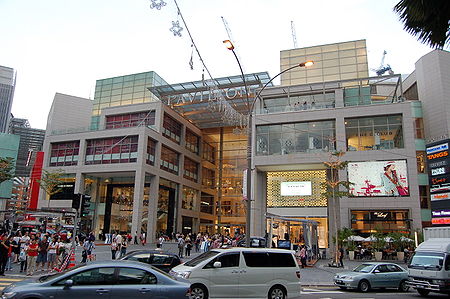 Pavilion Kuala Lumpur contains over 450 retail shops that are spread across seven levels. There are a number of double-storey flagship
Flagship
A flagship is a vessel used by the commanding officer of a group of naval ships, reflecting the custom of its commander, characteristically a flag officer, flying a distinguishing flag...
stores, of which some are street-front fashion boutiques which constitute the shopping mall.

There are several fashion and luxury goods boutiques that encompass a large portion of the mall's retail floor area. Several eateries and cafés also exist in the shopping mall like fast food restaurant
Fast food restaurant
A fast food restaurant, also known as a Quick Service Restaurant or QSR within the industry itself, is a specific type of restaurant characterized both by its fast food cuisine and by minimal table service...
s, coffeehouse chains
Coffeehouse
A coffeehouse or coffee shop is an establishment which primarily serves prepared coffee or other hot beverages. It shares some of the characteristics of a bar, and some of the characteristics of a restaurant, but it is different from a cafeteria. As the name suggests, coffeehouses focus on...
and a food court
Food court
A food court is generally an indoor plaza or common area within a facility that is contiguous with the counters of multiple food vendors and provides a common area for self-serve dining. Food courts may be found in shopping malls and airports, and in various regions may be a standalone development...
. Anchor stores include Parkson
Parkson
Parkson is a popular department store company in Malaysia which offers items at a medium rate. Parkson was established in 1987 as one of the largest retail chains in Malaysia at that time...
, Singaporean departmental store Tangs
Tangs
Tangs is a company that specialises in the retail market, selling goods to customers. It is based in Singapore, and owns Singapore's oldest store which has become an icon of the Singapore retail market...
, Mercato d'Marketplace, Golden Screen Cinemas
Golden Screen Cinemas
Golden Screen Cinemas is the largest chain of cinemas in Malaysia. The biggest cinema is located at Mid Valley Megamall. It houses 18 screen cinemas and has 2899 seats which is the largest in Malaysia.- History :...
and Harvey Norman
Harvey Norman
Harvey Norman is a large Australian-based retailer of electrical, computer, furniture, entertainment and bedding goods. It is effectively a franchise and the main brand owned by Harvey Norman Holdings Limited...
.

This shopping mall is accessible by several railway lines that run through the city centre.

Ampang Line
Ampang Line
The Ampang Line is one of the two lines in Kuala Lumpur Rail Transit System network operated by RapidKL Rail network. The other rail network is the Kelana Jaya Line....

KTM Komuter
KTM Komuter
KTM Komuter is a commuter train service in Malaysia operated by Keretapi Tanah Melayu . It was introduced in 1995 to provide local rail services in Kuala Lumpur and the surrounding Klang Valley suburban areas. It is popular with commuters into the city, who thus avoid being caught in road traffic...