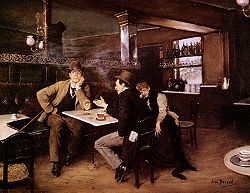 A bistro, sometimes spelled bistrot, is, in its original Paris
Paris
Paris is the capital and largest city in France, situated on the river Seine, in northern France, at the heart of the Île-de-France region...
ian incarnation, a small restaurant
Restaurant
A restaurant is an establishment which prepares and serves food and drink to customers in return for money. Meals are generally served and eaten on premises, but many restaurants also offer take-out and food delivery services...
serving moderately priced simple meals in a modest setting. Bistros are defined mostly by the foods they serve. Home cooking with robust earthy dishes, and slow-cooked foods like cassoulet
Cassoulet
Cassoulet is a rich, slow-cooked bean stew or casserole originating in the south of France, containing meat , pork skin and white haricot beans....
are typical.

Bistros likely developed out of the basement kitchens of Parisian apartments where tenants paid for both room and board. Landlords could supplement their income by opening their kitchen to the paying public. Menus were built around foods that were simple, could be prepared in quantity and would keep over time. Wine and coffee were also served. The limited space for diners in these cramped corners prompted the tradition of adding table service to the footpath. As the idea caught hold, architecture and menus both became more specific.

The origins of the word bistro are uncertain. Some say that it may derive from the Russian
Russian language
Russian is a Slavic language used primarily in Russia, Belarus, Uzbekistan, Kazakhstan, Tajikistan and Kyrgyzstan. It is an unofficial but widely spoken language in Ukraine, Moldova, Latvia, Turkmenistan and Estonia and, to a lesser extent, the other countries that were once constituent republics...
bystro (быстро), "quickly". According to an urban legend, it entered the French language during the Russian occupation of Paris in 1815
Battle of Paris (1814)
The Battle of Paris was fought during the Napoleonic Wars in 1814. The French defeat led directly to the abdication of Napoleon I.-Background:...
. Russian cossacks who wanted to be served quickly would shout "bystro." However, this etymology is not accepted by several French linguists as there is, notably, no occurrence of this word until the end of the 19th century. Others say the name comes from a type of aperitif, called a bistrouille (or liqueur coffee
Liqueur coffee
A liqueur coffee is a coffee drink with a shot of liqueur. It is usually served in a special liqueur coffee glass, often with whipped cream and sugar.-Liqueur coffee names:...
), served in some reasonably priced restaurants.