Encyclopedia
Tangs is a company
Company
A company is a form of business organization. It is an association or collection of individual real persons and/or other companies, who each provide some form of capital. This group has a common purpose or focus and an aim of gaining profits. This collection, group or association of persons can be...
that specialises in the retail market, selling goods to customers. It is based in Singapore
Singapore
Singapore , officially the Republic of Singapore, is a Southeast Asian city-state off the southern tip of the Malay Peninsula, north of the equator. An island country made up of 63 islands, it is separated from Malaysia by the Straits of Johor to its north and from Indonesia's Riau Islands by the...
, and owns Singapore's oldest store which has become an icon of the Singapore retail market. For many residents and visitors, TANGS has come to be regarded as a Singaporean shopping institution, along the lines of Selfridges
Selfridges
Selfridges, AKA Selfridges & Co, is a chain of high end department stores in the United Kingdom. It was founded by Harry Gordon Selfridge. The flagship store in London's Oxford Street is the second largest shop in the UK and was opened on 15 March 1909.More recently, three other stores have been...
in London or Bloomingdales in New York. 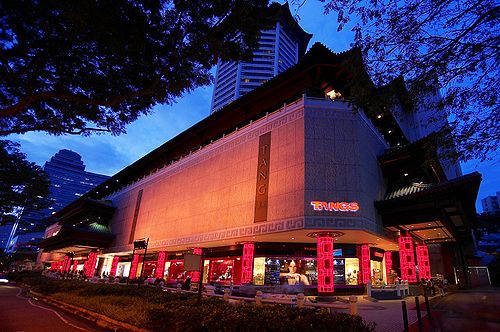 In the 1950s CK Tang bought some land on Orchard Road
Orchard Road
Orchard Road is a road in Singapore that is the retail and entertainment hub of the city-state. It is regularly frequented by the local population as well as being a major tourist attraction...
, Singapore which is the current location of TANGS. When CK Tang bought the land, it was situated near a Chinese cemetery
Cemetery
A cemetery is a place in which dead bodies and cremated remains are buried. The term "cemetery" implies that the land is specifically designated as a burying ground. Cemeteries in the Western world are where the final ceremonies of death are observed...
, which spells bad luck in Chinese culture. However, this general belief did not affect CK Tang's views on his land, and soon he went on the develop TANGS.


Evolution of a brand

In the 1980s TANGS launched the highly successful tag line "All The Best Under One Roof".
TANGS was a favorite place for the expatriate community and Singaporeans alike for household goods and fashion. TANGS led in an uncrowded retail market.

The company was known as a fair employer and was closed on Sunday (which is unusual in Asia) as CK Tang was very religious. He was a Christian and the son of a Presbyterian preacher.

In the late 1980s and early 1990s one of CK Tangs sons, Tang Wee Sung took control of the store. He went on to become Chairman in 2000 when CK Tang died. This led to Sunday opening and a broader merchandising policy bringing greater choice to Singaporean consumers especially from fashion houses of the USA.

Years later, Orchard Road went on to become the Oxford Street
Oxford Street
Oxford Street is a major thoroughfare in the City of Westminster in the West End of London, United Kingdom. It is Europe's busiest shopping street, as well as its most dense, and currently has approximately 300 shops. The street was formerly part of the London-Oxford road which began at Newgate,...
of Singapore
Singapore
Singapore , officially the Republic of Singapore, is a Southeast Asian city-state off the southern tip of the Malay Peninsula, north of the equator. An island country made up of 63 islands, it is separated from Malaysia by the Straits of Johor to its north and from Indonesia's Riau Islands by the...
and is today one of the most vibrant shopping districts in South East Asia. Much of this is credited to the location of TANGS leading the way.

Today the TANGS on Orchard Road remains the flagship store of the group and occupies 15,000 square meters and five floors of shopping space. Being one of the biggest stores in Orchard Road, it has a big influence on the prosperity of Orchard Road.

In 2006, TANGS opened another store in VivoCity
VivoCity
VivoCity is the largest shopping mall in Singapore. Located in the HarbourFront precinct, it was designed by the Japanese architect Toyo Ito. Its name is derived from the word vivacity...
as the anchor tenant, bringing along the new fashion lifestyle concepts. Occupying approximately 85000 square feet (7,896.8 m²), TANGS VivoCity has a more resort-like shopping environment, while TANGS Orchard embodies an urban and cosmopolitan concept.

Bringing the TANGS brand to Malaysia, TANGS Pavilion opened its doors in November 2007, with two levels of over 65000 square feet (6,038.7 m²) of space at Pavilion Kuala Lumpur
Pavilion Kuala Lumpur
Pavilion Kuala Lumpur is a shopping mall situated along the Bukit Bintang district in Kuala Lumpur, Malaysia. This place was built on the site where former Bukit Bintang Girls' School, the oldest school in Kuala Lumpur that has been moved to Cheras as Sekolah Seri Bintang Utara on 2000...
. In 2010, TANGS opened its second outlet in Malaysia, with two levels of floors in Empire Subang
Empire Subang
Empire Subang is a high-rise building in Subang Jaya, Selangor, Malaysia which comprises soho office towers, a shopping mall and a hotel. It is located near Subang Parade and behind Wisma Consplant . The building is categorized into four sections, namely Empire Soho, Empire Tower, Empire Hotel and...
, Subang Jaya
Subang Jaya
Subang Jaya is a suburban city in the Klang Valley, Selangor, Malaysia. It comprises the southern third of the district of Petaling, and is home to a third of the district population of 1.78 million. Subang Jaya comprises , Bandar Sunway, UEP Subang Jaya, Putra Heights and Batu Tiga...
.
The source of this article is wikipedia, the free encyclopedia.  The text of this article is licensed under the GFDL.