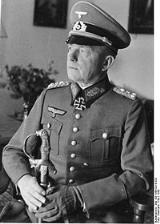 Born in Braunfels an der Lahn
Braunfels
Braunfels is a town in the Lahn-Dill-Kreis in Hesse, Germany. It is located on the German Framework Road.- Location :The climatic spa of Braunfels lies at a height of some 100 m above the Lahn valley...
into an aristocratic family
Von Kleist
Von Kleist is a Pomeranian Prussian noble family. Notable members of this family include:* Ewald Jürgen Georg von Kleist ; co-inventor of the Leyden jar* Ewald Christian von Kleist ; German poet and soldier...
, Kleist was educated in a German military school and graduated in 1900. He served as a lieutenant
Lieutenant
A lieutenant is a junior commissioned officer in many nations' armed forces. Typically, the rank of lieutenant in naval usage, while still a junior officer rank, is senior to the army rank...
of hussar
Hussar
Hussar refers to a number of types of light cavalry which originated in Hungary in the 14th century, tracing its roots from Serbian medieval cavalry tradition, brought to Hungary in the course of the Serb migrations, which began in the late 14th century....
s and a regimental commander in World War I
World War I
World War I , which was predominantly called the World War or the Great War from its occurrence until 1939, and the First World War or World War I thereafter, was a major war centred in Europe that began on 28 July 1914 and lasted until 11 November 1918...
. After the war he served as a commander of a cavalry division
Division (military)
A division is a large military unit or formation usually consisting of between 10,000 and 20,000 soldiers. In most armies, a division is composed of several regiments or brigades, and in turn several divisions typically make up a corps...
from 1932-35.

Kleist was semi-retired when, in August 1939, he was recalled to active duty at the age of fifty-eight.

In the invasion of Poland
Invasion of Poland (1939)
The Invasion of Poland, also known as the September Campaign or 1939 Defensive War in Poland and the Poland Campaign in Germany, was an invasion of Poland by Germany, the Soviet Union, and a small Slovak contingent that marked the start of World War II in Europe...
, Kleist commanded the XXII Panzer
Panzer
A Panzer is a German language word that, when used as a noun, means "tank". When it is used as an adjective, it means either tank or "armoured" .- Etymology :...
Corps
Corps
A corps is either a large formation, or an administrative grouping of troops within an armed force with a common function such as Artillery or Signals representing an arm of service...
. In the Battle of France
Battle of France
In the Second World War, the Battle of France was the German invasion of France and the Low Countries, beginning on 10 May 1940, which ended the Phoney War. The battle consisted of two main operations. In the first, Fall Gelb , German armoured units pushed through the Ardennes, to cut off and...
he commanded Panzergruppe von Kleist, consisting of XLI Panzer Corps
XXXXI Panzer Corps (Germany)
XXXXI Panzer Corps was a tank corps in the German Army during World War II.-Formation and actions:...
and XIX Panzer Corps (under Heinz Guderian
Heinz Guderian
Heinz Wilhelm Guderian was a German general during World War II. He was a pioneer in the development of armored warfare, and was the leading proponent of tanks and mechanization in the Wehrmacht . Germany's panzer forces were raised and organized under his direction as Chief of Mobile Forces...
), the two southernmost armoured corps in the drive to the English Channel
English Channel
The English Channel , often referred to simply as the Channel, is an arm of the Atlantic Ocean that separates southern England from northern France, and joins the North Sea to the Atlantic. It is about long and varies in width from at its widest to in the Strait of Dover...
. During this time he attempted to relieve Guderian of his command after he disobeyed orders to halt their advance toward the Channel; the Army Group A commander, Gerd von Rundstedt
Gerd von Rundstedt
Karl Rudolf Gerd von Rundstedt was a Generalfeldmarschall of the German Army during World War II. He held some of the highest field commands in all phases of the war....
, refused to confirm the order, and the Franco-British armies were trapped.

In April 1941, Kleist commanded 1st Panzergruppe, comprising III, XIV and XLVIII Panzer Corps and XXIX Infantry Corps, which spearheaded the Blitzkrieg
Blitzkrieg
For other uses of the word, see: Blitzkrieg Blitzkrieg is an anglicized word describing all-motorised force concentration of tanks, infantry, artillery, combat engineers and air power, concentrating overwhelming force at high speed to break through enemy lines, and, once the lines are broken,...
-style invasions of Yugoslavia
Yugoslavia
Yugoslavia refers to three political entities that existed successively on the western part of the Balkans during most of the 20th century....
and Greece
Battle of Greece
The Battle of Greece is the common name for the invasion and conquest of Greece by Nazi Germany in April 1941. Greece was supported by British Commonwealth forces, while the Germans' Axis allies Italy and Bulgaria played secondary roles...
. With this formation he also participated in the subsequent Operation Barbarossa
Operation Barbarossa
Operation Barbarossa was the code name for Germany's invasion of the Soviet Union during World War II that began on 22 June 1941. Over 4.5 million troops of the Axis powers invaded the USSR along a front., the largest invasion in the history of warfare...
as part of Army Group South
Army Group South
Army Group South was the name of a number of German Army Groups during World War II.- Poland campaign :Germany used two army groups to invade Poland in 1939: Army Group North and Army Group South...
.

In 1942 Kleist was sent to command troops in the Caucasus
Caucasus
The Caucasus, also Caucas or Caucasia , is a geopolitical region at the border of Europe and Asia, and situated between the Black and the Caspian sea...
in order to capture important oil wells in the area. On 22 November 1942, he was placed in command of Army Group A
Army Group A
Army Group A was the name of a number of German Army Groups during World War II.-Western Front, 1940:During the German invasion of the Low Countries and France Army Group A was under the command of General Gerd von Rundstedt, and was responsible for the break-out through the Ardennes...
. He was promoted to field marshal
Field Marshal
Field Marshal is a military rank. Traditionally, it is the highest military rank in an army.-Etymology:The origin of the rank of field marshal dates to the early Middle Ages, originally meaning the keeper of the king's horses , from the time of the early Frankish kings.-Usage and hierarchical...
in 1943. He was relieved of his command in March 1944 for ordering the 8th Army
German Eighth Army
The 8th Army was a World War I and World War II field army.-World War I:At the outbreak of World War I, the 8. Armee was stationed in East Prussia to defend against the expected Russian attack, Plan XIX. After the scrappy Battle of Gumbinnen, 8. Armee commander Generaloberst Maximilian von...
to retreat when it was in danger of destruction by the Soviet
Soviet Union
The Soviet Union , officially the Union of Soviet Socialist Republics , was a constitutionally socialist state that existed in Eurasia between 1922 and 1991....
Red Army
Red Army
The Workers' and Peasants' Red Army started out as the Soviet Union's revolutionary communist combat groups during the Russian Civil War of 1918-1922. It grew into the national army of the Soviet Union. By the 1930s the Red Army was among the largest armies in history.The "Red Army" name refers to...
, in explicit violation of Adolf Hitler
Adolf Hitler
Adolf Hitler was an Austrian-born German politician and the leader of the National Socialist German Workers Party , commonly referred to as the Nazi Party). He was Chancellor of Germany from 1933 to 1945, and head of state from 1934 to 1945...
's orders.

Kleist was captured by United States forces in 1945. He was sent to communist Yugoslavia
Yugoslavia
Yugoslavia refers to three political entities that existed successively on the western part of the Balkans during most of the 20th century....
to face war crimes charges in 1946. In 1948 he was extradited to the Soviet Union where he was given a 10 year sentence in 1952 for war crimes. He died in captivity in Vladimir Prison in 1954, the highest ranked German officer to die in Soviet captivity. Of note is the fact that Kleist was charged, among other things, with "alienating, through friendship & generosity, the peoples of the Soviet Union" as described in the book "Hitler's Generals" by Samuel W. Mitcham Jr. (2003).