Encyclopedia
The Eastern Front Medal, (Winterschlacht Im Osten), more commonly known as the Ostmedaille was instituted on May 26, 1942 to mark service on the German Eastern Front (World War II)
Eastern Front (World War II)
The Eastern Front of World War II was a theatre of World War II between the European Axis powers and co-belligerent Finland against the Soviet Union, Poland, and some other Allies which encompassed Northern, Southern and Eastern Europe from 22 June 1941 to 9 May 1945...
during the period November 15, 1941 to April 15, 1942. It was commissioned to recognise the hardship endured by German and Axis Powers
Axis Powers
The Axis powers , also known as the Axis alliance, Axis nations, Axis countries, or just the Axis, was an alignment of great powers during the mid-20th century that fought World War II against the Allies. It began in 1936 with treaties of friendship between Germany and Italy and between Germany and...
personnel, combatant or non-combatant, during the especially bitter Russian winter of '41/'42. It was wryly called the "Gefrierfleischorden" (Frozen Meat Medal) by the Heer
Heer
Heer is German for "army". Generally, its use as "army" is not restricted to any particular country, so "das britische Heer" would mean "the British army".However, more specifically it can refer to:*An army of Germany:...
, Luftwaffe
Luftwaffe
Luftwaffe is a generic German term for an air force. It is also the official name for two of the four historic German air forces, the Wehrmacht air arm founded in 1935 and disbanded in 1946; and the current Bundeswehr air arm founded in 1956....
& Waffen-SS
Waffen-SS
The Waffen-SS was a multi-ethnic and multi-national military force of the Third Reich. It constituted the armed wing of the Schutzstaffel or SS, an organ of the Nazi Party. The Waffen-SS saw action throughout World War II and grew from three regiments to over 38 divisions, and served alongside...
personnel to whom it was awarded.

Qualification for the award

Unique in that its designer was a contemporary serving soldier, SS-Unterscharführer Ernst Krause, the medal was held in high regard by all branches of the Wehrmacht. Measuring 36mm in diameter, of (generally) zinc construction, the medal was given a gun-metal coloured coating. On one side an eagle grasps a Swastika
Swastika
The swastika is an equilateral cross with its arms bent at right angles, in either right-facing form in counter clock motion or its mirrored left-facing form in clock motion. Earliest archaeological evidence of swastika-shaped ornaments dates back to the Indus Valley Civilization of Ancient...
and the reverse features the text "Winterschlacht Im Osten 1941/42" featuring a crossed sword and branch below the text. The helmet and outer ring were finished in a polished silver effect. A ribbon that accompanied the medal was coloured red, white and black (symbolic of blood, snow and death). The medal and ribbon were usually presented in a paper packet, but these were invariably discarded. Over 3 million were made by more than 26 confirmed firms by the time the order was officially decommissioned by Oberkommando der Wehrmacht
Oberkommando der Wehrmacht
The Oberkommando der Wehrmacht was part of the command structure of the armed forces of Nazi Germany during World War II.- Genesis :...
on September 4, 1944. 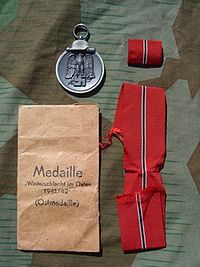