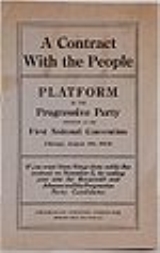 Encyclopedia
A party platform, or platform sometimes also referred to as a manifesto
Manifesto
A manifesto is a public declaration of principles and intentions, often political in nature. Manifestos relating to religious belief are generally referred to as creeds. Manifestos may also be life stance-related.-Etymology:...
, is a list of the actions which a political party
Political party
A political party is a political organization that typically seeks to influence government policy, usually by nominating their own candidates and trying to seat them in political office. Parties participate in electoral campaigns, educational outreach or protest actions...
, individual candidate, or other organization supports in order to appeal to the general public for the purpose of having said peoples' candidates voted into political office
Office
An office is generally a room or other area in which people work, but may also denote a position within an organization with specific duties attached to it ; the latter is in fact an earlier usage, office as place originally referring to the location of one's duty. When used as an adjective, the...
or the professed opinion(s) proposed as part of law
Law
Law is a system of rules and guidelines which are enforced through social institutions to govern behavior, wherever possible. It shapes politics, economics and society in numerous ways and serves as a social mediator of relations between people. Contract law regulates everything from buying a bus...
(s) or otherwise made into social policies. This often takes the form of a list of support for, or opposition to, socially relevant, urgent, controversial, or complicated topics or issues. Individual topics, and a party's, person's, or organization's opinion on them are often called the "planks" of their platform in reference to a basic stage
Stage
- acting :Stage , a space for the performance of theatrical productions* Theatre, a branch of the performing arts, often referred to as "the stage"* The Stage, a weekly British theatre newspaper...
made out of boards or planks of wood
Plank (wood)
A plank is a piece of timber, flat, elongated and rectangular, with parallel faces, higher or longer than wide, used in the construction of ships, houses, bridges, etc......
, similar to what can be assembled for public speaking
Public speaking
Public speaking is the process of speaking to a group of people in a structured, deliberate manner intended to inform, influence, or entertain the listeners...
or debates to be held on.