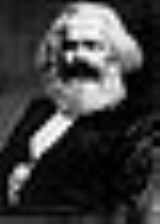 Overview
Karl Heinrich Marx was a German philosopher
Philosophy
Philosophy is the study of general and fundamental problems, such as those connected with existence, knowledge, values, reason, mind, and language. Philosophy is distinguished from other ways of addressing such problems by its critical, generally systematic approach and its reliance on rational...
, economist
Economics
Economics is the social science that analyzes the production, distribution, and consumption of goods and services. The term economics comes from the Ancient Greek from + , hence "rules of the house"...
, sociologist
Sociology
Sociology is the study of society. It is a social science—a term with which it is sometimes synonymous—which uses various methods of empirical investigation and critical analysis to develop a body of knowledge about human social activity...
, historian
Historian
A historian is a person who studies and writes about the past and is regarded as an authority on it. Historians are concerned with the continuous, methodical narrative and research of past events as relating to the human race; as well as the study of all history in time. If the individual is...
, journalist
Journalism
Journalism is the practice of investigation and reporting of events, issues and trends to a broad audience in a timely fashion. Though there are many variations of journalism, the ideal is to inform the intended audience. Along with covering organizations and institutions such as government and...
, and revolutionary socialist
Revolutionary socialism
The term revolutionary socialism refers to Socialist tendencies that advocate the need for fundamental social change through revolution by mass movements of the working class, as a strategy to achieve a socialist society...
. His ideas played a significant role in the development of social science and the socialist political movement
Socialism
Socialism is an economic system characterized by social ownership of the means of production and cooperative management of the economy; or a political philosophy advocating such a system. "Social ownership" may refer to any one of, or a combination of, the following: cooperative enterprises,...
. He published various books during his lifetime, with the most notable being The Communist Manifesto
The Communist Manifesto
The Communist Manifesto, originally titled Manifesto of the Communist Party is a short 1848 publication written by the German Marxist political theorists Karl Marx and Friedrich Engels. It has since been recognized as one of the world's most influential political manuscripts. Commissioned by the...
(1848) and Capital
Das Kapital
Das Kapital, Kritik der politischen Ökonomie , by Karl Marx, is a critical analysis of capitalism as political economy, meant to reveal the economic laws of the capitalist mode of production, and how it was the precursor of the socialist mode of production.- Themes :In Capital: Critique of...
(1867–1894); some of his works were co-written with his friend, the fellow German revolutionary socialist Friedrich Engels
Friedrich Engels
Friedrich Engels was a German industrialist, social scientist, author, political theorist, philosopher, and father of Marxist theory, alongside Karl Marx. In 1845 he published The Condition of the Working Class in England, based on personal observations and research...
.

Can anyone tell me in which text and where Marx writes on citizens and the bourgeoisie and sarcastically describes a type of person who as a bourgeois...

What is marx`s theories about community pschology

What are some criticisms of Marxist thought?

How did Marx's time in Paris and Brussels influence his later work?

What were some of Marx's ideas about the political economy?

What theories did Marx set forth in The Communist Manifesto?
More

The philosophers have only interpreted the world, in various ways. The point, however, is to change it.

Introduction to the Critique of Hegel's Philosophy of Right (1844)

The fact that labour is external to the worker, i.e., it does not belong to his intrinsic nature; that in his work, therefore he does not affirm himself but denies himself, does not feel content but unhappy, does not develop freely his physical and mental energy but mortifies his body and his mind. The worker therefore only feels himself outside his work, and in his work feels outside himself.