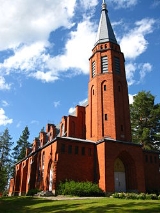 Encyclopedia
Parikkala is a municipality of Finland located in the province
Provinces of Finland
The state of Finland consisted of six provinces between the years 1997 and 2009. The provincial authority was part of the central government's executive branch, not directly elected. The system was created in 1634, and its makeup was changed drastically in 1997, when the number of the provinces...
of Southern Finland
Southern Finland
Southern Finland was a province of Finland from 1997 to 2010. It bordered the provinces of Western Finland and Eastern Finland. It also bordered the Gulf of Finland and Russia.- History :...
and is part of the South Karelia
South Karelia
South Karelia is a region of Finland. It borders to the regions of Kymenlaakso, Southern Savonia, North Karelia and to Russia. The term "South Karelia" might also be used to refer to the southern parts of the entire Karelia — the Region of South Karelia is termed "South" because it is the...
region
Regions of Finland
Finland consists of 19 regions called in Finnish and in Swedish. The regions are governed by regional councils, which serve as forums of cooperation for the municipalities of a region. The main tasks of the regions are regional planning and development of enterprise and education. In addition,...
. The municipality has a population of and covers an area of km2 of which km2 is water. The population density
Population density
Population density is a measurement of population per unit area or unit volume. It is frequently applied to living organisms, and particularly to humans...
is PD/km2.

The municipality is unilingually Finnish
Finnish language
Finnish is the language spoken by the majority of the population in Finland Primarily for use by restaurant menus and by ethnic Finns outside Finland. It is one of the two official languages of Finland and an official minority language in Sweden. In Sweden, both standard Finnish and Meänkieli, a...
.

A comprehensive school, one of the first rural schools in Karelia
Karelia
Karelia , the land of the Karelian peoples, is an area in Northern Europe of historical significance for Finland, Russia, and Sweden...
of Ladoga
Lake Ladoga
Lake Ladoga is a freshwater lake located in the Republic of Karelia and Leningrad Oblast in northwestern Russia, not far from Saint Petersburg. It is the largest lake in Europe, and the 14th largest lake by area in the world.-Geography:...
, was founded 1907. In the year 1910 was first three classed school building built, later on it expanded to consist a gymnasium, hall and kitchen. A Grand piano was provided in the hall of school, and Finnish artists Toivo Kuula
Toivo Kuula
Toivo Timoteus Kuula was a Finnish conductor and composer. He was born in the city of Vaasa , when Finland still was a Grand Duchy under Russian rule. He is known as a colorful and passionate portrayer of Finnish nature and people...
and Oskar Merikanto
Oskar Merikanto
Oskar Merikanto was a Finnish musician and composer.He was born to Swedish-speaking parents in Helsinki. His father, originally Frank Mattsson, changed the family name to sound more Finnish....
kept their concerts there when visiting Parikkala. Upper secondary school started in the year 1940 and first class graduated in the year 1943. The largest number of pupils was in the 50s, when over 500 pupils attended school there.

Parikkala is located in between the main railway
VR Group
VR or VR Group is a state-owned railway company in Finland. Formerly known as Suomen Valtion Rautatiet until 1922 and Valtionrautatiet / Statsjärnvägarna until 1995...
line from Helsinki
Helsinki
Helsinki is the capital and largest city in Finland. It is in the region of Uusimaa, located in southern Finland, on the shore of the Gulf of Finland, an arm of the Baltic Sea. The population of the city of Helsinki is , making it by far the most populous municipality in Finland. Helsinki is...
to Joensuu
Joensuu
Joensuu is a city and municipality in North Karelia in eastern Finland. It is located in the province of Eastern Finland and is part of North Karelia region. It was founded in 1848...
. A railway station is in the middle of Parikkala village center. Traveling time is about three and half hours from Helsinki, and all passenger trains stop at Parikkala. The city of Imatra
Imatra
Imatra is a town and municipality in eastern Finland, founded in 1948 around three industrial settlements near the Finnish–Russian border. In the course of the last 50 years, this amorphous group of settlements has grown into a modern industrial town dominated by Lake Saimaa, the Vuoksi River and...
is about 60 km south of Parikkala.