Encyclopedia
Pargali Ibrahim Pasha also known as Frenk Ibrahim Pasha (the "Westerner"), Makbul Ibrahim Pasha ("the Favorite"), and referred to him as Maktul Ibrahim Pasha ("the Executed") after his murder in the Topkapı Palace
Topkapi Palace
The Topkapı Palace is a large palace in Istanbul, Turkey, that was the primary residence of the Ottoman Sultans for approximately 400 years of their 624-year reign....
, was the first Grand Vizier
Grand Vizier
Grand Vizier, in Turkish Vezir-i Azam or Sadr-ı Azam , deriving from the Arabic word vizier , was the greatest minister of the Sultan, with absolute power of attorney and, in principle, dismissable only by the Sultan himself...
in the Ottoman Empire
Ottoman Empire
The Ottoman EmpireIt was usually referred to as the "Ottoman Empire", the "Turkish Empire", the "Ottoman Caliphate" or more commonly "Turkey" by its contemporaries...
appointed by Suleiman the Magnificent
Suleiman the Magnificent
Suleiman I was the tenth and longest-reigning Sultan of the Ottoman Empire, from 1520 to his death in 1566. He is known in the West as Suleiman the Magnificent and in the East, as "The Lawgiver" , for his complete reconstruction of the Ottoman legal system...
(r. 1520 to 1566). In 1523, he replaced Piri Mehmed Pasha, who had been appointed in 1518 by Süleyman's father, the preceding sultan Selim I
Selim I
Selim I, Yavuz Sultân Selim Khan, Hâdim-ül Haramain-ish Sharifain , nicknamed Yavuz "the Stern" or "the Steadfast", but often rendered in English as "the Grim" , was the Sultan of the Ottoman Empire from 1512 to...
, and remained in office for 13 years. He attained a level of authority and influence rivalled by only a handful of other Grand Viziers of the Empire, but in 1536 he was executed by the Sultan and his property was confiscated by the State. 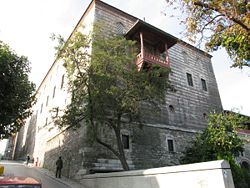 His magnificent palace still standing in İstanbul
Istanbul
Istanbul , historically known as Byzantium and Constantinople , is the largest city of Turkey. Istanbul metropolitan province had 13.26 million people living in it as of December, 2010, which is 18% of Turkey's population and the 3rd largest metropolitan area in Europe after London and...
is called Turkish and Islamic Arts Museum
Turkish and Islamic Arts Museum
The Turkish and Islamic Arts Museum is a museum located in Sultanahmet Square in Eminönü district of Istanbul, Turkey. Constructed in 1524, the building was formerly the palace of İbrahim Pasha, who was the first grand vizier to Suleiman the Magnificent....
. Built according to a design which is unmistakably defensive in concept (he had fearsome rivals), his palace is the only residence built by someone outside the Ottoman dynasty that deserves to be designated as a palace.
On the diplomatic front Ibrahim's work with Western Christendom was a complete success. Portraying himself as "the real power behind the Ottoman Empire", Ibrahim used a variety of tactics to negotiate favorable deals with the leaders of the Catholic powers. The Venetian
Republic of Venice
The Republic of Venice or Venetian Republic was a state originating from the city of Venice in Northeastern Italy. It existed for over a millennium, from the late 7th century until 1797. It was formally known as the Most Serene Republic of Venice and is often referred to as La Serenissima, in...
diplomats even referred to him as "Ibrahim the Magnificent", a play on Suleiman's usual sobriquet. In 1533, he convinced Charles V
Charles V, Holy Roman Emperor
Charles V was ruler of the Holy Roman Empire from 1519 and, as Charles I, of the Spanish Empire from 1516 until his voluntary retirement and abdication in favor of his younger brother Ferdinand I and his son Philip II in 1556.As...
to turn Hungary into an Ottoman vassal state. In 1535, he completed a monumental agreement with Francis I
Francis I of France
Francis I was King of France from 1515 until his death. During his reign, huge cultural changes took place in France and he has been called France's original Renaissance monarch...
that gave France favorable trade rights within the Ottoman empire in exchange for joint action against the Habsburgs. This agreement would set the stage for joint Franco-Ottoman naval maneuvers
Franco-Ottoman alliance
The Franco-Ottoman alliance, also Franco-Turkish alliance, was an alliance established in 1536 between the king of France Francis I and the Turkish ruler of the Ottoman Empire Suleiman the Magnificent. The alliance has been called "the first non-ideological diplomatic alliance of its kind between a...
, including the basing of the entire Ottoman fleet in southern France (in Toulon
Ottoman occupation of Toulon
The Ottoman wintering in Toulon occurred during the winter of 1543-44, following the Franco-Ottoman Siege of Nice, as part of the combined operations under the Franco-Ottoman alliance.-Wintering in Toulon:...
) during the winter of 1543.

A skilled commander of Suleiman's army
Military of the Ottoman Empire
The history of military of the Ottoman Empire can be divided in five main periods. The foundation era covers the years between 1300 and 1453 , the classical period covers the years between 1451 and 1606 , the reformation period covers the years between 1606 and 1826 ,...
, he eventually fell from grace after an imprudence committed during a campaign against the Persian Safavid empire, when he awarded himself a title including the word Sultan
Sultan
Sultan is a title with several historical meanings. Originally, it was an Arabic language abstract noun meaning "strength", "authority", "rulership", and "dictatorship", derived from the masdar سلطة , meaning "authority" or "power". Later, it came to be used as the title of certain rulers who...
(in particular, his adoption of the title serasker sultan was seen as a grave affront to Suleiman.) This incident launched a series of events which culminated in his execution in 1536, thirteen years after having been promoted as Grand Vizier. It has also been suggested by a number of sources that Ibrahim Pasha had been a victim of Hürrem Sultan's (Roxelana
Roxelana
Haseki Hürrem Sultan was the wife of Süleyman the Magnificent of the Ottoman Empire.-Names:Sixteenth-century sources are silent as to her maiden name, but much later traditions, for example Ukrainian folk traditions first recorded in the 19th century, give it as "Anastasia" , and Polish...
, the sultan's wife) rising influence on the sovereign, especially in view of his past support for the cause of Sehzade Mustafa
Sehzade Mustafa
Şehzade Mustafa Muhlisi , the prince of Manisa from 1533 to 1541 and the prince of Amasya from 1541 to 1553, was Suleiman the Magnificent's first born son by Mahidevran . He was the apparent heir to the Turkish throne.- Life :Mustafa experienced problems in his relations with his father...
, Suleiman I's first son and heir to the throne, who was later strangled to death by his father on 6 October 1553, through a series of plots put in motion by Roxelana.

Although he had long since converted into Islam he maintained some ties to his Christian roots, even bringing his Greek parents to live with him in the Ottoman capital.

Since Suleiman had sworn not to take Ibrahim's life during his reign, he acquired a fetva
Fatwa
A fatwā in the Islamic faith is a juristic ruling concerning Islamic law issued by an Islamic scholar. In Sunni Islam any fatwā is non-binding, whereas in Shia Islam it could be considered by an individual as binding, depending on his or her relation to the scholar. The person who issues a fatwā...
, which permitted him to take back the oath by building a mosque in Constantinople
Constantinople
Constantinople was the capital of the Roman, Eastern Roman, Byzantine, Latin, and Ottoman Empires. Throughout most of the Middle Ages, Constantinople was Europe's largest and wealthiest city.-Names:...
. He announced the fetva one week before Ibrahim's execution and dined alone with him seven times before the final move, so to give his life-long friend a chance to flee the country or to take the sultan's own life. It was later discovered in Ibrahim's letters that he was perfectly aware of the situation but nevertheless decided to stay true to Suleiman.

Suleiman later greatly regretted Ibrahim's execution and his character changed dramatically, to the point where he became completely secluded from the daily work of governing. His regrets are reflected in his poems, in which even after twenty years he continually stresses topics of friendship and of love and trust between friends and often hints on character traits similar to Ibrahim's.