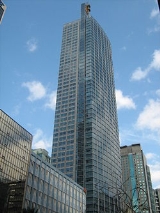 The building is located at Ayala Avenue
Ayala Avenue
Ayala Avenue is an avenue in Makati City in the Philippines. It is one of the busiest thoroughfares in Metro Manila, crossing through the heart of Makati's central business district. Because of the many businesses located on the avenue, Ayala Avenue is aptly nicknamed the Wall Street of the...
corner V.A. Rufino Street in Makati City
Makati City
The City of Makati is one of the 17 cities that make up Metro Manila, one of the most populous metropolitan areas in the world. Makati is the financial center of the Philippines and one of the major financial, commercial and economic hubs in Asia...
, right inside the Makati Central Business District. The stretch of Ayala Avenue where PBCom Tower is located also has the main branches of the following banks Quadrant Information Services Inc., Metrobank
Metropolitan Bank and Trust Company
The Metropolitan Bank and Trust Company , commonly known as Metrobank. It has a diverse offering of financial services, from regular banking to insurance. Metrobank is the second largest bank in the Philippines.-History:...
, Bank of the Philippine Islands
Bank of the Philippine Islands
Bank of the Philippine Islands is the oldest bank in the Philippines still in operation and is the country's third largest bank in terms of assets, the country's largest bank in terms of market capitalization, and the country's most profitable bank...
, Banco de Oro(Equitable PCI Towers I&IIEquitable Bank Tower), Export and Industry Bank
Export and Industry Bank
Export and Industry Bank , also known as Exportbank, is a commercial bank in the Philippines. It acquired Urban Bank in 2001 after the former collapsed due to its closure by the Bangko Sentral ng Pilipinas.-Subsidiaries and affiliates:...
. It houses international call centers such as Stream Global Services
Stream Global Services
Stream Global Services, Inc. is a global outsourcing solution provider, providing BPO services for Fortune 1000 clients , with more than 30,000 employees in 50 service centers of 22 countries in 50 contact centers; it currently manages more than 100 million voice, e-mail, and chat contacts a...
, Citibank
Citibank
Citibank, a major international bank, is the consumer banking arm of financial services giant Citigroup. Citibank was founded in 1812 as the City Bank of New York, later First National City Bank of New York...
, Convergys
Convergys
Convergys Corporation is a corporation based in Cincinnati, Ohio that provides solutions in customer management and information management. Customer management solutions include agent assisted, self-service and proactive care solutions tailored to the communications, financial services,...
, HSBC
HSBC
HSBC Holdings plc is a global banking and financial services company headquartered in Canary Wharf, London, United Kingdom. it is the world's second-largest banking and financial services group and second-largest public company according to a composite measure by Forbes magazine...
HDPP, IBM
IBM
International Business Machines Corporation or IBM is an American multinational technology and consulting corporation headquartered in Armonk, New York, United States. IBM manufactures and sells computer hardware and software, and it offers infrastructure, hosting and consulting services in areas...
Daksh, and ICT.

PBCom Tower was designed by local architectural firm GF & Partners Architects, in cooperation with international architects Skidmore, Owings & Merrill, LLP; and structural design was provided by local engineering company Aromin & Sy + Associates. Project and construction management services was provided by I.A. Campbell & Associates, a Philippine-based project management company, while construction works was done by Samsung Engineering & Construction's local branch Samsung Construction Company Philippines, Inc. Samsung is known as the builder of the world's tallest buildings, including the Petronas Twin Towers
Petronas Twin Towers
The Petronas Towers are skyscrapers and twin towers in Kuala Lumpur, Malaysia...
, Taipei 101
Taipei 101
Taipei 101 , formerly known as the Taipei World Financial Center, is a landmark skyscraper located in Xinyi District, Taipei, Taiwan. The building ranked officially as the world's tallest from 2004 until the opening of the Burj Khalifa in Dubai in 2010...
, and the Burj Khalifa .

Its exterior double-glazed, unitized curtain walls in aluminum frames, together with a monumental lighting effect, create a facade that reflects a fusion of art and function. Its interiors are an elegant interplay of glass, natural stone and metal. A landscraped garden in stepped podium also adds to the natural effect of the building's design. The building also utilizes tinted insulated vision glass in full height for the curtain walls to seal off heat and noise

The building is equipped with 17 high-speed tower lifts in 3 zones lift-group to ensure minimum waiting time; 4 shuttle lifts for parking and amenity floors; and 1 service elevator for all floors.

The building's parking facilities have a secure and integrated multi-level design with paging system and a drivers’ lounge.

The PBCom Tower has been designated by the Philippine Economic Zone Authority (PEZA) as one of only two certified Information Technology
Information technology
Information technology is the acquisition, processing, storage and dissemination of vocal, pictorial, textual and numerical information by a microelectronics-based combination of computing and telecommunications...
(IT) buildings in the country. IT companies occupying the PBCom Tower will enjoy special tax incentives and other privileges from the government.