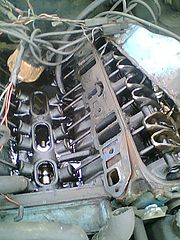 An overhead valve engine, also informally called pushrod engine or I-head engine, is a type of piston engine that places the camshaft
Camshaft
A camshaft is a shaft to which a cam is fastened or of which a cam forms an integral part.-History:An early cam was built into Hellenistic water-driven automata from the 3rd century BC. The camshaft was later described in Iraq by Al-Jazari in 1206. He employed it as part of his automata,...
within the cylinder block
Cylinder block
A cylinder block is an integrated structure comprising the cylinder of a reciprocating engine and often some or all of their associated surrounding structures...
(usually beside and slightly above the crankshaft
Crankshaft
The crankshaft, sometimes casually abbreviated to crank, is the part of an engine which translates reciprocating linear piston motion into rotation...
in a straight engine
Straight engine
Usually found in four- and six-cylinder configurations, the straight engine, or inline engine is an internal-combustion engine with all cylinders aligned in one row, with no offset...
or directly above the crankshaft in the V of a V engine
V engine
A V engine, or Vee engine is a common configuration for an internal combustion engine. The cylinders and pistons are aligned, in two separate planes or 'banks', so that they appear to be in a "V" when viewed along the axis of the crankshaft...
), and uses pushrods or rods to actuate rocker arm
Rocker arm
Generally referred to within the internal combustion engine of automotive, marine, motorcycle and reciprocating aviation engines, the rocker arm is a reciprocating lever that conveys radial movement from the cam lobe into linear movement at the poppet valve to open it...
s above the cylinder head
Cylinder head
In an internal combustion engine, the cylinder head sits above the cylinders on top of the cylinder block. It closes in the top of the cylinder, forming the combustion chamber. This joint is sealed by a head gasket...
to actuate the valves
Poppet valve
A poppet valve is a valve consisting of a hole, usually round or oval, and a tapered plug, usually a disk shape on the end of a shaft also called a valve stem. The shaft guides the plug portion by sliding through a valve guide...
. Lifters or tappet
Tappet
A tappet is the noise made by a worn cam follower, however the term is widely used to represent the cam follower itself. In mechanical engineering it is a projection which imparts a linear motion to some other component within an assembly...
s are located in the engine block between the camshaft and pushrods. The more modern overhead camshaft
Overhead camshaft
Overhead cam valvetrain configurations place the engine camshaft within the cylinder heads, above the combustion chambers, and drive the valves or lifters in a more direct manner compared to overhead valves and pushrods...
(OHC) design (still literally overhead valve) avoids the use of pushrods by putting the camshaft in the cylinder head.

In 1949, Oldsmobile
Oldsmobile
Oldsmobile was a brand of American automobile produced for most of its existence by General Motors. It was founded by Ransom E. Olds in 1897. In its 107-year history, it produced 35.2 million cars, including at least 14 million built at its Lansing, Michigan factory...
introduced the Rocket V8
Oldsmobile V8 engine
The Oldsmobile Rocket V8 was the first post-war OHV V8 at General Motors. Production started in 1949, with a new generation introduced in 1964. Like Pontiac, Olds continued building its own V8 engine family for decades, finally adopting the corporate Chevrolet 350 small-block and Cadillac Northstar...
. It was the first high-compression I-head design, and is the archetype for most modern pushrod engines. General Motors
General Motors
General Motors Company , commonly known as GM, formerly incorporated as General Motors Corporation, is an American multinational automotive corporation headquartered in Detroit, Michigan and the world's second-largest automaker in 2010...
is the world's largest pushrod engine producer, producing both V6 and V8 pushrod engines.

Few pushrod type engines remain in production outside of the United States market, and even American manufacturer Ford
Ford Motor Company
Ford Motor Company is an American multinational automaker based in Dearborn, Michigan, a suburb of Detroit. The automaker was founded by Henry Ford and incorporated on June 16, 1903. In addition to the Ford and Lincoln brands, Ford also owns a small stake in Mazda in Japan and Aston Martin in the UK...
no longer offers pushrod engines in new vehicles. This is in part a result of some countries passing laws to tax engines based on displacement, because displacement is somewhat related to the emissions and fuel efficiency of an automobile. This has given OHC engines a regulatory advantage in those countries, which resulted in few manufacturers wanting to design both OHV and OHC engines.

However, in 2002, Chrysler introduced a new pushrod engine: a 5.7 litre Hemi engine. The new Chrysler Hemi engine
Chrysler Hemi engine
The Chrysler Hemi engine, known by the trademark Hemi, is a series of V8 engines built by Chrysler with a hemispherical combustion chamber. Three different types of Hemi engines have been built by Chrysler for automobiles: the first from 1951–1958, the second from 1964–1971, and the third...
presents advanced features such as variable displacement
Variable displacement
Variable displacement is an automobile engine technology that allows the engine displacement to change, usually by deactivating cylinders, for improved fuel economy. The technology is primarily used in large, multi-cylinder engines...
technology and has been a popular option with buyers. The Hemi was on the Ward's 10 Best Engines
Ward's 10 Best Engines
Ward's 10 Best Engines is an annual list of the ten "best" automobile engines available in the U.S. market, that are selected by Ward's AutoWorld magazine. The list was started in 1994, and has been drawn every year since then....
list for 2003 through 2007. Chrysler also produced the world's first production variable valve OHV engine with independent intake and exhaust phasing. The system is called CamInCam, and was first used in the 600 hp SRT-10 engine for the 2008 Dodge Viper
Dodge Viper
The first prototype was tested in January 1989. It debuted in 1991 with two pre-production models as the pace car for the Indianapolis 500 when Dodge was forced to substitute it in place of the Japanese-built Stealth because of complaints from the United Auto Workers, and went on sale in January...
.

The original overhead valve or OHV piston engine was developed by the Scottish-American David Dunbar Buick
David Dunbar Buick
David Dunbar Buick was a Scottish-born Detroit inventor, best known for founding the Buick Motor Company...
. It employs pushrod-actuated valves parallel
Parallel (geometry)
Parallelism is a term in geometry and in everyday life that refers to a property in Euclidean space of two or more lines or planes, or a combination of these. The assumed existence and properties of parallel lines are the basis of Euclid's parallel postulate. Two lines in a plane that do not...
to the piston
Piston
A piston is a component of reciprocating engines, reciprocating pumps, gas compressors and pneumatic cylinders, among other similar mechanisms. It is the moving component that is contained by a cylinder and is made gas-tight by piston rings. In an engine, its purpose is to transfer force from...
s, and this is still in use today. This contrasts with previous designs which made use of side valves
Flathead engine
A flathead engine is an internal combustion engine with valves placed in the engine block beside the piston, instead of in the cylinder head, as in an overhead valve engine...
and sleeve valve
Sleeve valve
The sleeve valve is a type of valve mechanism for piston engines, distinct from the usual poppet valve. Sleeve-valve engines saw use in a number of pre-World War II luxury cars and in USA in the Willys-Knight car and light truck...
s.

Some specific problems that remain with overhead valve (OHV) engines:
Modern OHV engines are usually limited to about 6,000 to 8,000 revolutions per minute
Revolutions per minute
Revolutions per minute is a measure of the frequency of a rotation. It annotates the number of full rotations completed in one minute around a fixed axis...
(rpm) in production cars, and 9,000 rpm to 10,500 rpm in racing applications. In contrast, many modern DOHC engines may have rev limits from 6,000 rpm to 9,000 rpm in road car engines, and in excess of 20,000 rpm (though now limited to 18,000 rpm) in current Formula One
Formula One
Formula One, also known as Formula 1 or F1 and referred to officially as the FIA Formula One World Championship, is the highest class of single seater auto racing sanctioned by the Fédération Internationale de l'Automobile . The "formula" designation in the name refers to a set of rules with which...
race engines using pneumatic valve springs. High-revving pushrod engines are normally solid (mechanical) lifter designs, flat and roller. In 1969, Chevrolet
Chevrolet
Chevrolet , also known as Chevy , is a brand of vehicle produced by General Motors Company . Founded by Louis Chevrolet and ousted GM founder William C. Durant on November 3, 1911, General Motors acquired Chevrolet in 1918...
offered a Corvette and a Camaro model with a solid lifter cam pushrod V8 (the ZL-1) that could rev to 8,000 rpm. The Volvo B18 and B20
Volvo B18 engine
This B18 was a straight-4 automobile engine produced by Volvo Cars from 1961 through 1968. The five-bearing, cam-in-block engine, had OHV overhead valves operated by pushrods. The B18 is quite different in design from its predecessor, the three-bearing B16....
engines can rev to more than 7,000 rpm with their solid lifter camshaft. However, the LS7 of the C6 Corvette Z06 is the first production hydraulic roller cam pushrod engine to have a redline of 7,100 rpm.

The Indy 500 race in Indianapolis
Indianapolis
Indianapolis is the capital of the U.S. state of Indiana, and the county seat of Marion County, Indiana. As of the 2010 United States Census, the city's population is 839,489. It is by far Indiana's largest city and, as of the 2010 U.S...
each year bears some vestige of its original purpose as a proving ground for automobile manufacturers, in that it once gave an advantage in engine displacement to engines based on stock production engines, as distinct from out-and-out racing engines designed from scratch. One factor in identifying production engines from racing engines was the use of pushrods, rather than the overhead camshafts used on most modern racing engines; Mercedes-Benz realized before the 1994 race
1994 Indianapolis 500
The 78th Indianapolis 500 was held at the Indianapolis Motor Speedway on Sunday, May 29, 1994. Al Unser, Jr. won from the pole position, his second Indy 500 victory. Much to the surprise of competitors, media, and fans, Marlboro Team Penske arrived at the Speedway with a brand new, secretly-built...
that they could very carefully tailor a purpose-built racing engine using pushrods to meet the requirements of the Indy rules and take advantage of the 'production based' loophole, but still design it to be a state of the art racing engine in all other ways, without any of the drawbacks of a real production-based engine. They entered this engine in 1994, and because of the higher boost pressure and larger displacement that the "loophole" allowed pushrod engines, dominated the race. After the race, the rules were changed in order to reduce the amount of boost pressure supplied by the turbocharger
Turbocharger
A turbocharger, or turbo , from the Greek "τύρβη" is a centrifugal compressor powered by a turbine that is driven by an engine's exhaust gases. Its benefit lies with the compressor increasing the mass of air entering the engine , thereby resulting in greater performance...
. This amount was still 13% higher than what was allowed for the OHC engines, the engine was also allowed to retain its considerable displacement advantage. The inability of the engine to produce competitive power output after this change caused it to become obsolete after just the one race. Mercedes-Benz knew this beforehand, deciding that the cost of engine development was worth one win at Indianapolis.