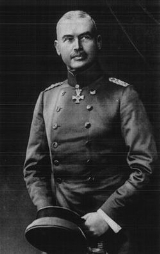 Encyclopedia
Generalleutnant Otto Liman von Sanders (February 17, 1855 - August 22, 1929) was a German
Germany
Germany , officially the Federal Republic of Germany , is a federal parliamentary republic in Europe. The country consists of 16 states while the capital and largest city is Berlin. Germany covers an area of 357,021 km2 and has a largely temperate seasonal climate...
general who served as adviser and military commander for the Ottoman Empire
Ottoman Empire
The Ottoman EmpireIt was usually referred to as the "Ottoman Empire", the "Turkish Empire", the "Ottoman Caliphate" or more commonly "Turkey" by its contemporaries...
during World War I
World War I
World War I , which was predominantly called the World War or the Great War from its occurrence until 1939, and the First World War or World War I thereafter, was a major war centred in Europe that began on 28 July 1914 and lasted until 11 November 1918...
.

He was born in Stolp in Pomerania
Pomerania
Pomerania is a historical region on the south shore of the Baltic Sea. Divided between Germany and Poland, it stretches roughly from the Recknitz River near Stralsund in the West, via the Oder River delta near Szczecin, to the mouth of the Vistula River near Gdańsk in the East...
region in Germany
Germany
Germany , officially the Federal Republic of Germany , is a federal parliamentary republic in Europe. The country consists of 16 states while the capital and largest city is Berlin. Germany covers an area of 357,021 km2 and has a largely temperate seasonal climate...
. His father was a Jewish nobleman. Like many other Prussians from aristocratic families, he joined the military and rose through the ranks to Lieutenant General. Like several Prussian generals before him (e.g., Von Moltke
Helmuth von Moltke the Elder
Helmuth Karl Bernhard Graf von Moltke was a German Field Marshal. The chief of staff of the Prussian Army for thirty years, he is regarded as one of the great strategists of the latter 19th century, and the creator of a new, more modern method of directing armies in the field...
and Baron von der Goltz
Colmar Freiherr von der Goltz
Wilhelm Leopold Colmar Freiherr von der Goltz also known as Goltz Pasha, was a Prussian Field Marshal and military writer.-Military career:...
), he was appointed the head of a German military mission to the Ottoman Empire
Ottoman Empire
The Ottoman EmpireIt was usually referred to as the "Ottoman Empire", the "Turkish Empire", the "Ottoman Caliphate" or more commonly "Turkey" by its contemporaries...
in 1913. For nearly eighty years, the Ottoman Empire had been trying to modernize their army along European lines. Liman von Sanders would be the last German to attempt this task.

Liman had little time to organize the defences, but he had two things in his favor. First, the Ottoman 5th Army was the best army they had, some 84,000 well-equipped soldiers in six divisions. Second, he was helped by poor Allied leadership. Instead of using their massive fleet to force a passage through the straits to Istanbul, the British and French admirals called for ground troops to capture the Dardanelles peninsula so their battleships could sail on into the Sea of Marmara
Sea of Marmara
The Sea of Marmara , also known as the Sea of Marmora or the Marmara Sea, and in the context of classical antiquity as the Propontis , is the inland sea that connects the Black Sea to the Aegean Sea, thus separating Turkey's Asian and European parts. The Bosphorus strait connects it to the Black...
unmolested. Liman had just over a month to prepare. Then, on 23 April 1915, the British landed a major force at Cape Helles
Cape Helles
Cape Helles is the rocky headland at the south-westernmost tip of the Gallipoli peninsula, Turkey. It was the scene of heavy fighting between Turkish and British troops during the landing at Cape Helles at the beginning of the Gallipoli Campaign in 1915....
. One of Liman's best decisions during this time was to promote Mustafa Kemal (later known as Atatürk) to commander of the 19th division. Kemal's division literally saved the day for the Ottomans. His troops marched up on the day of the invasion and occupied the ridge line above the ANZAC
Australian and New Zealand Army Corps
The Australian and New Zealand Army Corps was a First World War army corps of the Mediterranean Expeditionary Force that was formed in Egypt in 1915 and operated during the Battle of Gallipoli. General William Birdwood commanded the corps, which comprised troops from the First Australian Imperial...
landing site, just as the ANZAC troops were moving up the slope themselves. Kemal recognized the danger and personally made sure his troops held the ridge line. They were never forced off despite constant attacks for the next five months.

From April to November 1915 (when the decision to evacuate was made), Liman had to fight off numerous attacks against his defensive positions. The British tried another landing at Suvla Bay, but this also was halted by the Ottoman defenders. The only bright spot for the British in this entire operation was that they managed to evacuate their positions without much loss. However, this battle was a major victory for the Ottoman army and some of the credit is given to the generalship of Liman von Sanders.

Early in 1915, the previous head of the German military mission to the Ottoman Empire, Baron von der Goltz
Colmar Freiherr von der Goltz
Wilhelm Leopold Colmar Freiherr von der Goltz also known as Goltz Pasha, was a Prussian Field Marshal and military writer.-Military career:...
arrived in Istanbul as military advisor to the (essentially powerless) Sultan
Sultan
Sultan is a title with several historical meanings. Originally, it was an Arabic language abstract noun meaning "strength", "authority", "rulership", and "dictatorship", derived from the masdar سلطة , meaning "authority" or "power". Later, it came to be used as the title of certain rulers who...
, Mehmed V
Mehmed V
Mehmed V Reshad was the 35th Ottoman Sultan. He was the son of Sultan Abdülmecid I. He was succeeded by his half-brother Mehmed VI.-Birth:...
. The old Baron did not get along with Liman von Sanders and did not like the three Pashas (Enver Pasha, Cemal Pasha and Talat
Mehmed Talat Pasha
Talaat Pasha Talaat Pasha Talaat Pasha (also transliterated as Tala'at Pasha or Talat Pasha was one of the leaders of the Committee of Union and Progress that controlled the Ottoman Empire during the First World War.He was born in Edirne Vilayet. He was of Pomak descent...
) who ran the Ottoman Empire
Ottoman Empire
The Ottoman EmpireIt was usually referred to as the "Ottoman Empire", the "Turkish Empire", the "Ottoman Caliphate" or more commonly "Turkey" by its contemporaries...
during the war. The Baron proposed some major offensives against the British, but these proposals came to nothing in the face of Allied offensives against the Ottomans on three fronts (the Dardanelles, the Caucusus Front
Caucasus Campaign
The Caucasus Campaign comprised armed conflicts between the Ottoman Empire and the Russian Empire, later including Azerbaijan, Armenia, Central Caspian Dictatorship and the UK as part of the Middle Eastern theatre or alternatively named as part of the Caucasus Campaign during World War I...
, and the newly opened Mesopotamian Front
Mesopotamian Campaign
The Mesopotamian campaign was a campaign in the Middle Eastern theatre of World War I fought between the Allies represented by the British Empire, mostly troops from the Indian Empire, and the Central Powers, mostly of the Ottoman Empire.- Background :...
). Liman was rid of the old Baron when Enver Pasha sent him to fight the British in Mesopotamia in October 1915. (Goltz died there six months later just before the British army at Kut
Siege of Kut
The siege of Kut Al Amara , was the besieging of 8,000 strong British-Indian garrison in the town of Kut, 100 miles south of Baghdad, by the Ottoman Army. Its known also as 1st Battle of Kut. In 1915, its population was around 6,500...
surrendered).

In 1918, the last year of the war, Liman von Sanders took over command of the Ottoman army during the Sinai and Palestine Campaign
Sinai and Palestine Campaign
The Sinai and Palestine Campaigns took place in the Middle Eastern Theatre of World War I. A series of battles were fought between British Empire, German Empire and Ottoman Empire forces from 26 January 1915 to 31 October 1918, when the Armistice of Mudros was signed between the Ottoman Empire and...
, replacing the German General Erich von Falkenhayn
Erich von Falkenhayn
Erich von Falkenhayn was a German soldier and Chief of the General Staff during World War I. He became a military writer after World War I.-Early life:...
who had been defeated by British General Allenby
Edmund Allenby, 1st Viscount Allenby
Field Marshal Edmund Henry Hynman Allenby, 1st Viscount Allenby GCB, GCMG, GCVO was a British soldier and administrator most famous for his role during the First World War, in which he led the Egyptian Expeditionary Force in the conquest of Palestine and Syria in 1917 and 1918.Allenby, nicknamed...
at the end of 1917.

Liman was hampered by the significant decline in power of the Ottoman army. His forces were unable to do anything more than occupy defensive positions and wait for the British attack. The attack was a long time in coming, but when General Allenby finally unleashed his army, the entire Ottoman army was destroyed in a week of fighting (see the Battle of Megiddo
Battle of Megiddo (1918)
The Battle of Megiddo took place between 19 September and 1 October 1918, in what was then the northern part of Ottoman Palestine and parts of present-day Syria and Jordan...
). In the rout, Liman was nearly captured by British soldiers.

After the war ended he was arrested in Malta
Malta
Malta , officially known as the Republic of Malta , is a Southern European country consisting of an archipelago situated in the centre of the Mediterranean, south of Sicily, east of Tunisia and north of Libya, with Gibraltar to the west and Alexandria to the east.Malta covers just over in...
in February 1919 on charges of having committed war crimes, but he was released six months later. He retired from the German army that year.

In 1927 he published a book he had written in captivity in Malta about his experiences before and during the war (there is an English translation). Two years later Otto Liman von Sanders died in Munich
Munich
Munich The city's motto is "" . Before 2006, it was "Weltstadt mit Herz" . Its native name, , is derived from the Old High German Munichen, meaning "by the monks' place". The city's name derives from the monks of the Benedictine order who founded the city; hence the monk depicted on the city's coat...
at the age of seventy-four.