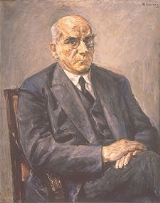 Encyclopedia
This article is about the Prime Minister of Prussia. For the German Communist and once the Comintern
Comintern
The Communist International, abbreviated as Comintern, also known as the Third International, was an international communist organization initiated in Moscow during March 1919...
military adviser to the Chinese Communist revolution see Otto Braun (Li De)
Otto Braun (Li De)
Otto Braun was a German Communist with a long and varied career.His most significant role was as a Comintern agent sent to China in 1934, to advise the Communist Party of China on military strategy during the Chinese Civil War...
.

Originally from Königsberg
Königsberg
Königsberg was the capital of East Prussia from the Late Middle Ages until 1945 as well as the northernmost and easternmost German city with 286,666 inhabitants . Due to the multicultural society in and around the city, there are several local names for it...
, East Prussia
East Prussia
East Prussia is the main part of the region of Prussia along the southeastern Baltic Coast from the 13th century to the end of World War II in May 1945. From 1772–1829 and 1878–1945, the Province of East Prussia was part of the German state of Prussia. The capital city was Königsberg.East Prussia...
, Braun became a leader of the Social Democratic Party in that province, and in 1913 was elected to the Prussian House of Representatives. In 1919, he was elected to the Weimar National Assembly
Weimar National Assembly
The Weimar National Assembly governed Germany from February 6, 1919 to June 6, 1920 and drew up the new constitution which governed Germany from 1919 to 1933, technically remaining in effect even until the end of Nazi rule in 1945...
. He became Prime Minister of Prussia, a position in which he served almost continually between 1920 and 1932. He also became the Social Democratic presidential candidate in the first round of presidential elections in 1925, coming in second. He then withdrew his candidacy during the run-off in order to help the Centre Party
Centre Party (Germany)
The German Centre Party was a Catholic political party in Germany during the Kaiserreich and the Weimar Republic. Formed in 1870, it battled the Kulturkampf which the Prussian government launched to reduce the power of the Catholic Church...
's Wilhelm Marx
Wilhelm Marx
Wilhelm Marx was a German lawyer, Catholic politician and a member of the Centre Party. He was Chancellor of the German Reich twice, from 1923 to 1925 and again from 1926 to 1928, and also served briefly as minister president of Prussia in 1925, during the Weimar Republic.-Life:Born in Cologne to...
defeat Paul von Hindenburg
Paul von Hindenburg
Paul Ludwig Hans Anton von Beneckendorff und von Hindenburg , known universally as Paul von Hindenburg was a Prussian-German field marshal, statesman, and politician, and served as the second President of Germany from 1925 to 1934....
, who had not stood in the first round. Marx was eventually defeated by Hindenburg.
Braun's coalition government, one of the strongest bastions of the Weimar Republic, lost its majority in the April 1932 Prussian elections, but remained as a caretaker government as the Landtag, in which the Communist
Communist Party of Germany
The Communist Party of Germany was a major political party in Germany between 1918 and 1933, and a minor party in West Germany in the postwar period until it was banned in 1956...
s and National Socialists between them had a majority, could not agree to form a new government. Braun's government was deposed in the Preußenschlag
Preußenschlag
In 1932, the Preußenschlag, or "Prussian coup", was one of the major steps towards the end of the German inter-war democracy, which would later greatly facilitate the "Gleichschaltung" of Germany after Adolf Hitler's rise to power...
of July 1932, when Germany's chancellor Franz von Papen
Franz von Papen
Lieutenant-Colonel Franz Joseph Hermann Michael Maria von Papen zu Köningen was a German nobleman, Roman Catholic monarchist politician, General Staff officer, and diplomat, who served as Chancellor of Germany in 1932 and as Vice-Chancellor under Adolf Hitler in 1933–1934...
assumed direct Reich control of Prussia's administration. Braun, however, remained de jure Prime Minister and continued to represent the state of Prussia in the Reichsrat
Reichsrat (Germany)
The Reichsrat was one of the two legislative bodies in Germany under the Weimar constitution, the other one being the Reichstag. After the end of German monarchy and the founding of the Weimar Republic in 1919, the Reichsrat replaced the Bundesrat as the representation of the various German...
until January 1933, when Papen became Prime Minister for two months. Hermann Göring
Hermann Göring
Hermann Wilhelm Göring, was a German politician, military leader, and a leading member of the Nazi Party. He was a veteran of World War I as an ace fighter pilot, and a recipient of the coveted Pour le Mérite, also known as "The Blue Max"...
then held the office for the next twelve years until 1945. As an opponent of the Nazi regime, Braun decided to leave Germany and emigrated to Switzerland
Switzerland
Switzerland name of one of the Swiss cantons. ; ; ; or ), in its full name the Swiss Confederation , is a federal republic consisting of 26 cantons, with Bern as the seat of the federal authorities. The country is situated in Western Europe,Or Central Europe depending on the definition....
after Adolf Hitler
Adolf Hitler
Adolf Hitler was an Austrian-born German politician and the leader of the National Socialist German Workers Party , commonly referred to as the Nazi Party). He was Chancellor of Germany from 1933 to 1945, and head of state from 1934 to 1945...
attained
Machtergreifung
Machtergreifung is a German word meaning "seizure of power". It is normally used specifically to refer to the Nazi takeover of power in the democratic Weimar Republic on 30 January 1933, the day Hitler was sworn in as Chancellor of Germany, turning it into the Nazi German dictatorship.-Term:The...
the office of Chancellor in January 1933.

At the end of the Second World War, Braun approached the allies to reinstate the previous democratic Prussian government, but they were not receptive to his proposition due to their earlier decision
Potsdam Conference
The Potsdam Conference was held at Cecilienhof, the home of Crown Prince Wilhelm Hohenzollern, in Potsdam, occupied Germany, from 16 July to 2 August 1945. Participants were the Soviet Union, the United Kingdom, and the United States...
to abolish the state of Prussia and divide East Prussia between Poland and the Soviet Union. Braun died in exile in Locarno
Locarno
Locarno is the capital of the Locarno district, located on the northern tip of Lake Maggiore in the Swiss canton of Ticino, close to Ascona at the foot of the Alps. It has a population of about 15,000...
in 1955.
The source of this article is wikipedia, the free encyclopedia.  The text of this article is licensed under the GFDL.