Encyclopedia
The Otavi Mining and Railway Company (Otavi Minen- und Eisenbahn-Gesellschaft or OMEG) was a railway and mining company in German South-West Africa
German South-West Africa
German South West Africa was a colony of Germany from 1884 until 1915, when it was taken over by South Africa and administered as South West Africa, finally becoming Namibia in 1990...
(today's Namibia
Namibia
Namibia, officially the Republic of Namibia , is a country in southern Africa whose western border is the Atlantic Ocean. It shares land borders with Angola and Zambia to the north, Botswana to the east and South Africa to the south and east. It gained independence from South Africa on 21 March...
). It was founded on 6 April 1900 in Berlin
Berlin
Berlin is the capital city of Germany and is one of the 16 states of Germany. With a population of 3.45 million people, Berlin is Germany's largest city. It is the second most populous city proper and the seventh most populous urban area in the European Union...
with the Disconto-Gesellschaft and the South West Africa Company as major shareholders.

OMEG built the longest gauge railway in the world extending 567 kilometres (352.3 mi) from Swakopmund
Swakopmund
Swakopmund is a city on the coast of northwestern Namibia, west of Windhoek, Namibia's capital. It is the capital of the Erongo administrative district. As a seaside resort, the weather is cooler here in December to January so the territorial administration moves to Swakopmund for these months...
on the Atlantic
Atlantic Ocean
The Atlantic Ocean is the second-largest of the world's oceanic divisions. With a total area of about , it covers approximately 20% of the Earth's surface and about 26% of its water surface area...
coast to the mines
Mining
Mining is the extraction of valuable minerals or other geological materials from the earth, from an ore body, vein or seam. The term also includes the removal of soil. Materials recovered by mining include base metals, precious metals, iron, uranium, coal, diamonds, limestone, oil shale, rock...
of Tsumeb
Tsumeb
Tsumeb is a city of 15,000 inhabitants and the largest town in Oshikoto region in northern Namibia. Tsumeb is the home of the world-famous Tsumeb mine, and the "gateway to the north" of Namibia. It is the closest town to the Etosha National Park...
. Construction began in 1903 and reached Tsumeb three years later. The first 225 kilometres (139.8 mi) of railway required 110 steel bridges to cross deeply eroded gullies through sparsely vegetated arid terrain. Most were deck plate girders. Construction coincided with the Herero and Namaqua Genocide
Herero and Namaqua Genocide
The Herero and Namaqua Genocide is considered to have been the first genocide of the 20th century. It took place between 1904 and 1907 in German South-West Africa , during the scramble for Africa...
. Delays resulted from labor shortages and military feldbahn
Feldbahn
A Feldbahn is the German term for a narrow gauge railway, usually not open to the public, which in its simplest form provides for the transportation of agricultural, forestry and industrial raw materials such as wood, peat, stone, earth and sand...
operations. A 91-kilometer branch was completed in 1908 from Otavi
Otavi
Otavi is a town of 4,000 inhabitants in the Otjozondjupa Region of central Namibia. It is the district capital of the Otavi electoral constituency. Most of the area is dolomitic and the district was in the past renowned for its mineral wealth...
to mines near Grootfontein
Grootfontein
Grootfontein is a city of 14,200 inhabitants in the Otjozondjupa Region of central Namibia. It is one of the three towns in the Otavi Triangle, situated on the B8 national road that leads from Windhoek to the Caprivi Strip...
. 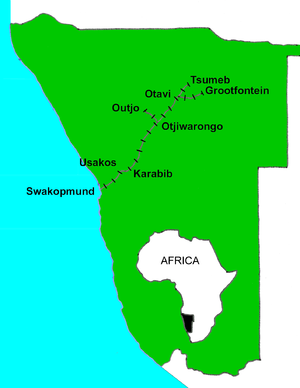 German troops surrendered following defeat at Otavi in July, 1915; and service was re-established over the remaining 60-centimeter gauge line from the railway shops at Usakos with freight transfer facilities at Karabib. Two Henschel & Sohn 4-6-2 locomotives built in 1914 had disappeared during the war; but Baldwin Locomotive Works
Baldwin Locomotive Works
The Baldwin Locomotive Works was an American builder of railroad locomotives. It was located in Philadelphia, Pennsylvania, originally, and later in nearby Eddystone, Pennsylvania. Although the company was very successful as a producer of steam locomotives, its transition to the production of...
delivered a 4-6-2 in 1916. A coach converted for meal service from 1916 to 1931 is believed to be the only 2 foot (0.6096 m) gauge dining car
Dining car
A dining car or restaurant carriage , also diner, is a railroad passenger car that serves meals in the manner of a full-service, sit-down restaurant....
ever operated. Six more Henschel & Sohn 2-8-2 were delivered in 1922. These locomotives were designated South African Railways (SAR) NG5 class when the Otavi line was nationalized in 1923.

Train service was interrupted by a locust
Locust
Locusts are the swarming phase of short-horned grasshoppers of the family Acrididae. These are species that can breed rapidly under suitable conditions and subsequently become gregarious and migratory...
infestation in 1924 until steam nozzles were installed on locomotives to sweep the insects off the rails before their crushed bodies could reduce traction under the locomotive wheels.