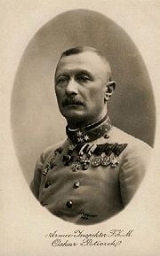 Encyclopedia
Oskar Potiorek was an Austria
Austria-Hungary
Austria-Hungary , more formally known as the Kingdoms and Lands Represented in the Imperial Council and the Lands of the Holy Hungarian Crown of Saint Stephen, was a constitutional monarchic union between the crowns of the Austrian Empire and the Kingdom of Hungary in...
n general
General
A general officer is an officer of high military rank, usually in the army, and in some nations, the air force. The term is widely used by many nations of the world, and when a country uses a different term, there is an equivalent title given....
who served as the Austro-Hungarian governor of Bosnia and Herzegovina between 1911 and 1914. Potiorek was a co-passenger in the car carrying Archduke Franz Ferdinand of Austria
Archduke Franz Ferdinand of Austria
Franz Ferdinand was an Archduke of Austria-Este, Austro-Hungarian and Royal Prince of Hungary and of Bohemia, and from 1889 until his death, heir presumptive to the Austro-Hungarian throne. His assassination in Sarajevo precipitated Austria-Hungary's declaration of war against Serbia...
and his wife Countess Sophie Chotek when they were assassinated in Sarajevo on 28 June 1914, in an event which is seen as the start of World War I
World War I
World War I , which was predominantly called the World War or the Great War from its occurrence until 1939, and the First World War or World War I thereafter, was a major war centred in Europe that began on 28 July 1914 and lasted until 11 November 1918...
.

General Potiorek had invited Archduke Franz Ferdinand and Sophie to watch his troops on maneuvers. The royal couple arrived in Sarajevo
Sarajevo
Sarajevo |Bosnia]], surrounded by the Dinaric Alps and situated along the Miljacka River in the heart of Southeastern Europe and the Balkans....
by train and went to Philipovic army camp where Franz Ferdinand performed a brief review of the troops. Potiorek was waiting to take the royal party to the City Hall for the official reception. Potiorek was in the second car with Lieutenant Colonel and the royal couple. At 10:10, when the six car motorcade passed the central police station, Nedeljko Cabrinovic
Nedeljko Cabrinovic
Nedeljko Čabrinović was a member of the nationalist Young Bosnia movement, and one of a group of seven who intended to assassinate Franz Ferdinand, Archduke of Austria during his announced visit to Sarajevo.Born in Sarajevo, Čabrinović spent many of his post-school years as a handyman, before...
hurled a hand grenade
Hand grenade
A hand grenade is any small bomb that can be thrown by hand. Hand grenades are classified into three categories, explosive grenades, chemical and gas grenades. Explosive grenades are the most commonly used in modern warfare, and are designed to detonate after impact or after a set amount of time...
at the archduke's car. The driver accelerated when he saw the object flying towards the car and the grenade exploded under the wheel of the next car.

After attending the official reception at the City Hall, Franz Ferdinand asked about visiting the members of his party that had been wounded by the bomb. A member of the archduke's staff, Baron Morsey, suggested this might be dangerous, but Potiorek, who was responsible for the safety of the royal party, replied, "Do you think Sarajevo is full of assassins?"

In order to avoid the city centre, Potiorek decided that the royal car should travel straight along the Appel Quay (now the E761 road) to the Sarajevo Hospital. However, Potiorek forgot to tell the driver, Leopold Loyka
Leopold Loyka
Leopold Lojka was the chauffeur of the car carrying Austro-Hungarian Archduke Franz Ferdinand at the point of Ferdinand's assassination in Sarajevo in 1914....
, about this decision. On the way to the hospital, Loyka took a right turn into Franz Joseph Street at the 43°51′27.61"N 18°25′43.89"E, where one of the conspirators, Gavrilo Princip
Gavrilo Princip
Gavrilo Princip was the Bosnian Serb who assassinated Archduke Franz Ferdinand of Austria and his wife, Sophie, Duchess of Hohenberg, in Sarajevo on 28 June 1914...
, was standing on the corner at the time. When the driver began to back up the car, the assassin stepped forward, drew his gun, and at a distance of about five feet, fired several times into the car. Franz Ferdinand was hit in the neck and Sophie in the abdomen. Others in the car were not injured.

No evidence has been found to support suggestions that the Archduke's low-security visit to Sarajevo was arranged by elements within Austro-Hungarian official circles with the intention of exposing him to the risk of assassination so as to remove a potentially troublesome royal personage from the scene.

Princip later claimed that the bullet that killed Sophie was meant for Potiorek. It is speculated that this "survivor's guilt" led Potiorek to take charge of the Austro-Hungarian army and lead the first mission to "punish" Serbia. He was reportedly very zealous in his actions (multiple times he claimed "I was spared at Sarajevo so that I may die avenging it!") but was apparently an inept commander. After the textbook military disasters at the Battle of Cer
Battle of Cer
The Battle of Cer also known as Battle of Jadar was one of the first battles of World War I, it also marked the first Allied victory in the war. The battle was fought between the Austro-Hungarian Army and Serbian forces. The results improved Serbian standing in the Alliance...
and the Battle of Kolubara
Battle of Kolubara
The Battle of Kolubara was a major victory of Serbia over the invading Austro-Hungarian armies during World War I. The invaders were routed, and driven back across the Serbian border....
, he was removed from command, a choice that reportedly made him suicidal.