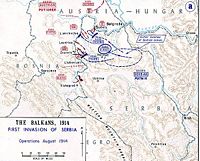 In the opening stages of the First World War, the Austro-Hungarian Army Group Balkans, under the command of General Oskar Potiorek, pushed into northwestern Serbia across the Sava and Drina
Drina
The Drina is a 346 kilometer long river, which forms most of the border between Bosnia and Herzegovina and Serbia. It is the longest tributary of the Sava River and the longest karst river in the Dinaric Alps which belongs to the Danube river watershed...
rivers. The city of Šabac
Šabac
Šabac is a city and municipality in western Serbia, along the Sava river, in the historic region of Mačva. It is the administrative center of the Mačva District. The city has a population of 52,822 , while population of the municipality is 115,347...
fell. Following the expansion of bridgeheads, most elements of the 2nd and 5th armies successfully crossed into Serbia by 12 August. Potiorek's own 6th army was still concentrating further south and was in no position to begin a large operation at this time, so the brunt of the fighting in the following days was on the 5th Army. According to Potiorek's plan, it was to attack in the general direction of Valjevo
Valjevo
Valjevo is a city and municipality located in western Serbia. It is the center of the Kolubara District, which includes five other smaller municipalities with a total population of almost 180,000 people...
immediately after the crossing and take the city in five days.

Reports of the Austrian incursion reached the Serbian staff during the day. It was clear that a major operation had begun, but Field Marshal Putnik still had not completely abandoned his view that the main Austrian thrust would come from the north, concentrated on the Morava river valley. It took some time until his assistants, general Mišić, and head of Operations, colonel Živko Pavlović convinced him to take decisive action.

Along with the direct military pressure of Austria-Hungary, Serbia was pressed to take an offensive stance by its Allies, at the time waging difficult battles in northwestern Europe. The Serbian Staff replied that its units were already on the offensive against the Austrian bridgeheads. The Serbian Second Army, under the command of General Stepanović advanced towards Cer
Cer (mountain)
Cer is a mountain in western Serbia, 30 kilometers from Šabac, 100 kilometers west of Belgrade. The highest peak is 689 m high.During World War I, the Battle of Cer was fought on Cer, in which Serbian forces defeated Austria-Hungary....
, the Šumadija Division towards Šabac and the Cavalry Division towards Mačva
Macva
Mačva is a geographical region in Serbia, mostly situated in the northwest of Central Serbia. It is located in a fertile plain between the Sava and Drina rivers. The chief town of this region is Šabac. The modern Mačva District of Serbia is named after the region, although the region of Mačva...
. On the left flank, the Third Army, under the command of General Pavle Jurišić Šturm
Pavle Jurišic Šturm
Pavle Jurišić Šturm was a Serbian general of Sorbian origin who commanded the Serbian 3rd Army in the First World War....
, entered the battle. Then the 3rd launched a massive offensive push through the Austrian lines, crushing the bulk of them.

The Serbian Second Army was, due to its position in the center of the northwestern cordon formation, the strongest of the three armies, not in term of numbers but of the quality of its divisions (the largest was the First Army, which was assigned to protect the entrance to the Morava river valley. This being the best possible approach to Serbia
Serbia
Serbia , officially the Republic of Serbia , is a landlocked country located at the crossroads of Central and Southeast Europe, covering the southern part of the Carpathian basin and the central part of the Balkans...
due to the lack of natural defenses, unlike the mountainous northeast and northwest). It consisted only of the divisions of the first call up (prvi poziv), of soldiers in their 20's and with the best training and materials available. These were the Šumadijska, Moravska, Dunavska (which, being responsible for the defence of Belgrade, had additional regiments attached to them) and Kombinovana (combined) divisions. This organizational structure was chosen by Field Marshal Putnik
Radomir Putnik
Radomir Putnik, also known as Vojvoda Putnik, OSS OCT OKS GCMG was a Serbian Field Marshal and Chief of General Staff in the Balkan Wars and World War I, and took part in all wars that Serbia waged from 1876 to 1917.-Biography:...
not just to have a strong center, but also, due to their central position, the Second Army's divisions could at any time be attached to either the First or Third army if the strategic development dictated such an action. Hence, when there was no longer any doubt about the direction of the Austro-Hungarian invasion, the Serbian cordon conducted a regrouping (movement of app. 90 degrees counterclockwise) of all of its armies and the Second Army faced von Franck's Fifth Army (the only Austro-Hungarian field army which had crossed into Serbia in full strength) at Cer and Jadar valley.

During August 1914 a battle was waged in the area of Mt. Cer
Cer (mountain)
Cer is a mountain in western Serbia, 30 kilometers from Šabac, 100 kilometers west of Belgrade. The highest peak is 689 m high.During World War I, the Battle of Cer was fought on Cer, in which Serbian forces defeated Austria-Hungary....
, in which around 200,000 Austro-Hungarians fought against 180,000 Serbs. The main battle at Cer lasted from August 16 to August 19. The Serbian Army was victorious, pushed the Austro-Hungarian Army back across the Drina river, and completely thwarted their war plan. Following the crossing of the Drina river by the units of the Austrian 5th Army, it's units were persistently harassed by the irregulars of the Jadar Chetnik Detachment, which slowed down their advance. This, along with the persistent defense of the Serbian 3rd Army allowed the divisions of the 2nd Army to take control of the ridges of mount Cer, which proved decisive during the course of the three day battle.

Around 18,500 Austro-Hungarian officers and soldiers were killed or wounded and around 6,500 were captured. The Serbian Army lost around 4,785 and 250 officers. As a result of the battle Austria-Hungary withdrew from Sandžak, delaying their offensive into Serbia. Austria-Hungary continued offensives into Serbia for the rest of the autumn of 1914 without much success. Cer also gave the Entente
Triple Entente
The Triple Entente was the name given to the alliance among Britain, France and Russia after the signing of the Anglo-Russian Entente in 1907....
their first victory of the war against the Central Powers.

Another thing of great importance during the Cer battle was Putnik's unwillingness to conduct aggressive offensive maneuvers (this was also the case in the First Balkan War
First Balkan War
The First Balkan War, which lasted from October 1912 to May 1913, pitted the Balkan League against the Ottoman Empire. The combined armies of the Balkan states overcame the numerically inferior and strategically disadvantaged Ottoman armies and achieved rapid success...
) due to his fear of unnecessary risk which could lead to higher casualties in the already undermanned Serbian army. An example was when he overruled General Stepanović's proposal on the eve of the third day of the battle. Stepanović sensed that Austro-Hungarian forces on Cer and Everk were beginning to crumble, so he suggested a bold maneuver in which his Kombinovana and Moravska divisions would conduct a forced frontal pursuit of opposing troops on Cer and Everk ridges, whilst the Cavalry and Timočka (this division was hardly used during the entire course of the battle, to significant disadvantage regarding the outcome) divisions would conduct a parallel pursuit on the northern slope of Cer towards Lešnica, with orders to attack both the enemy's flanks and to reach the pontoon bridges on the Drina river and therefore cut the Fifth Army's main line of retreat. If this maneuver had been conducted, the possibility of a more catastrophic defeat of the Austro-Hungarian forces was significant. Yet, Putnik ordered Stepa to pursue the enemy forces frontally and not to conduct any sort of flanking attack, which would, in itself, cause far larger casualties upon the retreating enemy. The Third Army's loss of contact with the enemy on the third day of the battle also helped the Austro-Hungarian Fifth Army to withdraw in a more orderly fashion. Considering this, it is probable that the invading force could have suffered a far costlier defeat had Putnik allowed more independence to his field commanders instead of his attempt to micromanage operations. A reason for this may lie in his early command experiences in the wars with Turkey and Bulgaria, where some exceedingly ambitious plans led to disasters in the field.
The source of this article is wikipedia, the free encyclopedia.  The text of this article is licensed under the GFDL.