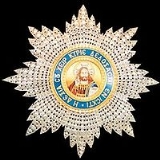 Encyclopedia
The Order of the Redeemer , also known as the Order of the Savior, is an order
Order (decoration)
An order or order of merit is a visible honour, awarded by a government, dynastic house or international organization to an individual, usually in recognition of distinguished service to a nation or to humanity. The distinction between orders and decorations is somewhat vague, except that most...
of Greece
Greece
Greece , officially the Hellenic Republic , and historically Hellas or the Republic of Greece in English, is a country in southeastern Europe....
. The Order of the Redeemer is the oldest and highest decoration awarded by the modern Greek state.

Among those who were first awarded the Grand Cross of the Order of the Redeemer were King Ludwig I of Bavaria
Ludwig I of Bavaria
Ludwig I was a German king of Bavaria from 1825 until the 1848 revolutions in the German states.-Crown prince:...
, the father of King Otto of Greece
Otto of Greece
Otto, Prince of Bavaria, then Othon, King of Greece was made the first modern King of Greece in 1832 under the Convention of London, whereby Greece became a new independent kingdom under the protection of the Great Powers .The second son of the philhellene King Ludwig I of Bavaria, Otto ascended...
, in 1833; Andreas Miaoulis in 1835, Baron Guenther Heinrich von Berg on 21 February 1837 Petrobey Mavromichalis
Petros Mavromichalis
Petros Mavromichalis , also known as Petrobey , was the leader of the Maniot people during the first half of the 19th century. His family had a long history of revolts against the Ottoman Empire, which ruled most of what is now Greece...
, Alexandros Mavrokordatos and Lazaros Kountouriotis in 1836, Andreas Zaimis
Andreas Zaimis
Andreas Asimakou Zaimis was a Greek freedom fighter and government leader during the Greek War of Independence.Born in Kalavryta, in the northern Peloponnesos, Zaimis was a leader of armed men who fought the Ottoman Turks, ultimately securing Greece's freedom.In 1826, Zaimis was chosen as the...
, Theodoros Kolokotronis
Theodoros Kolokotronis
Theodoros Kolokotronis was a Greek Field Marshal and one of the leaders of the Greek War of Independence against the Ottoman Empire....
and Georgios Kountouriotis
Georgios Kountouriotis
Georgios Kountouriotis was a Greek ship-owner and politician who served as prime minister from March to October 1848. He was born in 1782 on the Saronic island of Hydra to an Arvanite family...
in 1837, and Constantine Kanaris
Constantine Kanaris
Constantine Kanaris or Canaris was a Greek Prime Minister, admiral and politician who in his youth was also a freedom fighter, pirate, privateer and merchantman.-Early life:...
in 1864.

Currently, the ranks of the Order of the Redeemer are conferred by the Greek
Greece
Greece , officially the Hellenic Republic , and historically Hellas or the Republic of Greece in English, is a country in southeastern Europe....
government upon distinguished Greek citizens who have defended the interests of their country in time of war or have rendered highly exceptional social services in Greece or abroad. The Order is also conferred upon eminent persons who are not Greek citizens.

The Order has five classes: 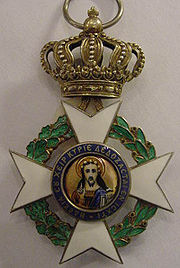 The form of the insignia has altered in several respects in the 170 years since the establishment of the Order. Today, the badge of the Order consists of a white enamelled cross pattée
Cross pattée
A cross pattée is a type of cross which has arms narrow at the centre, and broader at the perimeter. An early English example from the start of the age of heraldry proper A cross pattée (or "cross patty", known also as "cross formée/formy") is a type of cross which has arms narrow at the...
, in silver for the Silver Cross and in gold for the other grades, set on a green enamelled wreath, one half of which is an oak
Oak
An oak is a tree or shrub in the genus Quercus , of which about 600 species exist. "Oak" may also appear in the names of species in related genera, notably Lithocarpus...
branch and the other half a laurel
Bay Laurel
The bay laurel , also known as sweet bay, bay tree, true laurel, Grecian laurel, laurel tree, or simply laurel, is an aromatic evergreen tree or large shrub with green, glossy leaves, native to the Mediterranean region. It is the source of the bay leaf used in cooking...
branch. The central disc bears an icon
Icon
An icon is a religious work of art, most commonly a painting, from Eastern Christianity and in certain Eastern Catholic churches...
of Jesus
Jesus
Jesus of Nazareth , commonly referred to as Jesus Christ or simply as Jesus or Christ, is the central figure of Christianity...
, the Redeemer of Orthodox Christian
Eastern Orthodox Church
The Orthodox Church, officially called the Orthodox Catholic Church and commonly referred to as the Eastern Orthodox Church, is the second largest Christian denomination in the world, with an estimated 300 million adherents mainly in the countries of Belarus, Bulgaria, Cyprus, Georgia, Greece,...
soteriology
Salvation
Within religion salvation is the phenomenon of being saved from the undesirable condition of bondage or suffering experienced by the psyche or soul that has arisen as a result of unskillful or immoral actions generically referred to as sins. Salvation may also be called "deliverance" or...
; this is also made of enamel. The icon is surrounded by this inscription on a blue enamelled ring:

The reverse of the medallion carries the inscription:

Η ΕΝ ΑΡΓΕΙ Δ´ ΕΘΝΙΚΗ ΤΩΝ ΕΛΛΗΝΩΝ ΣΥΝΕΛΕΥΣΙΣ - 1829
("The IV National Assembly of the Hellenes at Argos
Argos
Argos is a city and a former municipality in Argolis, Peloponnese, Greece. Since the 2011 local government reform it is part of the municipality Argos-Mykines, of which it is a municipal unit. It is 11 kilometres from Nafplion, which was its historic harbour...
- 1829")

The star of the Order is an eight-pointed faceted silver star with the same central disc as on the badge of the Order. At first the stars were embroidered; later, stars made of solid silver prevailed, as is the case today.

The ribbon of the Order is light blue, with a narrow white border on both edges, reflecting the Flag of Greece
Flag of Greece
The flag of Greece , officially recognized by Greece as one of its national symbols, is based on nine equal horizontal stripes of blue alternating with white...
.