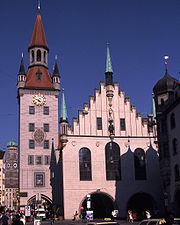 The Old Town Hall until 1874 the domicile of the municipality
Municipality
A municipality is essentially an urban administrative division having corporate status and usually powers of self-government. It can also be used to mean the governing body of a municipality. A municipality is a general-purpose administrative subdivision, as opposed to a special-purpose district...
, serves today as a building for the city council in Munich
Munich
Munich The city's motto is "" . Before 2006, it was "Weltstadt mit Herz" . Its native name, , is derived from the Old High German Munichen, meaning "by the monks' place". The city's name derives from the monks of the Benedictine order who founded the city; hence the monk depicted on the city's coat...
. The Old Town Hall bounds the central square Marienplatz
Marienplatz
Marienplatz is a central square in the city center of Munich, Germany. It has been the city's main square since 1158.-Architecture:...
on its east side.

The building, documented for the first time in 1310, had its Grand Hall (Großer Saal) constructed in 1392/1394. The former Talburg Gate (Talburgtor) of the first city wall serves as spire. The Old Town Hall was re-designed in late-gothic
Gothic architecture
Gothic architecture is a style of architecture that flourished during the high and late medieval period. It evolved from Romanesque architecture and was succeeded by Renaissance architecture....
style by Jörg von Halsbach
Jörg von Halsbach
Jörg von Halsbach , also called Halspach or Ganghofer was a German bricklayer and architect. He was from Polling and worked in Munich and Freising....
1470-1480. The Grand Hall was decorated by the Morris dance
Morris dance
Morris dance is a form of English folk dance usually accompanied by music. It is based on rhythmic stepping and the execution of choreographed figures by a group of dancers. Implements such as sticks, swords, handkerchiefs and bells may also be wielded by the dancers...
rs, created by Erasmus Grasser
Erasmus Grasser
Erasmus Grasser was a leading sculptor in Munich in the early 16th century.He developed in an animated and realistic style, furthering on the works of Nikolaus Gerhaert...
. After alterations of the facade during the Renaissance the building was restored in neo-gothic style 1861-1864. In 1874 the municipality moved to the New Town Hall
New Town Hall, Munich
The New Town Hall is a town hall at the northern part of Marienplatz in Munich, Bavaria, Germany. It hosts the city government including the city council, offices of the mayors and part of the administration...
.

For the passage of increased road traffic the Old Town Hall was tunneled in 1877 and 1934. During World War II the building was severely damaged and the spire was reconstructed in 1971-1974.

The Grand Hall was the venue for the speech of Joseph Goebbels
Joseph Goebbels
Paul Joseph Goebbels was a German politician and Reich Minister of Propaganda in Nazi Germany from 1933 to 1945. As one of Adolf Hitler's closest associates and most devout followers, he was known for his zealous oratory and anti-Semitism...
on November 9, 1938 which is known as the prelude for the Kristallnacht
Kristallnacht
Kristallnacht, also referred to as the Night of Broken Glass, and also Reichskristallnacht, Pogromnacht, and Novemberpogrome, was a pogrom or series of attacks against Jews throughout Nazi Germany and parts of Austria on 9–10 November 1938.Jewish homes were ransacked, as were shops, towns and...
.
The source of this article is wikipedia, the free encyclopedia.  The text of this article is licensed under the GFDL.